The New York City Council may not get an actual vote on the controversial Trans-Pacific Partnership—but today members and other activists rallied for the passage of a resolution urging Congress to shoot down what they deemed a job-killing deal that would wreck the environment.

“Let’s be honest: TPP is bad for people. TPP is bad for the environment. TPP Is bad for democracy. Let’s be honest, it’s kind of the most dastardly and evil thing you can imagine,” Josh Fox, the filmmaker behind the anti-fracking documentary Gasland, said at a rally on the City Hall steps this afternoon.

The “free trade” pact between the U.S. and 11 other nations has garnered intense opposition, particularly from labor unions. Others have pointed to potential environmental impacts. Opponents of the trade deal say it is being negotiated in secret—and have derided President Barack Obama’s request to have “fast-track” authority over the treaty, which would give him alone the power to negotiate the deal and leave Congress with only a yes or no vote, and no ability to make amendments.

Zephyr Teachout, a Fordham University law professor who mounted a left-wing primary challenge to Gov. Andrew Cuomo, compared the trade pact to the Supreme Court’s decision in Citizens United, which critics argue has funneled too much corporate cash into politics.

Councilman Donovan Richards, chair of the environmental committee, said the fast-track alone is a sign something’s not right.

“You automatically know something is wrong with it, and obviously there’s some secrecy. There’s some things being hidden from us,” Mr. Richards said.

Mr. Richards made reference to the city’s lone elected official who has been visibly supportive of the TPP—Congressman Gregory Meeks, whose district overlaps with his own. Mr. Richards wondered how Mr. Meeks could support the TPP—which opponents say will send jobs overseas—when they represent an area with high unemployment rates.

Mr. Meeks has heard an earful from his colleagues of late—receiving letters urging him to change his mind. Today Pete Sikora of the Communications Workers of America said if Mr. Meeks remains in support, he could face consequences on Election Day.

Mr. Meeks, meanwhile, said that while the Council members and activists were rallying, he was holding a meeting with constituents about the trade deal. He said most people simply don’t know much about the deal but are receptive when learn more.

“The overwhelming majority are very supportive of the president’s trade agenda, because it’s part of his overall agenda of bringing back the economy of the United States,” Mr. Meeks told the Observer in a telephone interview.

He argued the trade deal would be good for the local economy by increasing importing and exporting—noting his district includes the John F. Kennedy International Airport—because one in five city jobs are “related to trade.” And he said the trade pact would make it easier for local small businesses to create goods and sell them overseas.

“What are the problems oftentimes, is that the markets in some of these other countries are not open to us,” he said, even as the U.S. is open to other nations. He also argued the pact would beef up requirements of other nations to pay their workers more, helping to even the playing field.

Asked why so many of his fellow Democrats saw the trade deal in a totally different light then he did, Mr. Meeks pointed to the influence of his “good friends in labor.”

The congressman said that while activists have denounced negotiations as “secretive,” details have always been available to members of Congress. He said airing more publicly would tip the nation’s hand in negotiations. He said he supported fast-tracking the trade pact because the same has been afforded to other presidents.

“I think that he should be given the authority to have a negotiation and then bring it back to the House and then all of us can vote up and down whether we approve,” Mr. Meeks said.

Ms. Teachout said she hoped Mr. Meeks would be open to changing his position, and said with grassroots outreach like that around New York’s fracking ban, the deal could be stopped.

“I don’t think this is a minor concern—I think this is a disaster. I think more and more staffers are hearing that. I hear Meeks is open, and I hope he’s open. But I think you’re going to hear more and more protesting. I’m going to be sending out emails to Meeks’ constituents for sure,” Ms. Teachout told the Observer after the rally.

She noted that one of the trade deal’s biggest supporters—besides Mr. Obama—is Republican Congressman Paul Ryan.

“Paul Ryan is not popular in New York State, and an alignment with the hard-right Republicans does not make you look good as a New York politician,” she said.

But Mr. Meeks is not totally alone in his support of the trade deal—though few other elected officials in New York have joined him in supporting it, the Kathryn Wylde, president of the business group Partnership for New York City, urged the Council not to pass its resolution in testimony today.

“Countries negotiating the Trans-Pacific Partnership purchased 25 percent of the New York Metro region’s exported goods in 2013. When it comes to export of services, firms in New York City—in finance, technology, media, business and professional services, and real estate—have a substantial footprint in global trade, accounting for $31.9 billion, or 58 percent of the state’s total exports,” Ms. Wylde said in her testimony.

The resolution was introduced by Councilwoman Helen Rosenthal, and is slated to be voted on by the full Council tomorrow.

This story has been updated to include an interview with Mr. Meeks and the testimony of Ms. Wylde. 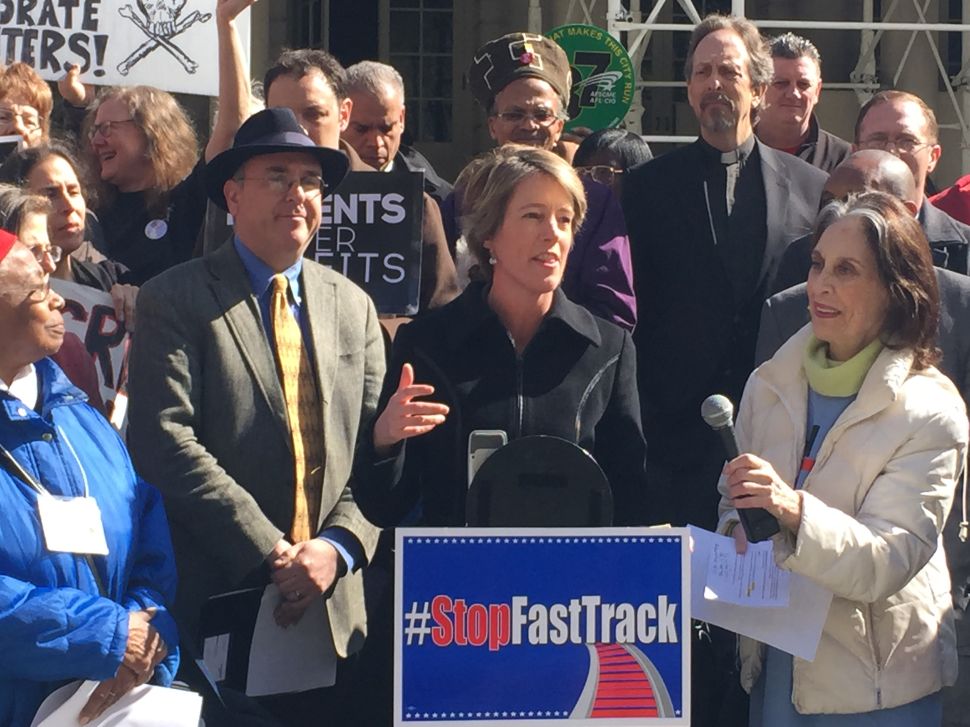