DALLAS—”We love the collectors down here,” Stefania Bortolami told me at her gallery’s booth at the Dallas Art Fair.  And, oh, how does she love those flashy, jewel-bedecked Dallas collectors—she’s already managed to sell a work by Piero Golia for a sum of $35,000. That’s a Texas-sized price tag when it comes to this kind of a fair. A ten-gallon hat of a price tag. She noted that the artist is set to build one of his infamous chalets at the Nasher Sculpture Center down the street this fall, and that while the oil-slicked millionaires here like to throw money at anything shiny, they also like supporting the hell out of Dallas.

It’s very early to speculate and surmise, as the fair opened to VIPs just this morning and a good chunk of the sales will happen at tonight’s ultra glitzy preview gala, but there’s an air of excitement here in Dallas, land of society ladies with hair piled and pampered and pompadoured to the sky, land of the Aston Martins of robber barons valet parked in sprawling lots, land of giant bloody steaks and the cattle killed to cook them. For one thing, New York is well-represented down here. A coterie of artists usually sequestered to a few blocks of Soho managed to make the trek to the opening of their old pal Nate Lowman’s show at Dallas Contemporary, “America Sneezes,” which opened last night alongside shows by David Salle and Anila Quayyum Agha.

The centerpiece of the show was a massive map of this grand nation we live in, each state its own work, the blotched and scratched and splattered canvases stretched across intricate cartography. And to view this mirror of America, visitors sat on that most American roost: metal bleachers—metal bleachers of football games, metal bleachers of making out in secret.

“I just told them to get me some bleachers, because it’s Texas, and the bleachers are ubiquitous,” Mr. Lowman told me after the show. He was wearing a totally baller Redman and Method Man sweater and red Marlboro cigarettes sweatpants. “You can find bleachers on the side of the road.”

We were talking while standing on the roof of The Joule, a funky Mecca of Austin-style hip in this cosmopolitan play world of Saudi and Texan oil moolah, staring across the street at Eye, a 30-foot-tall statue of an eyeball by Tony Tasset that’s achieved some local notoriety. It’s seen as an ever-judging God’s Eye, the concept of Ralph Waldo Emerson’s metaphorical Transparent Eyeball followed to its inevitable end. And did that eye of God ever judge the party’s next decision. Everyone chose to accompany Mr. Lowman to the horrifying Texas dive bar Double Wide, joining a party that included artists Aaron Young, Dan Colen, Leo Fitzpatrick, and Jonah Freeman. I called an Uber to get there, a Chevy pickup truck showed up, and I sat outside in the truck bed with the air whipping at my face as we tore out of downtown toward the outskirts of the city.

But even if everybody repairs to a hellhole to drink Lone Star all night, you have to sell art the next morning, and so the dealers looked super spiffy and ready to shill paintings to Texans. The galleries came prepared. In addition to the Piero Golia, Bortolami had a work by Eric Harvey for $20,000. Marlborough Chelsea has a show-stopping Tony Matelli that looks like the remnants of a frat party—a beer box, a house of cards, a keg of beer, beer cans, solo cups—but is actually all cast-bronze, recreated, handmade.

That is, almost all of it is handmade.

Mr. Matelli could have used old Lone Stars instead of old Bud Lights to personalize it for Texas, but Mr. Levai said a lot of the work was indeed set aside with Dallas in mind.

“It’s our third year at the fair and we have a lot of people down here who come see us,” he said.

Elsewhere, Richard Phillips—Dallas Contemporary’s newest board member—perused the Massimo De Carlo booth accompanied by a leggy brunette. There were works by Aaron Young there, but Aaron Young was not, perhaps one consequence of staying too late at the Double Wide, alas. At the booth for Galerie Perrotin, two older women who had had, um, work done gaped at the offerings on display, which included the perfunctory Daniel Arsham sculpture and an oddity from KAWS.

I ran into prominent Dallas collector Derek Wilson at the Johannes Vogt booth, which was showing a few works by the young Dallas-based artist Josh Reams, and after gushing about how awesome Monday’s NCAA national championship game was (as I’ve mentioned in these pages, Mr. Wilson and myself are both proud graduates of Duke University) I asked if he had already bought anything.

“There’s a gallery downstairs, based out of Turin, Luce Gallery, and they have a solo booth of Hugo McCloud.”

I told him I’d seen his work at Sean Kelly Gallery some time back, liked it, good stuff, cool guy.

“Well, we visited Hugo’s studio a few weeks back, and we just loved it, so we bought one of those.”

When I asked a Luce Gallery dealer for the prices of the McClouds, he said they went up to $27,000.

a building in downtown Dallas, presenting works by Landon Metz ($15,000) and Berta Fischer ($14,000) among others. Director James Michael Shaeffer told me that half the booth is already on reserve.

Indeed, the gala is where most of the sales happen, where the ladies of Dallas society put up their hair and the oilmen down Ruinart champagne. Where fortunes reaped from the land get spent on the beauty of art. It starts in an hour. I’ll try to forget about the Transparent Eyeball judging us all. 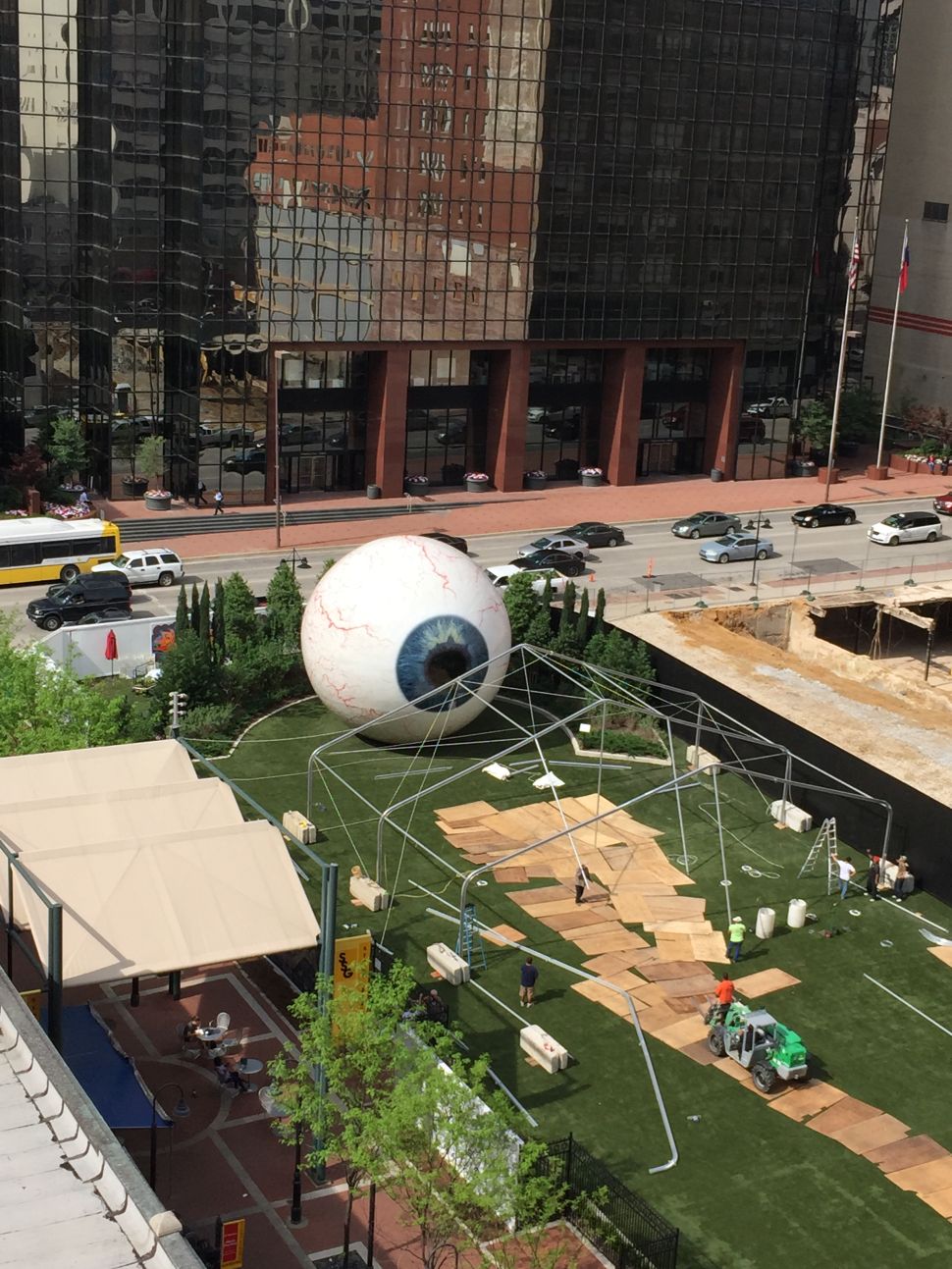