Mr. Jeffries announced the legislation today outside One Police Plaza, standing alongside Gwen Carr, whose 43-year-old son Eric Garner was killed after police officer Daniel Pantaleo used what appeared to be a chokehold while attempting to arrest him for selling untaxed cigarettes. A Staten Island grand jury opted not to indict Mr. Pantaleo.

“We are here today in the memory of Eric Garner to introduce the Excessive Use of Force Prevention Act of 2015. This legislation will make the use of a chokehold unlawful under federal civil rights law. The chokehold is the classic example of an unnecessary violent police tactic,” Mr. Jeffries said today. “It is an unreasonable measure. It is an uncivilized measure. It’s an unnecessary measure. And this bill will make it an unlawful measure.”

Ms. Carr said she would be her son’s voice, and said the legislation was necessary for not just people in New York but people around the country. Just hours after she spoke, looting and violence gripped the streets of Baltimore in response to alleged police brutality.

She argued her son had not been committing the nonviolent crime he was accused of—and he’ll never get to defend himself in court.

“Why should anyone lose their life through a chokehold?” Ms. Carr asked. “You have murderers, rapists everybody out there—they get their day in court. My son he won’t get his day in court, because he’s gone now.”

The legislation would outlaw chokeholds as part of the “Deprivation of Rights Under Color of Law” segment of the civil rights statute, and uses the same definition for chokeholds that the NYPD uses in its patrol guide.

Mr. Foy said he believed the legislation would make it easier for federal authorities to intervene and bring charges under the civil rights statute—something the Department of Justice is considering doing in the Garner case, and has done in a prior instance of a chokehold, when NYPD Officer Francis Livoti was convicted of a civil rights violation in the chokehold death of Anthony Baez, after Mr. Livoti was acquitted in a state trial.

But as it’s part of the civil rights statute, the legislation—which applies to government actors like law enforcement—would still only apply if someone were targeted for his or her race, ethnicity or immigration status, Mr. Jeffries allowed.

“There’s an additional threshold that needs to be crossed, which involves the deprivation of one’s civil rights having occurred because of the person’s race, ethnicity, or immigration status—that won’t change,” Mr. Jeffries said.

“I don’t think there’s a reasonable argument for the mayor or anyone in this administration to oppose the effort at the city level, the state level or at the federal level,” he said. “And we’re gonna move forward as aggressively as necessary to get this done.”

Mr. de Blasio told reporters today during a press scrum that he did not believe the federal law was necessary and that dealing with chokeholds was best left to the NYPD.

“I think to act legislatively on top of police department regulations is a mistake,” Mr. de Blasio said.

He said officers in certain life-or-death situations—he used the example of a one-on-one subway platform confrontation—might need to use a chokehold as an “acceptable option” to stay alive.

“When we talk about the chokehold issue more broadly, it’s quite clear in department regulations that chokeholds are not acceptable under any normal circumstance and we are making that very, very clear in the retraining of all our officers,” he said. 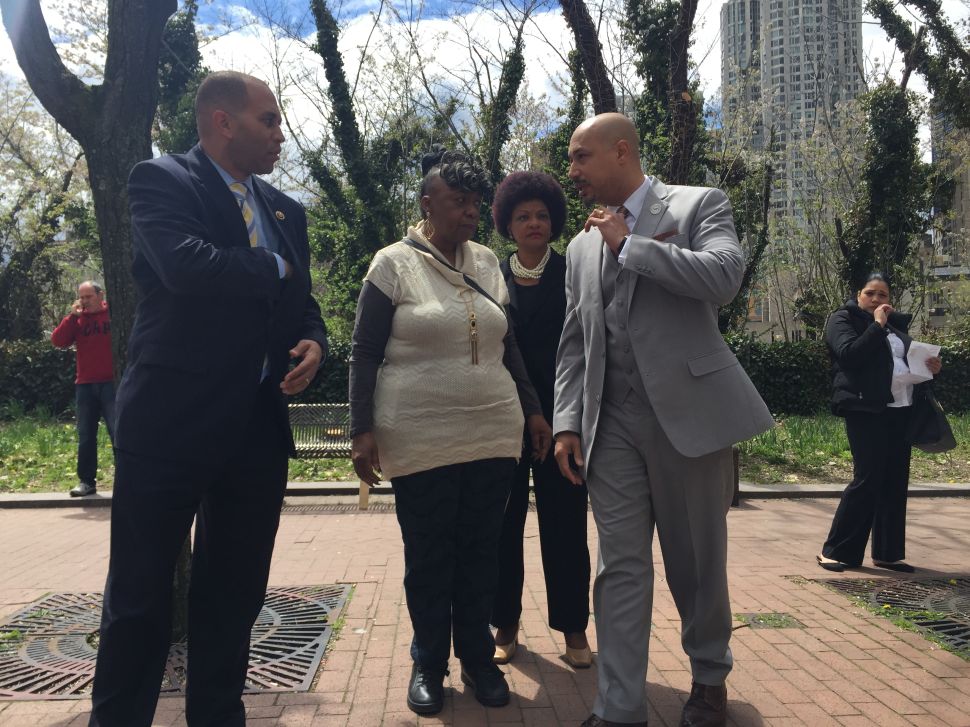