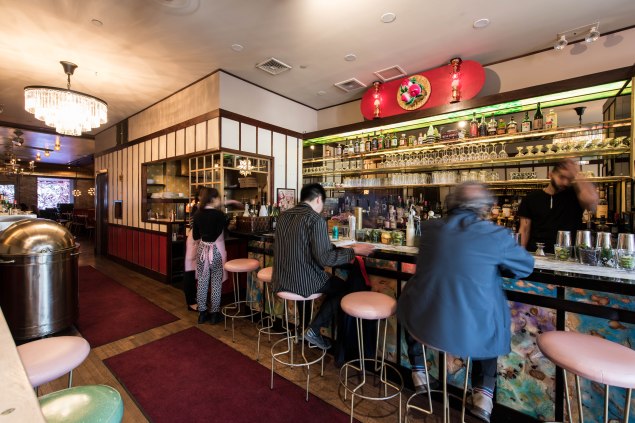 The new Mission Chinese represents both a great leap forward and a return to form for Danny Bowien. (Photo: Francesco Sapienza)

I really got into it last night with my wife. Does food deserve to be considered as seriously and somberly as art? The argument arose from watching the new Netflix series Chef’s Table, whose first episode focuses on the Italian chef Massimo Bottura. Mr. Bottura’s cuisine is as highbrow and fine as the art that moves him. (According to his wife, he was inspired to open Osteria Francescana by Maurizio Cattelan’s installation of taxidermied pigeons at the Venice Biennale.)

Mr. Bottura speaks of his mission with the surety of an impressionist at the Salon de Refusés whose radical vision has been ratified by time. My wife rolled her eyes throughout. For her, food does not merit serious consideration. The lofty analysis of what a restaurant might mean, or the portrayal of chef in the pose of a heroic artist, smacks of self-indulgence. That really gets my goat.

Certainly, there are differences between dinner and what one finds at MoMA. (Though the new restaurant, Untitled at the Whitney, further smears the line.) One can’t eat a painting, unless it’s a Vik Muniz. And a chef must sell his creations hundreds of times an evening, thousands of times a year, whereas an artist has only to blow a curator once. But in my opinion, these are cosmetic differences, due to the peculiarities of the media in question: oil vs. olive oil, watercolor vs. watermelon, marble vs. ma po.

We were discussing Mr. Bottura, but I was thinking about Danny Bowien, at whose restaurant I had eaten a few nights before. As anyone with a mouth hole knows, Mr. Bowien opened his flagship restaurant Mission Chinese Food last December in a sprawling space on East Broadway after his original New York location was shuttered by the Department of Health. As with his first go-round in New York, this second reincarnation became immediately as hot as a solar flare. The restaurant doesn’t take reservations but that doesn’t matter anyway. You’d never get in.

That Mr. Bowien is a whirligig creative genius is by now a platitude, as true and unexamined as doctor’s warnings on cigarette boxes: Quitting Bowien Now Greatly Reduces Serious Kicks To Your Mouth. I’m as tired of hearing about him as I’m sure he is hearing about himself. What interested me most about the 32-year-old chef was how, and if, he could preserve that spark of creativity in the wind tunnel of hype.

Across from Seward Park, the new Mission Chinese isn’t too far from the type of banquet Chinese restaurants that serve so obviously as its inspiration. The lights are lower, though more colorful. The crowd is denser, younger and more beautiful. And the music is so loud, so sonically jostled, the sweet and smoky Beijing vinegar peanuts on one’s table vibrate with every bass note of Danzig’s “Mother.” But the brown leather menus are as thick and the options as manifold as at Jing Fong or Oriental Garden. 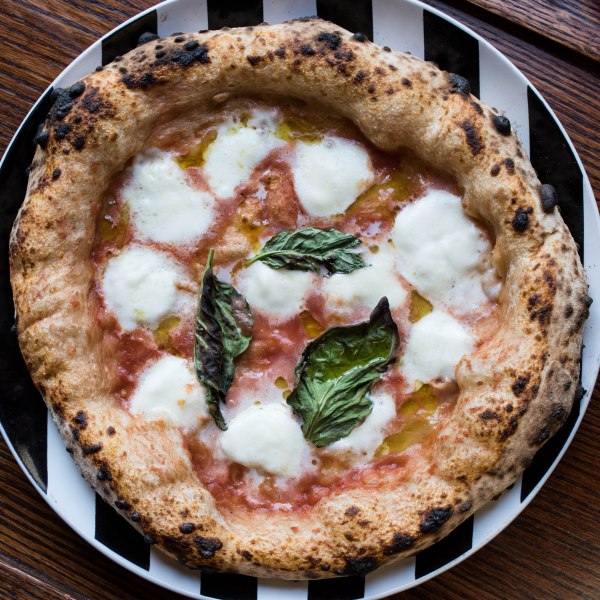 Like a peculiar loop, one element of Mr. Bowien’s signature, to be found in all his restaurants, is the deployment of Sichuan pepper. Though clearly descended from his devotion to Sichuan cuisine, I suspect the peppers appeal so much to the chef because they are discombobulating. Chemically, the peppers—not actually peppers or chilis, by the way, but the fruit of a Chinese prickly-ash—befuddle the taste buds. As anyone who has eaten them knows, they tingle the tongue, in a way we identify as spicy but is truly beyond flavor categorization. Hence, when they appear in Mr. Bowien’s famous meaty ma po tofu ($13) or the spicy peanut noodles ($13)—which bleeds carmine with Sichuan pepper numbing oil—they send a body into flavor free-fall, deep into the Wonka tunnel and its paddlewheel of spice and sweet. One ends up meaty in one case, nutty in the other but delightfully wounded nonetheless.

Much has been written about the anomalous D.O.P. cheese pizza Mr. Bowien offers for $14, right there in hot appetizers, like a continuity error in a movie. Or the frequent cameos by actors from Bollywood and beyond who appear on the menu. Or the bread, a sort of pita served with a slightly sour kefir butter. None of this surprise is, of course, surprising. Mr. Bowien’s tastes have always been catholic, hectic and inclusive.

What was surprising and edifying is how the new Mission Chinese represents both a great leap forward and a return to form for the chef. In one way, though larger and louder than its first subterranean home, the menu is quieter. There are moments of repose and restraint. The entire vegetable section, for instance, is a triumph. Mr. Bowien, who about stopped eating meat about two years ago, is an attentive consigliere to celery, which he quickly stir-fries, accompanies with raw hazelnuts and leaves to its own devices. The masala milk, in which the Napa cabbage is steamed, renders the leaves as tender and sweet as a lullaby. The peanut milk, which replaces the traditional tentsuyu underneath the agedashi turnip cake, that old dim sum chestnut, mimics the mellow silky flavor of the warm cake. Many of the dishes are followed by a superscript “V,” indicating they can be made without meat and in some cases, as with the thrice-cooked bacon with shanghai rice cakes bitter melon and soft tofu skins ($16), the result is even better. That one, by the way, is like the chandeliers hanging from the ceiling: perfectly balanced and slightly humming. Sia would be proud.

Mr. Bowien went through a real weird time in late 2013 and the early parts of the following year. Mission Chinese had been closed by the Department of Health. Some blame it on the shady mouse-forward landlord, but Mr. Bowien blames himself for not being punctilious enough an owner. Then he opened Mission Cantina, which I rather enjoyed but which Pete Wells rather didn’t and which now Mr. Bowien calls a failure. The pan in the Times arrived the same day Mr. Bowien’s son, Mino, was born. He was by his wife’s side but obsessing over the review. Then, of course, there were the schizophrenic kiss-kiss poop-pee gyrations of a foodie scene that hates and loves in equally intense oscillations. All this is simply to say that Mission Chinese’s success was not a sure thing.

To an extent much larger than I had imagined, Cantina’s poor reception profoundly affected Mr. Bowien. “I was trying to make everybody happy by playing it safe,” he says. “Here, I’m doing what we’re doing for ourselves.” When he said that, I got the same tingly feeling you get not from a Sichuan peppercorn, but, for instance, when your kid falls off his scooter and gets back on, more determined. It’s something like sadness, love and admiration.

Danny Bowein is a real charming dude. I can’t tell if the admiration he incurs is due to what he feeds people who come into his restaurant or his winning personality. Honestly, at Mission Chinese, I don’t think there is a difference. What made me think about Mr. Bowien when arguing about Mr. Bottura is that both men, like all great artists, effortlessly channel their personality into their work. The pizza, which seems a prank (and with a sourdough starter from Tartine bakery in the crust, a sour one at that), is an extension of how Mr. Bowien would treat his chef friends in San Francisco, and later, here in New York. Far from being a laugh, it’s a generous gesture. The masala milk and other nut milks are an incorporation of a meal he had at the South Indian restaurant Saravana Bhavan. This isn’t a matter of new historicism, trying to tie the elements in a work to the author’s “real life.” Cooking is different in that regard, cooking like this at least, in that there is no division.

And the drama here, in Mr. Bowien’s case—and Mr. Bottura’s and probably many other chefs—is the same drama felt by artists since time immemorial: the need to express oneself, the courage to do so, and the skill to pull it off. The newest Mission Chinese shows Mr. Bowien is in command of all three. 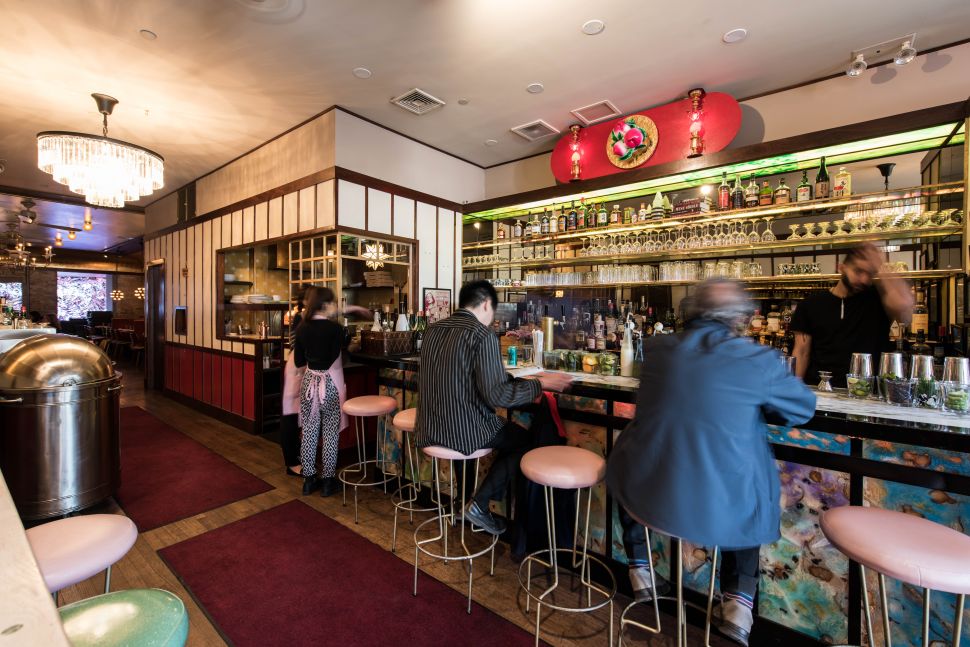