Based on the first episode of Daredevil, I was really excited to see some intense courtroom action scenes from this show. Objections, and opening statements, and tort reforms, and verdicts. Well, I was let down this week. But have no fear! It looks like this episode is actually going to be all about the majestic punch-ballet that is boxing. The Sweet Science. The Uppercut Mambo. The Jab Tango. I am so down with that. Matt Murdock’s dad joins a slew of famous boxer characters who make terrible career decisions. There’s Butch in Pulp Fiction, who blows a great career by running off with possibly the most annoying character in movie history—Fabienne “I want a pot belly, what’s a chopper, who is Zed?” There’s Robert E. Lee Prewitt in From Here to Eternity, who swore never to box again after he blinded a guy in a fight and then got hazed straight into Pearl Harbor by his unit. There’s Maggie Fitzgerald, the million dollar baby whose success let Clint Eastwood make J. Edgar (unforgivable!). And now there is Battling Jack Murdock, the Brad Pitt in Snatch of Hell’s Kitchen.

Matt Murdock is curled up in a ball in a dumpster. A kid finds him and brings Claire Temple, played by Rosario Dawson, to help him. They get him up to her couch even though he is a highly punctured strange man in a black mask. Claire has a magical bag of medical supplies and gloves at the ready. It makes sense, we find out she is a nurse. While she tries to fix Matt up, he flashes back to the good old days. Young Matt watches his dad get beat into submission. When Jack Murdock gets home, his face looks like he tried to break into Kevin McCallister’s house when his parents weren’t around. Jack gives Matt some Scotch so his hands won’t shake while he stitches him up. Matt is like at most 11, I guess? You know, when going blind is a major life upgrade? When you don’t have to sew up your dad’s face on a regular basis anymore. “Hey dad, so I can’t see now, you can get sewn up at the gym before you come home, right? Cool. Yeah, things are really looking up for me now that I can’t see anymore, thanks.”

Claire wants to know what Matt’s deal is and why she should continue to help him. It doesn’t make a ton of sense that she is, especially if he dies in her apartment—it’ll look like her fault. But it becomes clearer when Claire reveals that she has come in contact with some victims of the “man in the black mask” during her work at the hospital.(This is exactly the scenario I mentioned in regards to episode one. I am so down to see this become a medical procedural that takes place in the hospital, where the doctors have to treat the wounds and diseases of these thugs getting roughed up by our hero.) So people are talking about the good that Daredevil is doing and Claire wants to believe in it. Matt explains that these Russian gangsters kidnapped a kid at the end of the last episode and he was going after them but it was a trap. They jumped him and that’s how he got hurt. They’re still after him and Matt can smell one of the guys in Claire’s building. The thug is pretending to be a cop going door to door asking about a robbery. Claire lies to him, but Matt can smell or hear or taste that he doesn’t believe her, so as the guy is going down the stairs, Matt drops a fire extinguisher precisely on his head like the chainsaw staircase move from American Psycho. It is excellent. They bring the guy up to the roof and torture the information out of him by stabbing him right above the eye (they really always go for the eyes in this show). Matt tells the thug that he really likes torturing him. You know what Matt doesn’t like it? Me, I don’t like it. I don’t ever want to see anyone touch another person’s eyeball ever;I don’t care how bad they are. I don’t even ever want to see a bus ad for The Strain ever again. But Matt gets the info of where the kidnapped boy is and throws the thug off the roof into the dumpster that Matt started out in earlier. Full circle. Claire doesn’t believe that Matt actually likes torturing thugs but he is very determined to not let the fear win, ever.

In a flashback, we learn the story of Jack Murdock. He had begun to throw fights,but it didn’t sit with him very well because his whole ethic is all about getting knocked down and then getting back up. This is why Matt Murdock can take such a beating as a superhero—he learned it from his dad. It’s in his dumb Murdock blood. Jack gets an opportunity at a big fight but he has to take a dive. It’s really hard for Jack to do because he can finally afford to pay his rent now and he’s not used to do anything that would be actually strategic, he’d prefer to get his faced smashed in by life until the fight is called. You know how many dives I would take if I was already a boxer who never won? All of them. Every single dive. Triple-damn-Lindy dives. Jack doesn’t realize his son has super-hearing now that he is blind and Matt overhears his dad talking about throwing the fight in the fifth round. Also, his dad thinks Thurgood Marshall was starting center fielder for the Mets, so at least he’s a Mets fan, but he keeps playing this “I wasn’t ever so good at book smarts learning” card. Right before the fight, Jack changes his mind, places a secret bet with all his money on him to win, with the purse to go into an account for Matty. He calls a women, I guess Matt’s mom and says a thing about doing something stupid and how Matt’s going to really need her now. I guess he didn’t before?Then Jack destroys Creel in the match by knockout. If Jack was able to knock out any fighter at will, why didn’t he do this all the time? Was he only able to do it when gangsters were going to kill him for it? Jack said he wanted his son hear people cheering his name for once, and he does. Right before he hears the gunshot that kills his dad in an alleyway. For someone whose whole ethos is never give up, it seems like Jack Murdock really threw in the towel on life. Maybe his son could have used his dad alive more than dead, just saying. Why do all boxers always have to be such deep pools of complex ineptitude? Matt was his dad’s cut man. Now Claire is Matt’s cut man. Let’s hope that Matt is more resilient than his dad was.

While this other drama is playing out, Foggy and Karen hit the town because Karen is too scared to go home. She makes a valid point—she was framed for trying to kill her friend in her apartment and his blood is still on the carpet. Then later on, someone broke in and tried to kill her and the dent her head made in the wall when he attacked her is still there. Karen doesn’t seem to have many friends or family in Hell’s Kitchen. If my life was threatened like this and there wasn’t anything to keep me around you know where I wouldn’t be living? In Hell’s damn Kitchen. But Foggy is a good friend (and boss, okay I don’t know if he’s a good boss, he kind of flirts with her in this “I’m just kidding, unless you’re going to do it” way…) and he stays out with her all night so that she doesn’t have to worry about going home. They keep trying to find Matt but he’s busy torturing a guy on the roof they’re walking under.

The final scene shows one long, dingy hallway where the Russian bad guys are keeping this kid. There’s a poker game in one room and some guys listening to a radio or tv in another and a third room farther down. Then at the end of the hall, facing us is a final room where the kid is. Daredevil shows up. It is a “chills up your arms” moment. Something is about to go down. The next four minutes are a choreographed brawl the likes of which you’ve never seen. It looks like it’s all in one shot but I don’t know about cameras, I know that there are body parts flailing and bodies dropping, doors flying open and heads getting knocked. The fight actually takes into account that these guys are tired, and Daredevil has been beat down all episode. He takes breathing breaks and in between punches, it looks like he can barely stand. He leans up against the wall and trips over guys already knocked out on the floor. He does a little mini-kick parkour move out of nowhere and then summersaults in the air onto a guy’s chest. It’s like a beautiful ballet of drunks. When everyone is out cold, he walks into that final door and carries the kid out, leaving all that human debris behind him. It is so so so good. This show is so enjoyable. Here’s hoping we finally get some solid high courtroom action in the next episode, though. 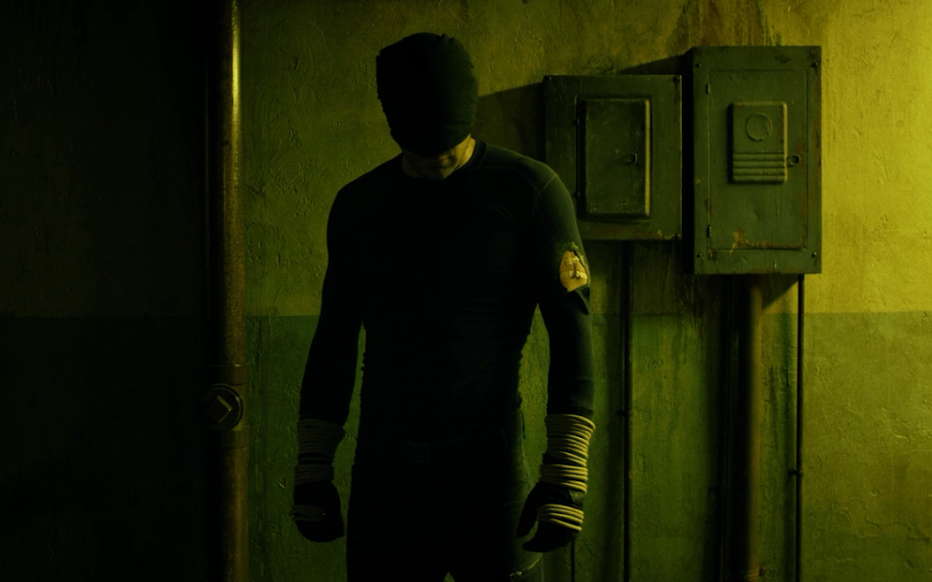