(This interview contains mild spoilers for the first two episodes of Daredevil on Netflix, so proceed with caution if you haven’t fully binged. I guess it also contains spoilers for Ben Affleck’s 2003 Daredevil, but I can’t in good conscious recommend you watch that movie.)

I’ve said it before, and I’ll say it again, Netflix’s first of four Marvel-centric shows, Daredevil, is like nothing you’ve seen under the Marvel Umbrella yet. What it lacks in the grand visual scope of say, an Avengers movie, or the lighthearted rompy-ness of a Guardians of the Galaxy, it makes up for in one critical area — it just kicks so. much. ass.

Blinded as a young boy, Matt Murdock (played here by Boardwalk Empire alum Charlie Cox) is granted the gift of having four out of five super-heightened senses, which he puts to use at night in his crime-riddled home town Hell’s Kitchen by throwing on a black mask and beating criminals to a pulp. Standing opposite of him is Wilson Fisk, AKA the Kingpin, played by a massively framed and impressively bald Vincent D’Onofrio. And that’s the story, a simple one, but it’s filled with enough darkness, impressive performances, and grounded reality to be worthy of your time. And the fight scenes, Jesus, the fight scenes. If you’ve watched through by now, you know what I mean. If not, I’ll wait.

Philip J Silvera has a hand in more super heroes punching each other in the face than I can count. He’s done stunt work — as a double, a performer, and as a coordinator — in everything from the Dark Knight Rises to Iron Man 3 to Thor: The Dark World. As Daredevil’s fight and stunt coordinator, he’s the man behind the kicking of ass in Netflix’s latest series, including a one-take fight scene in episode two that would make Rust Cohle blush.

I hopped on the phone with Mr. Silvera, who was in Vancouver working on set of Marvel’s Deadpool (Mr. Silvera designed that test footage that drove everyone crazy three years ago), to talk about making a blind man fighting child traffickers look so damn cool.

OBSERVER: I was completely blown away by the fight scenes in Daredevil. What was your mindset going into Daredevil, about how you wanted everything to look and feel?

PHILIP J. SILVERA: The best thing about these characters, super hero characters, is I want to see how the real world relates to them all. [Daredevil showrunner] Steve DeKnight had a vision on how the characters should be, and I just try and build off of what they saw. But I really wanted to make sure these characters felt a lot more grounded. This wasn’t your Iron Man, this wasn’t your Thor, your Captain America, this was a guy that through sheer will and determination, he just keeps pushing through the pain of everything he goes through.

Was there any added challenges to designing a fight scene for a character that can’t see?

There’s always little challenges around something like that. Charlie Cox has such a great way of interpreting the character that we were able to play off of. At times, there would be the little moments in between knocking a guy down, how would he move forward on them? Would he take a moment to sort of feel where they are, or would he just go in for the charge already knowing because this is something he has done his whole life? He’s been blinded since he was a kid, so part of it feels like second nature by this point. It was just finding that middle ground of how to approach it.

The first notable fight scene comes at the end of the very first episode, a one-on-one confrontation between Murdock and an unknown assailant in the pouring rain. Unlike the 2003 movie, Daredevil does not use the rain to see Jennifer Garner’s sonar face. The two participants use the rain to beat the ever-loving shit out of each other.

The first scene I want to talk about particularly is the scene in the rain.

Right, that’s the final fight of episode 1. That was what got me the job, was previs-ing that fight. [note: a previs, or previsualization, is used to map out complex scenes prior to filming]

Yeah, I think they were still looking for a very specific style. Something that told their story, and they offered me a chance to do a previs, to get the job. It was such a mix of so many different things they were looking for. And the rain was one of them. They wanted longer takes, and more of the boxing style, and grittier. They didn’t want it to look too martial arts-y, but still having style to it all. Within 24 hours I turned in a previs.

How much of that was Charlie, how much was a double, and how’d you go about things like that?

It was a good balance. Charlie would do a lot of things, and then there were things Charlie just wasn’t trained for. And we had a great stunt double, Chris Brewster, who worked great with Charlie. They had a great relationship. But Charlie did a great deal of it, and then the stunt double did things that just were physically out of Charlie’s training.

Can you take me a little bit through the layout process?

Well, number one, the first thing I want to make sure of, it has to relate to the story. If it doesn’t relate to the story, it’s just punches and kicks for no reason. It has to constantly keep the story driving forward. After we do that, we have to find the tone of the fight. We’ll do a concept build, and off our concept build we’ll shoot a previs, shoot it all for approval. Then that’ll be our interpretation of what we think the fight will be like. Then Steve DeKnight, who has a great vision on things, and the actors involved will give us notes. And we’re doing this all in a quick turnover time. As you know this is a TV series, but we’re doing feature film style action. So, we’re constantly cranking one scene to the next. We’re constantly in go mode. There’s no room for error. Early on, there is a great scene in 102 that definitely sets the tone for the show.

The scene Mr. Silvera is referencing, that closes out episode 2, is the aforementioned one-shot, no cuts fight scene. Matt Murdock walks into a den of child traffickers, and what follows is multiple uncut minutes of doors breaking, punches flying and at least one person being hit in the face with a microwave.

I was just about to ask you about that one-shot scene.

I think this was what started defining the show for me, and the weight that was being played into it. Phil Abraham was directing, and it was always scripted that this scene was going to be a one-shot. For me in my head, with the time we had, I said let’s do wipes and we’ll be able save things. But Phil challenged us to do a pure one-shot, which really just brought a grounded real feeling to the whole thing. We were able to slow down the fight, and just have this raw, animalistic  feeling happening.

So it was genuinely one shot? No cuts?

No cuts. We did do a few Texas Switches between our actor and our stunt double, but it was purely a one shot fight. There were no cuts in that fight. Every performer, the actors and the stunt doubles, were in there performing that fight full on. I’d say there was a minimum of 105 beats, and they killed it.

And how many takes did you have to shoot?

I feel like our magic number was take around 7 or 8.

That must have taken some planning.

Well it was tight, because yeah a good amount of planning had to go into it but again, we had such a short amount of time to do that planning. We had maybe a few days to set up that fight. You know, most feature films would get weeks to rehearse something like this. Even the remake of Oldboy probably had at least a couple weeks to plan this. We had literally days. I felt like the New York stunt community stepped up in a big way. To me, it’s going to be a highlight of the show.

How much did you get to work with Vincent D’Onofrio on figuring out how Wilson Fisk would look in a fight?

Quite a bit. He had his own thing, and I shot a previs for him, sort of envisioning how I saw his character play out, and I think we were on the same page. Obviously he brings something amazing to the table when he performs.

How would you compare designing a fight for Wilson Fisk compared to Daredevil?

I feel like they’re almost two sides to the same coin. They’re both doing things for their city. And it’s a tricky thing with their two characters. I think when you get the Fisk character to a certain point, it just becomes pure rage, and all thought process is out the window. His behavior goes into this rage mode, which I’m sure you saw.

The brutality is just relentless with him. When he gets into this mode, he just keeps going until he’s done. And that’s it. He will drive for you. That is the Kingpin, that is D’Onofrio. He’s a very smooth, calculating individual, but when you bring the rage out in him, he’s like a bulldozer. 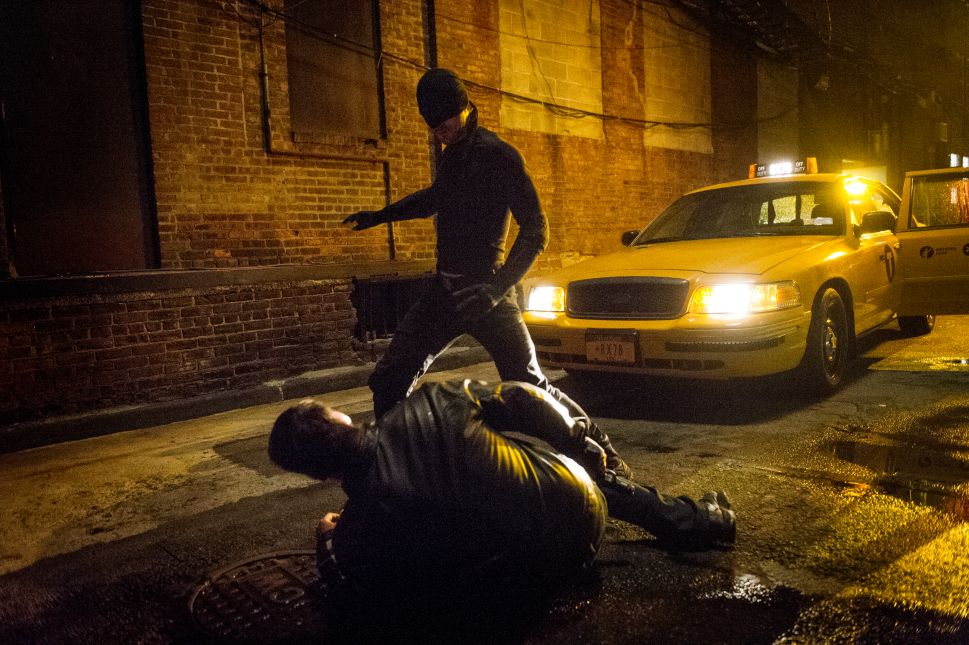