Ms. Mark-Viverito proposed in her State of the City address in February the creation of a “People’s Law Firm”—or “El Bufete del Pueblo”—and co-sponsored legislation with Manhattan Councilman Mark Levine that would create a Civil Justice Office and Civil Justice Coordinator to oversee the existing civil court legal services that the city already finances, and to create a five-year plan for enlarging those services to reach the New Yorkers who need them most.

The proposal to create the new office stops short of a proposal for which Mr. Levine and some others in the Council have advocated: creating a “right to counsel” in civil cases that have an impact on peoples lives, like eviction or foreclosure proceedings, even if someone cannot afford a lawyer—a right that currently exists only for criminal defendants. The proposal instead aims to increase the services available to immigrants facing deportation, parents in danger of losing custody of their children and others in desperate circumstances.

Mr. Banks called the new office “a concept that we support,” but noted the current civil legal services are under his agency’s umbrella, that HRA is already moving to unify the oversight of the present programs and pointed out the language of the bill allows for the new office to be set up inside an existing department that reports to the mayor.

“In view of the consolidation of the city’s legal services programs at HRA and the dramatically increased legal services that the mayor has already allocated to HRA, we greatly appreciate that the legislation provides that such an office may be established by the mayor ‘within any department the head of which is appointed by the mayor,'” Mr. Banks testified to the Council today. “This provision will make it possible for the administration to continue with the new legal services initiatives that are already underway.”

Mr. Banks reiterated his support for the measure speaking to reporters after his testimony, and again emphasized his office is already doing the work that the legislation calls for—combining and economizing a $50 million “patchwork of programs”—and once more hinted that it should be allowed to continue to do so.

“Essentially the legislation’s codifying what the policy choice is that the mayor’s already made. Which is that it makes sense to have these services in one place where they can be managed effectively,” he said. “We are working with the Council toward legislative enactment.”

Ms. Mark-Viverito expressed enthusiasm that the administration had embraced one of her proposals.

“Increasing access to the civil legal system will provide benefits to tens of thousands of New Yorkers, while the city will make sure they have the tools they need to get the justice they deserve,” she said. “We’re very proud of this work, and we’re very proud of what we can achieve in partnership.”

Mr. Levine said he was only too happy to entrust the oversight of the new office to Mr. Banks, and argued that it would “build the infrastructure” for another proposal that has not yet won endorsement from the mayor and the speaker: his bill to guarantee an attorney to every tenant in housing court.

“Steve Banks is just an exceptional figure and uniquely qualified,” he said. “This is definitely not a substitute to our broader goal to give everyone a right to counsel in housing court. This is an incredibly important piece of the foundation that we need to expand our services in this sector.” 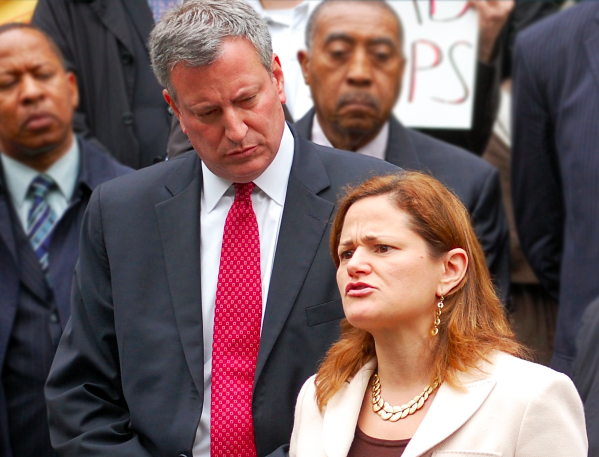