Despite his own move to reduce arrests for marijuana possession, Mayor Bill de Blasio said tonight he does not support Council Speaker Melissa Mark-Viverito’s call to decriminalize other offenses, like fare-beating.

“I think Speaker Mark-Viverito put forward some very heartfelt proposals. I don’t agree with them in the first instance, but they’re certainly going to get an honest discussion from us. I know Commissioner [Bill] Bratton feels the same way,” Mr. de Blasio told Inside City Hall host Errol Louis in an exclusive NY1 interview.

In her State of the City address, Ms. Mark-Viverito proposed expanding the use of desk appearance tickets, or DATs, in lieu of arrests—mirroring Mr. de Blasio’s new policy of issuing DATs for possession of small amounts of marijuana.

“If you are accused of jumping a turnstile or committing other minor offenses in New York City, you may be locked up. And if you can’t afford bail you will spend on average 15 days in jail,” Ms. Mark-Viverito said in her State of the City speech. “The results are predictable: people lose their jobs, or their housing, and cannot take care of their children while they are in custody.”

Mr. de Blasio said that approach made sense for marijuana possession, because “we don’t want to see, in particular young people, saddled with a criminal history for something that was a small mistake.”

But he said fare-beating—jumping the turnstile to deprive the MTA of its $2.75—was different.

“Each one of the offenses has its own character. I could not agree more with Commissioner Bratton on the point about fare evasion. Fare evasion has historically been an offense where a number of the people who were intercepted proved to have a criminal history and, in many cases, a weapon on them or an outstanding warrant,” Mr. de Blasio said.

Fare-beating is a commonly cited example of the success of Mr. Bratton’s broken windows policing philosophy in the early 1990s—as the city cracked down on it, other crimes also fell.

“We, with the NYPD, came to conclusion that we could end arrests for low-level marijuana possession in a way that was consistent with public safety and public order,” Mr. de Blasio said. “I would not say that for example with the approach to fare evasion.”

Turnstile jumping was the only example Ms. Mark-Viverito offered in her speech. But the Daily News recently reported Ms. Mark-Viverito’s office and Councilman Rory Lancman were considering several other crimes they believed might be better handled with civil punishments like tickets—public alcohol consumption, public urination, biking on the sidewalk, being in a park after dark, disobeying a park sign, and littering.

Mr. de Blasio did not address those crimes—nor did he answer Mr. Louis’ question about whether he’d veto a Council move to decriminalize any offenses—but did say he was open to changes in how broken windows is enforced.

“It is supposed to live and grow with the times, which is why we lessened some of the enforcement efforts and clarified them in terms of low-level marijuana possession—still a summonsable offense but not something where we choose to arrest, depending on the circumstances obviously,” he said. “At the same time, we intensified the enforcement levels around the Vision Zero offenses and picked up on some of the new laws, for example, around failure to yield to a pedestrian.” 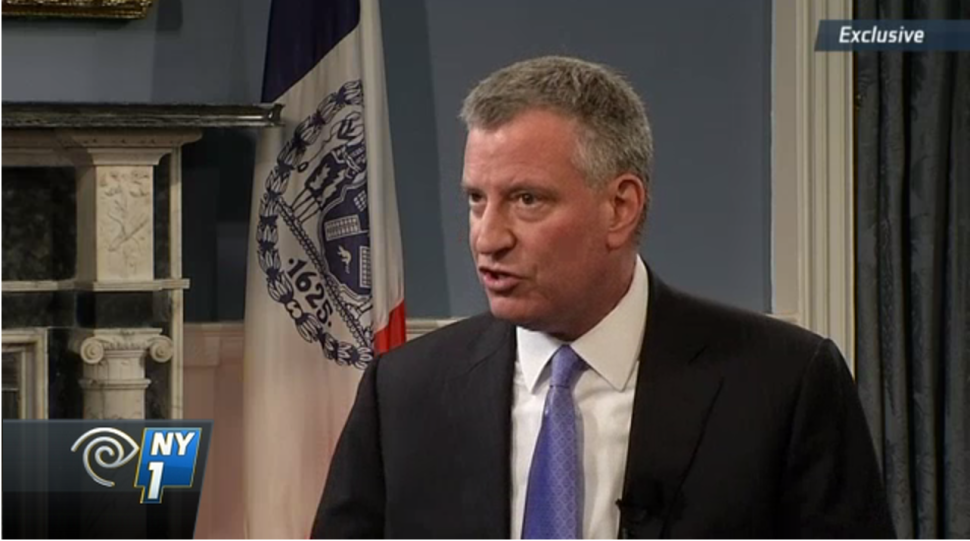