“People of color need not to apply.”

That was the message Public Advocate Letitia James claimed her ally, Mayor Bill de Blasio, was sending to minority and women-owned businesses during his first term in office. Ms. James, a Democrat, joined other left-leaning pols and advocates today in slamming the city for contracting with just 4 percent of M/WBE’s last year—and calling on Mr. de Blasio to appoint a chief diversity officer to fix the paltry number.

“The byline of this press conference should read as follows: people of color need not apply. That should be the story of this press conference,” Ms. James said outside City Hall at an event spearheaded by another de Blasio ally, Bertha Lewis. “What they face are procurement officers in the City of New York who have not changed for generations. We will no longer stand for this. We will no longer stand for institutional discrimination.”

Ms. Lewis, a founder of the Working Families Party and former CEO of the disbanded Acorn, released a 61-page report through her organization, the Black Institute, criticizing the city for not doing enough to contract with MBWE’s, not disclosing enough of the bidding process, and giving insufficient access to start-up capital and legal guidance. Ms. Lewis wants the 4 percent figure boosted to 35 percent and called on Mr. de Blasio to appoint a chief diversity officer.

The state government has such a position and the city does not. Instead, Mr. de Blasio’s counsel, Maya Wiley, oversees the procurement process with Lisette Camilo, director of the Mayor’s Office of Contract Services, and Maria Torres-Springer, the commissioner of Small Business Services.

“I think he needs a second term, so you can print that,” Ms. Lewis said. “However, because you want someone to succeed, there needs to be organized folks out here saying, ‘Hey friend, this is what you need to be focusing on.'”

“We are here today to encourage the mayor, Mayor Bill de Blasio and his team, to recognize that now is the time to make the changes that need to be made to include all of those firms who are here in this town just waiting to participate in the economic bonanza,” Ms. Clarke, a Brooklyn Democrat, said. “I say to everyone, we’ve got a new bird in the City of New York and it’s called a crane—because cranes are everywhere.”

Comptroller Scott Stringer has also previously called attention to the city’s low procurement rate with MWBEs, under both the Bloomberg administration and Mr. de Blasio.

Boosting the number of contracts to over a third, as Ms. Lewis demands, also may not be feasible because the city is mandated by law to choose the lowest bidder or best proposer.

“This administration is committed to increasing City contracts to minority and women-owned business enterprises, and we’ve already seen a 57 percent increase in the past fiscal year — that’s millions of dollars more to our City’s M/WBE businesses,” stated Ishanee Parikh, a spokeswoman for Mr. de Blasio. 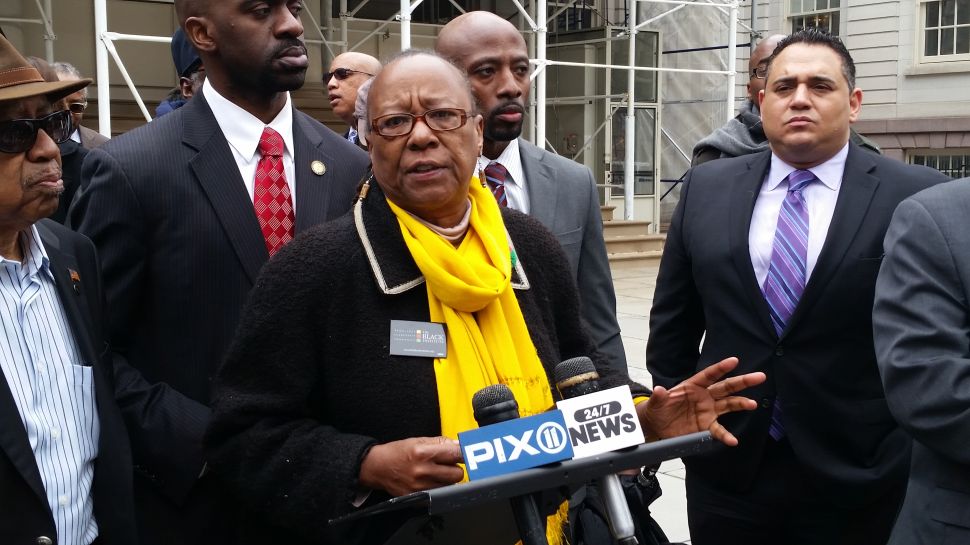