Eugene Chapus, in his 1862 etiquette guide, Manuel de l’homme et de la femme comme il faut, wrote, “A woman in a corset is a lie, a falsehood, a fiction, but for us this fiction is better than the reality.”  This idea of the manipulated body through the centuries is explored in the new costume exhibition at the Bard museum, “Fashioning the Body.”

The curator, Denis Bruna, wanted the exhibition to be a visual and tactile lesson in the way different objects were used to transform the human body. As Mr. Bruna explained to the Observer, “It’s a history of how underwear has modified male and female bodies since the 17th century.” Although many of the pieces worked on the female form, the curator was careful to balance the exhibition with pieces that transformed the male body as well. The aim was to challenge our contemporary understanding of the “caged woman” by showing how men had to manipulate their own bodies to conform to prevailing aesthetic modes, too.

The exhibition was originally shown at the Les Arts Décoratifs in Paris in a  more comprehensive version two years ago. But the Bard has a significantly smaller space—which, in theory, could have been problematic due to the size and shape of the exhibits. However, the curator has created a journey that is both compelling and intimate, using the tiny space and the Bard’s multi-floor townhouse structure to his advantage, organizing the exhibition chronologically—the oldest pieces are on the first floor while the most recent examples of body manipulation can be found on the third floor.

To Mr. Bruna, “the most important thing was to explain more clearly [the ideas behind the exhibition].”  The curator has a doctorate in history from the University of Paris Panthéon-Sorbonne. He is a curator at Les Arts Décoratifs and  teaches fashion history at the École du Louvre. Not surprising, the exhibition was comparable to a visual and interactive university lecture. The emphasis on pedagogy was especially evident in the mechanical replicas of various devices of body manipulation, such as panniers and a cage crinoline,  programmed to move, whether up and down or side to side, to show how the object was worn and used. According to Mr. Bruna, “I wanted to explain the mechanisms of the underwear of this time…all the mechanisms inside the dresses.” Mr. Bruna not only shows how and for what purpose these various undergarments were worn, he also explains the psychology behind them through caricatures and advertisements from their periods, relating to each object.

To further underscore the idea of the living body underneath the undergarments of the past, on the second floor there are a series of mannequins shaped to show the ideal body types of the last one hundred and fifty years. Here, the curator wanted the viewer to not only see ideal beauty throughout the centuries, but to also touch and feel the differences.  “It’s very important because you can see that the natural body doesn’t exist.” Said Mr. Bruna. “We have a cultural body [each time the fashion changes]  and each time, the body tries to catch the fashion of the time. Whether it’s the fashion to have a [flat] chest or a very [small] waist and very [large] chest.”

The underlying message of this exhibition is that there has never been a moment in fashion history where men or women were freed from societal ideals of beauty. Even in the freewheeling 1920s, when young Flappers manipulated their bodies to create the impression of  boyish figures, they still needed firm undergarments to achieve the effect.

The corset, a notorious fashion undergarment, is framed within the narrative of subservience and bondage (during the times when women had to wear corsets) versus freedom and power (the modern, non-corset wearing woman). But the vitrine displaying corsets for babies, boys and girls contradicts this narrative. It was once considered a garment of health to support the body as it grew. And although boys stopped wearing the corset at the age of seven, that did not mean they were free from body manipulation. Men’s fashion was defined by ideals of masculine beauty and virility down through the centuries. From padded chests and genitalia, to tight breeches emphasizing an elegantly shaped leg, men were not immune to the societal constructs of the ideal beauty.

This exhibition not only charts changing fashions and forms over the years, it illustrates how important it was to humanity to exert control over the body shape given at birth. In a world where plastic surgery is used to manipulate the modern face and body, it is useful to travel back and experience the historical context of such manipulation.

Fashioning the Body Exhibition: Through July 26, 2015 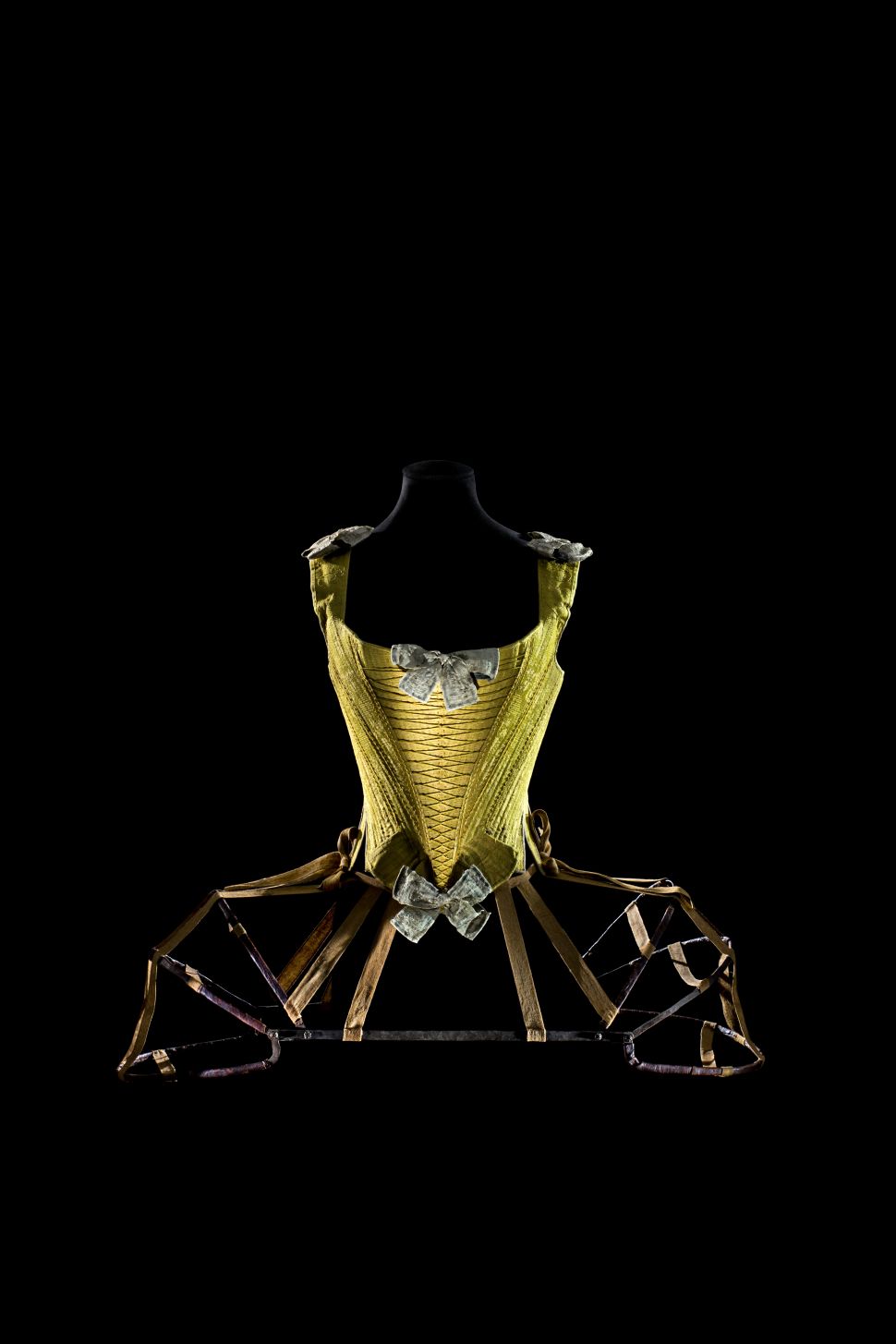