“Sustainability is an opportunity. It creates long-term value for stakeholders and it is optimistic, not constricting,” said François-Henri Pinault during his opening statement at an enlightening talk at the Parsons The New School for Design on April 2.

Mr. Pinault was joined on stage by toxicologist Linda Greer, director of NRDC’s health program and Timo Rissanen, assistant professor of fashion design and sustainability at Parsons. Moderated by Simon Collins, creative advisor and member of Parsons board of governors, the three gathered to discuss sustainability and fashion for an audience of students, industry and media.

A glance at the latest ads from Kering staple Gucci inspires a million thoughts and it shames me to confess, the last of them is, “Hm, what is the sustainability situation vis-à-vis the tan Gucci platforms I will scramble over hot coals to buy?”

The surprising answer is: sustainability is at the core of the Kering group. From the 1,500 different fabrics produced by their Material Innovation Lab, which designers including Alexander Wang and Joseph Altuzarra select from each season, to the officers within each individual brand charged with managing the sustainability programs, the company revolves around the theme. This is never trumpeted and in fact, Mr. Pinault highlighted the eco-friendly philosophy of Kering stalwart Stella McCartney, as a blueprint for the company. “She was raised in this way, it is just who she is,” he said. He shared his hopes that in a similar way, Kering’s sustainability footprint will eventually speak for itself.

The panel also discussed how sustainability’s reach stretches way beyond small or capsule collections of organic fabrics and one-offs at select stores. Companies with consciences are seriously investing in the science of reprocessing and reducing. “I am so tired of organic cotton T-shirts,” said Mr. Rissanen. “The business is now about so much more, the world does not need another organic T-shirt!”

Among the biggest concerns about the fashion industry has been the amount of and chemicals used in Asian fabric production mills. “But this is changing,” said Ms. Greer. “It is up to companies to investigate their manufacturing chains, transparency is now key.”

Transparency is the catalyst Ms. Greer hopes will drive consumers to choose retailers who can demonstrate eco-credentials over those who cannot. Ms. Greer pointed out that companies including Target, Gap and Levi’s have made giant leaps by altering their production chains in China to work with textile mills using drastically reduced amounts of and chemicals. Sustainability was sold to these profit-first manufacturers as an opportunity to “tighten up the ship” in Ms. Greer’s words, to produce less waste, and the idea thankfully caught hold.

Ms. Greer added that tanning leather for luxury shoes and bags has been among the worst industrial, environmental offenders. “It came to the fore as a big source of chemical pollution and a huge user of .” Here, Mr. Pinault spoke up about Gucci in particular. The ultimate Italian luxury brand is now working, he said, with pioneering processes to drastically reduce the impact of tanning. Mr. Pinault added that the science of changing this process is ongoing within his company.

Since 2005, Mr. Pinault told the audience, “I have met with every designer (in the Kering group) and ensured that sustainability is at the heart of their brands.” There are socio-political goals at work alongside environmental concerns, too. “Seventy-five to 80 percent of our customers are women. We support the fight against violence against women,” he added, saying enhancement and empowerment of women globally is also a key goal for Kering, which supports a number of organizations and initiatives working in this field.

The panel discussed issues facing mass producers of cheaper clothes, too. H&M, for instance, has developed a fabric reprocessing method which Kering is looking at closely. However, one thing remained clear at the end of the talk. There is still a very long way to go. “People still need to be convinced, if we want to move forward we must share the dream. Richard Branson first convinced me that companies such as ours must set an example and inspire others,” said Mr. Pinault. Ms. Greer added that there are still huge chunks of the fashion industry not exploring sustainability enough.

As the talk closed, Mr.Pinault summed up everyone’s thoughts: “Our generation’s responsibility is to ensure that the next generation will do it differently.” 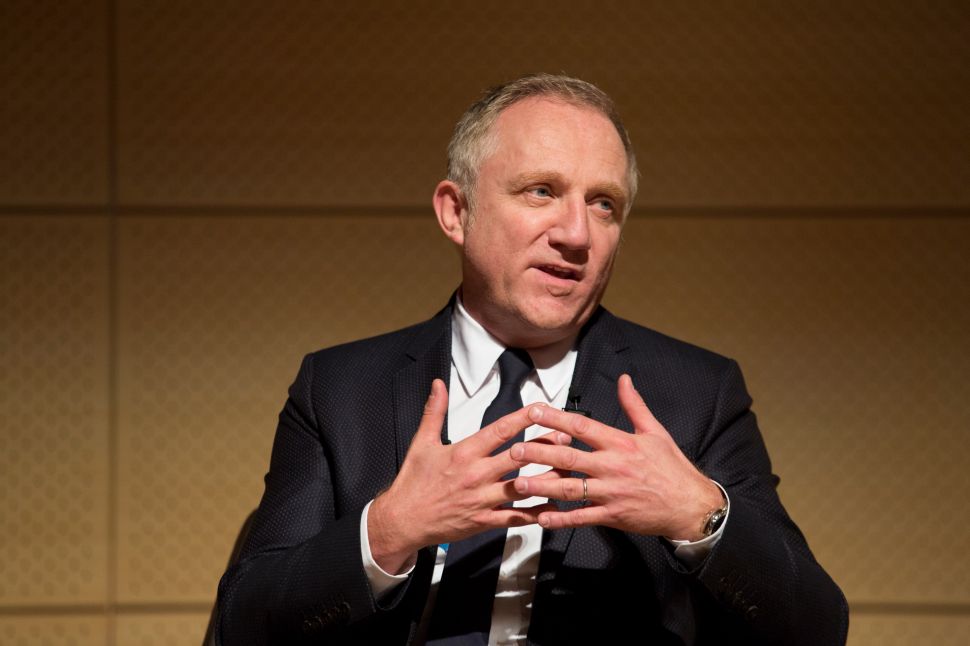