Last week, an Observer exclusive revealed troubling questions swirling around the planned sale of the venerable Home of Sages synagogue on Bialystoker Place on the Lower East Side. Despite several bright red flags—a plan to send $10 million of the $13 million sale price to an unrelated synagogue overseas, an agreement to rent space that the shul president signed with his own wife, several large donations made to Jewish groups at a time that the congregation was so desperate for cash that it was selling its building, plus the fact that congregants and the rabbi of the shul had no idea who anyone on the board was—the sale seemed to be on the fast track.

The Attorney General’s office, responsible for charitable organizations, had declined to stop the sale. On Wednesday, April 8, State Supreme Court Judge Arthur Engoron had denied a request for an adjournment. “We will see you on April 15, 2015 at 10:30 am” a note from Judge Engoron’s clerk read, an ominous sign according to David Jaroslawicz, the lawyer representing congregants trying to stop the sale, who said such requests are granted routinely.

This morning, Judge Engoron suddenly recused himself, offering no explanation. The case, which had been rocketing toward a conclusion that would have put $13 million into the hands of shul President Samuel Aschkenazi and delivered a coveted piece of property to the developer Peter Fine, is now on hold.

Today, the Observer can confirm that the US Attorney’s Office of the Southern District of New York is now looking into the case. Having read the Observer’s story, which was picked up in Curbed, The Real Deal, TheLoDownNY, and elsewhere, witnesses are now being interviewed. The Observer has also heard, but has not been able to confirm, that the Attorney General’s office, which has been very tough on abuses by nonprofits, is taking a second look. (A spokesman for Attorney General Eric Schneiderman declined to comment on this case.)

The Observer is now able to shed additional light on one puzzling aspect—just how this piece of property attracted the attention of Peter Fine in the first place. According to Mr. Fine’s spokesman, Mike McKeon, “Peter has been involved in the community his entire life, with family connections that go back to his childhood. He first become involved in development opportunities in the community in 2007, when he was interested in the Henry Street Settlement House project, which didn’t move forward at that time in light of the financial meltdown in 2008. In 2008, he had his first conversation about the Home of Sages project with Mendel Aschkenazi. He was introduced to Mendel by Heshy Jacob back in 2008.”

Mendel Aschkenazi, who was arrested and sued by the Attorney General in an unrelated nursing home fraud last year, died shortly thereafter. He was the son of Samuel Aschkenazi. According to the New York Post story that ran the day after last week’s Observer story, both Samuel and Mendel Aschkenazi were drawing salaries from charity moneys the Home of Sages collected—charity that amounted to “$700,000 to $800,000 a year to take care of elderly rabbis.”

The introduction of Harold “Heshy” Jacob into the mix is interesting, as well. Mr. Jacob has for years been characterized as the third musketeer of the Lower East Side, with the first two being Willie Rapfogel, who is already in prison, and Sheldon Silver, the former Speaker of the Assembly who is under indictment.

Until the Attorney General and US Attorney disrupted their trio, Mssrs. Rapfogel, Silver and Jacob ran the Lower East Side with a hegemony that is difficult for outsiders to appreciate. With unquestioned political power—Mr. Silver was universally considered the second most powerful man in the state after whoever was governor—the three of them also ruled over much domestic life. Mr. Jacob’s juice derived from the fact that he was the general manager of the 2700 units of housing that comprise East River Housing Cooperation, Hillman Houses and Amalgamated Housing. (Worth noting: the fellow who ran them before Mr. Jacob was Ralph Lippman, the father of Judge Jonathan Lippman, the Chief Judge of the New York Court of Appeals).

According to one Jewish activist with long connection to the neighborhood, “Basically, if you were a Jew living in the Lower East Side, Heshy Jacob literally controlled your fate. He could get you an apartment and he could throw you out, he could get your elderly relative a place near you or he could make things difficult. Plus he was Shelly’s best friend. He’s also the president of Hatzolah [the EMT crew comprised entirely of Orthodox Jewish volunteers] and on the Board of the United Jewish Counsel on the Lower East Side, and on the board of Bialystoker synagogue.” [The Bialystoker, where Mr. Silver worships, is right next to Home of Sages.]

Mr. Jacob, who is generally regarded as an effective manager of the 2700 units over which he presides, is a much-feared—and loved—presence in the neighborhood in which he was born and raised. Several people the Observer spoke to for this story expressed both admiration for Mr. Jacob’s years of service to the neighborhood and concern that he had the ability and inclination to retaliate if provoked. Mr. Jacob himself has been clear about the power the trio wielded. He told the Forward in 2013, “We put in time and effort for the people. It’s not that we simply are despots.”

Mr. Jacob was equally straightforward in a brief interview today with the Observer.

One interesting aspect of this strange saga revolves around two cars that park by the Home of Sages every day. A search eventually revealed that the cars—a black Lincoln Towncar and a banged up white Toyota Rav4—belong to Heshy Jacob and his son. When the Observer called to ask Mr. Jacob about having made the introduction to Peter Fine, he emphatically declined to comment. “I have no comment to make because I have nothing to do with the entire issue. I’m not interested in getting a chance. I’m not part of the issue, I have nothing to do with it.” But Mr. Jacob was decidedly more loquacious when it came to the subject of the cars, denying that the thin strip of pavement is owned by Home of Sages.

Property records are confusing on this point – they are not granular enough to show an area as small as two parking spaces. But a lawyer involved in the affair who declined to be named told the Observer, “Even if the parking spaces don’t [belong to Home of Sages] and we believe they do, they certainly do not belong to Heshy and his son. That begs the questions: what is he doing there, is he paying for the spots, to whom and for how long? Nice perk living in Manhattan with your own private parking lot.”

Interestingly, both cars are registered as emergency vehicles. That means that under the terms of the Vehicle and Traffic Law, they can park pretty much wherever they want. Why even use the tight private spot to park?

Another puzzling aspect of this case may also have recently been solved. Why did the synagogue go through all these machinations to move to Queens and lease the property in Kew Gardens that is owned by synagogue president Samuel Aschkenazi? Why expose the transaction to the scrutiny when it’s obvious that no synagogue that serves elderly orthodox can continue to serve its Shabbos-observant congregants when Google Maps says it’s a 3-hour walk? Even the $48,000 a year the synagogue Mr. Aschkenazi is trying to pay Mrs. Aschkenazi using her first and middle name as the fugazi landlord doesn’t seem worth it – it’d just be easier to sell the place, take the $13 million and disband the congregation, as has happened to countless LES synagogues as the neighborhood demographics changed.

According to the lawyer with knowledge of the case, the Articles of Corporation of the Home of the Sages state that if the Home of the Sages is dissolved, then the assets can only go to another not-for-profit. That would mean Peter Fine could not buy it. Apparently, the lawyer for the Board, Patrick Rohan at Boies Schiller, figured out that if the congregation says it’s moving rather than dissolved, they’re not technically closing it, even if none of the congregants makes the 3-hour walk.

After the mystery recusal of Judge Engoron —strange, considering he had already issued rulings, so he must not have felt all that conflicted when the case began—the case will be rescheduled before the new judge, Geoffrey D Wright. Right now it’s looking like Thursday at 2:15 pm.

Until then, expect the temperature to stay pretty heated. One interested party showed up at Home of Sages last night to daven ma’ariv. According to a source, two huge security guards walked up to him and said, “You are not allowed here…” As the worshipper began to protest, the guards showed him the door. He asked, “Who are you working for?” They replied, “None of your business; now get out.”

One last peculiar thing occurred. On the wall of Home of Sages, just like every wall of every church, mosque and synagogue in the world, there’s one of those bulletin boards with black felt rows and moveable white letters. The one at HOS has been there as long as anyone can remember. The Observer has a picture of it taken last Tuesday by some guy in a suit and tie (we don’t know who took it). The board lists Mendel Aschkenazi, who died last year, and Rabbi Singer, a beloved leader who died more than a decade ago. Last night, the bulletin board was gone. 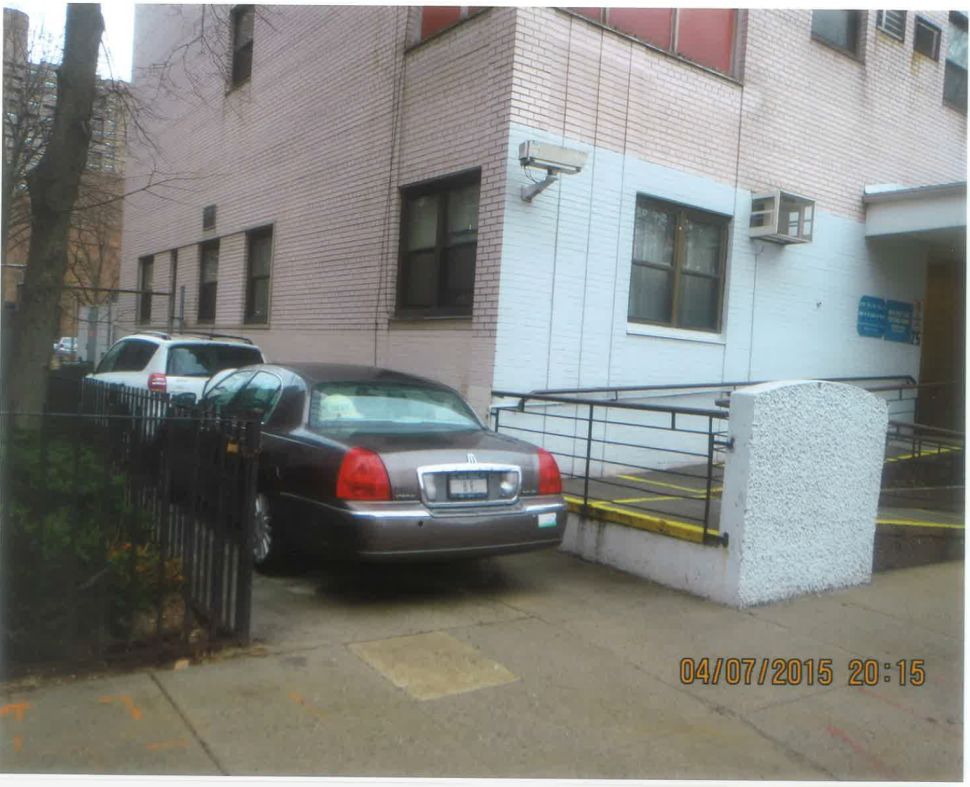