Vinnie: So far, the training to become a super stealthy, deadly face changing assassin in the House of Black and White includes 1) sweeping. so much sweeping 2) getting whacked with a stick. Under those terms I’m pretty sure every orphan from Annie is qualified to be a Faceless Man.

Drew: Gotta learn to sweep before you learn to crawl to a quiet corner of the room to die.

Vinnie: Maisie Williams is a national treasure, though, so I can accept a few scenes of keeping the area around the poison pool tidy.

Drew: “Poison pool” is so my next  Netflix hyper-specific category.

Vinnie: I love Tommen as the sort of anti-Joffrey King of Being a Teenager. The kid just found out what sex is and his mind is blown. “You can just go back to Casterly Rock, mom, I’ve got life all figured out. I’m like 15 now.” I can’t wait for the first time he asks for the keys to the Lannister Prius.

Drew: Why yes, that IS a 1998 Passat in my family’s Delaware coat of arms. Thank you for noticing, Vinnie. You’ll notice the motto on the crest is high Valyrian for #MotherofHashtags. But we weren’t talking about my thing, were we?

You know you are getting old when Lancel and Tommen suddenly look like 1/2 a hot boy band. I hope they eventually find Rickon and he’s a beautiful fairy boy who founded the Westeros version of Coachella.

Vinnie: Speaking of Mom: what was it that Cersei said to Margaery last season? “If you ever call me sister again I’ll have you strangled in your sleep.” That was for sister! Look at that face when she called her mother. 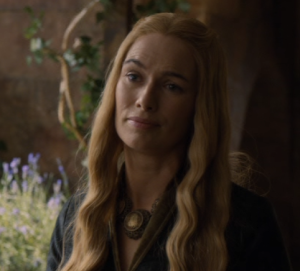 Oh man. Petition to change the house sigil of the Lannisters from a lion to a slowly boiling rage face.

Drew: One time I was staying at a college boyfriend’s house and I was sitting on his lap when the room bursts open with a loud bang. His mom is home early. Before I can introduce myself, she’s like “Feel free to move, There are enough chairs for everybody to sit on a different one.”

She was like a pre-Cersei Cersei. Whenever I would come up for a weekend she’d be showing me that same exact expression. I loved watching her face around Margery. If we were in a different fiction mashup, I bet Cersei would be throwing around some heavy Avada kedavra curses..

Vinnie: Oh, and “I wish we had some wine for you. it’s a bit early in the day for us.” I could barely see what was going on in this scene because of ALL THE SHADE.

Drew: Margaery is kind of a Mean Girl, though. She’s the Regina to Sansa’s Kady. She better checks herself before she wrecks herself. And btw, I bet she actually does really like Tommen. We knew she was playing Joffrey, to keep him under her thumb, but I don’t imagine it was very enjoyable for her. She’s got a huge roster but I want to believe no one is as sweet and gentle King Tiger Beat. (Lion Beat?)

Vinnie: Sansa sure has found herself in a nest of vipers, huh? No, no vipers. Those are the other people in the desert. A nest of, uh, skinless people. What do we think of this new, book-diverting development?

Drew: Oh they’re mining the Jeanne Poole thing and making it an emotional beat for Sansa and Theon; a ‘ship that would never left the harbor. Ramsay Bolton is the hottest because he’s Simon from Misfits! (Please watch Misfits, the show where all juvenile delinquents gain terribly shitty powers.)

It’s actually such a dick move on Littlefinger’s part to marry the daughter of the woman he loved to the formerly bastard son of the man who killed her. The reason to keep Theon alive during the wedding is so he can confirm it is a Stark girl. (Which, AS SOMEONE WHO HAS READ THE BOOKS, it isn’t.)

Vinnie: You know what I love about the Night’s Watch? The fact that their oath is so vague people are always quoting it in completely contradictory situations. How often do you think this exact exchange has happened at the Wall?

Ranger 1: I’m so conflicted, I can’t leave the Wall but [insert home town] is in danger!

Ranger 2: Well, as the oath says, you are “the shield that guards the realms of men.”

Ranger 1: Are you telling me it’s better to leave or stay?

Drew: Yeah, well it had to be. It’s a FRATERNITY of brothers, and like any frat they need a vague charter and a lot of plausible deniability when the boys  in Black visit Mole’s Town.

Vinnie: You know what’s not vague? Jon’s swift and brutal sword of justice. Dude straight lopped off Janos’ head for his sass.

Drew:  God can you imagine his snot-bubbles if he ever saw the ghost Ned Stark after this whole Janos thing? Very much “I LEARNED IT FROM YOU, DAD!” and then trying to break Longclaw over his knee.

Vinnie: Sidenote: how funny was it when there was this big build up to who was going to take charge of the Night’s Watch new latrine, and it just ended up going to some dude named Brian. Classic fucking Brian. He didn’t even look upset about it.

Drew: This whole thing reeks of a Python bit.

Vinnie: I’m so, so glad they skipped right to Tyrion getting captured by Jorah in the brothel because IDK if you remember this from the books, but the show is cutting out approximately 4,000 pages of Tyrion throwing himself Westeros’ biggest pity party.

Drew: Yeah, he gets really unlikable when he gets all mad sketchy to the little actress in his gladiator traveling theater troupe. Or do you think they still plan on bringing her back?

But this is the Team-Up to end all Team-Ups: Sir FriendZoned and the alcoholic royal dwarf who has straight MURDERED people recently.  Do you think it’ll be better than Bronn and Tyrion, season 1?

Vinnie: Unfortunately, not many things in this world can top Bronn and Tyrion’s bro-love from season 1, and that includes many of my real life friendships.

The one thing that bothered me is how did that whorehouse have such an accurate Daenerys costume?

Drew: Easy. The brothel all pitched in and hired the guys from Silicon Valley to steal Sean Parker’s wife’s wedding dress. 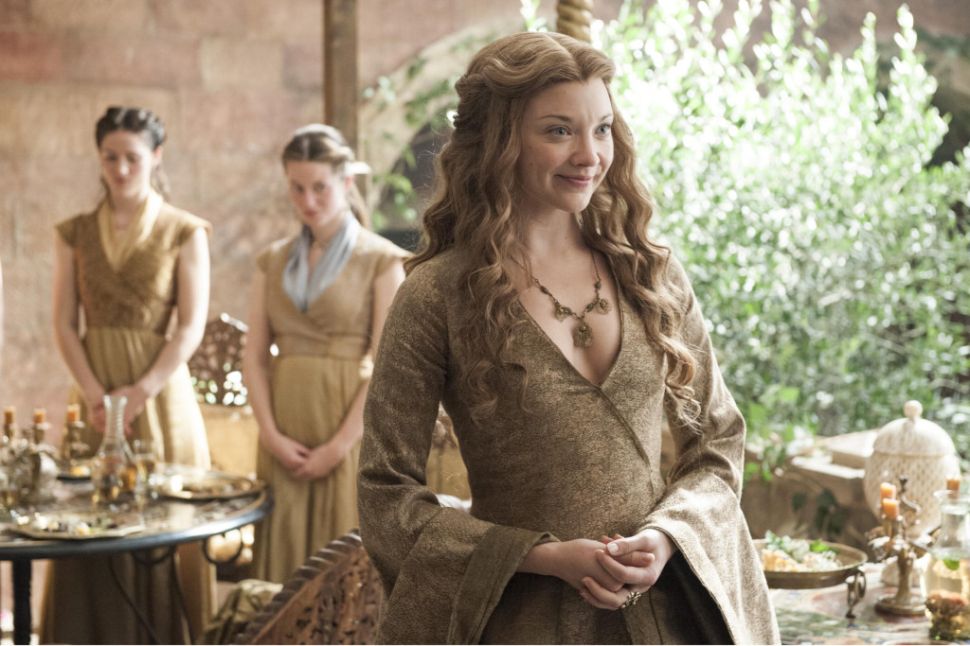