On a recent Saturday morning, a slew of young, eager children practically burst into Joan of Arc Middle School on the Upper West Side, laughing and excited as if they were attending a birthday party.

What they’re so excited for does not include cake and a pinata, but math.

The Top Honors tutoring program is unique for a variety of reasons, the most obvious being that children, who mainly hail from public middle schools in the Bronx and Harlem, actually enjoy it. A second being that it is completely free, made largely possible by a grant donated by Columbia University. The third reason? No homework allowed.

This means students are encouraged to learn at their own pace and are not focused on dreaded tests. However, students will have to take assessments to gauge their improvement, according to Julia Kang, executive director of Top Honors, and one of the only two staff members in the program. Everyone else is there on a voluntary basis. The program receives about 250 applications each year, but can only accommodate 125 students. Ms. Kang and Ben Block, Top Honors’ board chair, said they hope to expand the program in the near-future. A first priority is to find a second location, which would accommodate students from other areas of New York City.

“Something that we found resonates with the kids is they love money problems,” explained tutor Josh Bienstock. “Say you have the number positive four, we can explain to the kids, that means you have four dollars. Like the number negative eight means you owe someone eight dollars. And somehow that really helps them visualize the numbers and understand how these positive and negative numbers go together.”

He said teaching at Top Honors is based on encouragement and reinforcement. When a student shows good behavior or attendance, he or she can win “THinc$ dollars” which can accumulate to a prize, including Kindle Fires, which are given away at a graduation ceremony. Students receive a “THinc$ dollar” when their tutor arrives on time,” so if a tutor comes late … they give their tutor a bit of a hard time,” said Bienstock with a laugh.

Bienstock also serves as the coordinator for the parent program, where students’ parents can study the same math curriculum as their children.

Tyra Mitchner, who is enrolled in the parent program, said she feels more confident in her ability to assist her daughter Mayali, who is in sixth grade, after going through tutoring herself. “It helped me with some of the things I sort of forgot,” she said. “Right now I’m on probability and I took the assessment. I got six out of eight so I did pretty good,” she happily announced.

Seventh-grader Erica, who excitedly played a guessing game, proudly announced she has improved her math grades in school from a D to a B after less than a year in the program.

“I had all As in everything last semester except for math,” she said.

Adam Breitman, a tutor and who is also in charge of coordinating the games (which run first before the individual sessions begin and can be anything from Sudoku to a toned-downed version of craps) praises the program for turning math from a chore into a pleasure. “It’s kind of a way to sneak math into a fun activity. Sometimes [students] don’t realize they’re doing math … kind of like when you sneak a vegetable into a dish and you don’t realize you’re eating vegetables but it’s healthy.” 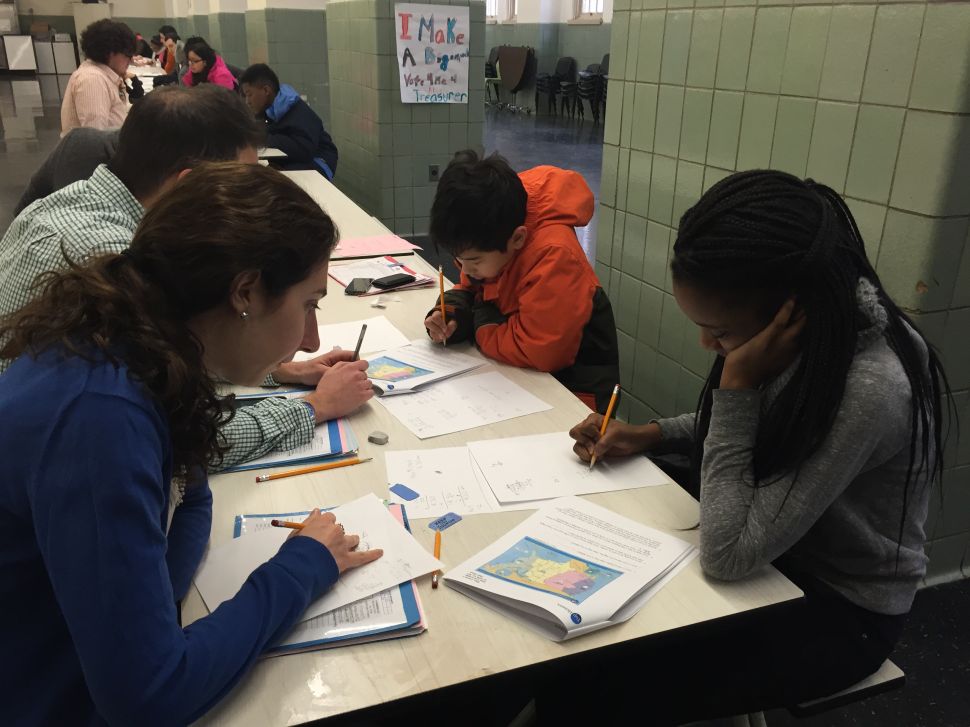