Woman in Gold is an extraordinary true story turned into an exemplary motion picture about one brave German Jew who bites the bullet and fights overwhelming odds to cut through the red tape in the Austrian government and reclaim the art treasures stolen from her family 60 years earlier by the Nazis. It’s a touching film that entertains with warmth and humor while teaching us something about history, law and justice with enormous heart, subtlety and compassion, brilliantly acted and skillfully written. Is there anything Helen Mirren cannot do?

Whatever else you feel about her, there’s no doubting her versatility. Simultaneously, she’s on Broadway, playing the Queen of England in the smash hit play The Audience, and now on the big screen as Jewish Holocaust survivor Maria Altmann. Don’t debate which one to see first. Just make sure you see them both.

Woman in Gold, impeccably directed by Simon Curtis, begins in Los Angeles in 1998. Mrs. Altmann, the widowed proprietor of a small dress shop, was lucky enough to escape to America in the nick of time; hoping the rest of her family would follow. It was not to be. They all died unspeakable deaths at the hands of Hitler, after the Reich confiscated her affluent family’s possessions, including their elegant apartment in Vienna and a lifelong collection of valuable paintings, especially five Gustav Klimts that hang in Vienna’s renowned cultural pantheon, the Belvedere Gallery museum, including the world-famous Portrait of Adele Bloch-Bauer that Klimt painted of her favorite aunt, valued at $10 million, and now called simply Woman in Gold.

When her last surviving sister dies, she finds letters linked to the Nazi theft, and hires a young lawyer to seek art restitution (a recurring legal tangle that currently involves millions of claims, and a subject investigated impressively in the George Clooney film The Monuments Men). The initial personality clash between the elderly, strong-willed woman and the clean-cut but inexperienced preppie lawyer Randy Schoenberg (an awesomely adept and relentlessly convincing Ryan Reynolds, in a performance that will amaze you) with a wife and family whose grandfather was Austrian composer Arnold Schoenberg, gradually eases once Randy begins his research, revealing a real-life story of greed and terror more suspenseful than any fiction.

Cutting from Mrs. Altmann’s predicament, exacerbated by unyielding opposition from the Austrian government, to scenes that unfolded during the Nazi occupation of Vienna, the film brings vibrantly to life a heritage worth defending and a wrong even the young lawyer believes is worth setting right. Her first trip in half a century to Vienna, a city she vowed never to visit again, where the savage events tore her family apart, ends in defeat. With the aid of an Austrian journalist (Daniel Brühl), she is able to cut through some of the bureaucratic red tape, open her sister’s will, and open her case for review by the government authorities. Viewing the treasured Klimt canvas in the museum, intercut with the Jewish persecutions, her family’s arrest, and their lost treasures—tracing jewels, artworks and a priceless Stradivarius cello to Hitler’s private resort in the Alps—Mrs. Altmann comes face to face with many contemporary points of view, from Austrians who want to leave the past alone, and those who are still tortured by it.

Back in California, Maria throws in the towel, but now it’s Randy who refuses to give up or give in. Searching for the legal loophole that will allow them to sue the Austrian government at home in the U.S., he loses his job, neglects his wife and new baby, and needs money badly. But something within him based on what he learns about his own family’s involvement in the war drives him to regard the art works stolen by the Nazis as the war’s last prisoners. Ignoring all attempts to dump Randy for powerful legal forces with deep pockets, she and her idealistic attorney make it all the way to the U. S. Supreme Court and the outcome will leave you cheering. (A sense of pride for Mrs. Altmann’s invincible spirit also put a few tears in my eyes.) Helen Mirren is a miraculous blend of grit, grillades and grace in a performance of class and wit and unforgettable naturalism, and Ryan Reynolds, who is fast becoming one of the screen’s most reliable presences, matches her every step of the way.

The events are well documented, so there is no such thing as a spoiler here, but I think you still deserve the thrill of seeing what happens for yourself. I will simply say that in addition to a fine film, if you want to see the actual Woman in Gold, it’s on view in the elegant Neue Galerie in New York City from April 2 to September 7. 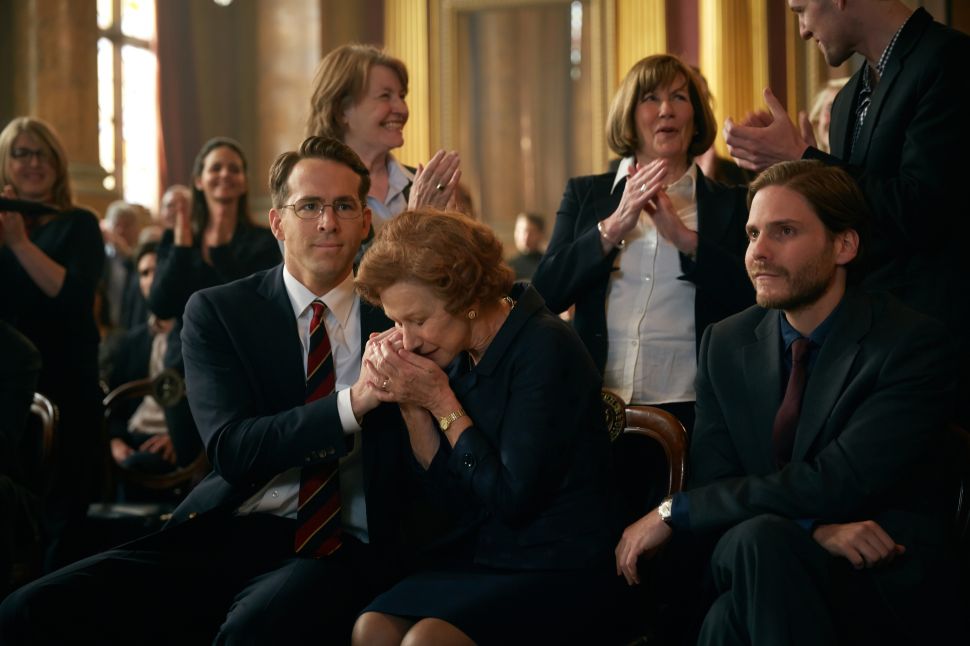