Gov. Andrew Cuomo unveiled a blueprint today that will seek to dramatically reduce the number of AIDS cases in New York State by 2020.

Mr. Cuomo, speaking on a closed off street outside Greenwich Village’s LGBT Center, said the plan–which contains 30 recommendations and 7 new recommendations for how the state can go beyond the mandate of ending the AIDS epidemic–would make AIDS a disease of the past like tuberculosis and measles.

He also promised that his fight to reduce the number of new HIV infections in New York State from their current level of around 3,000 per year to 750 in five years will coax other states to do the same. With 750 cases a year, AIDS would no longer officially be an epidemic.

“This is going to resonate all across the nation,” he said. “They’re going to put that microphone in the face of congressmen and senators and presidents and governors and say, ‘Will you end the AIDS epidemic in your state the way New York is ending it?”

Last year, Mr. Cuomo empaneled a 63-member task force to come up with recommendations for lowering the number of new infections to a point where AIDS will no longer be considered an epidemic. Charlie King, the CEO of Housing Works, a group that helps people living with HIV/AIDS, co-haired the task force and introduced Mr. Cuomo.

Mr. Cuomo allocated $10 million in this year’s budget to fight AIDS. The plan, among many recommendations, will expand HIV testing, clean syringe access and sexual education requirements. It also calls for the ability for minors to consent to the HPV vaccine, decriminalizing syringe possession and a statewide ban on the ability of law enforcement to use a person having condoms on them as evidence of prostitution.

The blueprint also calls for the expansion of Pre-Exposure Prophylaxis (PrEP) for people who are at higher risk of contracting HIV, including to minors.

At least some of these measures will require legislative action, but Mr. Cuomo predicted political momentum would be behind him, like when he fought to legalize same-sex marriage in New York. He invoked his father, former Gov. Mario Cuomo, who created a state AIDS advisory council in the early 1980s.

“He was the first to say a state should open its arms and welcome in all of its citizens and work with them to get through this crisis,” Mr. Cuomo said. “That changed the tone of the debate in this nation and I’m proud of that today.”

Mr. King said the blueprint would help to end the stigma against people living with HIV/AIDS.

“We are tremendously gratified by the actions you’ve taken,” Mr. King said to Mr. Cuomo. 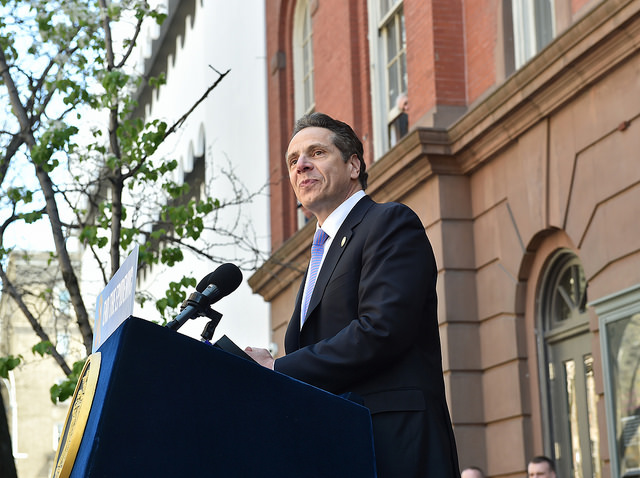