Can thinking about death make us more generous charitable givers? Studies seem to suggest it does. One found that just standing near a funeral home increased people’s philanthropic intentions. And, remember Ebenezer Scrooge? After his encounter with a ghost—who points a bony finger at a tomb on which his name is engraved—Dickens’ famous miser becomes the soul of generosity.

Of course, philanthropy that’s prompted by thoughts of death is often about tax avoidance. And given the higher estate tax recently proposed by President Obama, some may turn to charitable bequests as a way to reduce their posthumous liabilities. But, as studies show, giving is motivated by something far more powerful than the desire to lower our tax bills.

Death scares us. While we push it from our thoughts, it lurks beneath the surface of our consciousness. We can deny its existence. But unfortunately, as the Onion once reported, “despite the enormous efforts of doctors, rescue workers, and other medical professionals worldwide, the global death rate remains constant at 100 percent.”

Yet we humans are practical animals. When confronted with the terrifying vision of our own expiration date, we get to work. We create meaning in our lives by reinforcing our cultural values, erecting buildings, making art, teaching—and writing charitable checks.

There’s even a hypothesis for this. With the alarming name Terror Management Theory, it’s the brainchild of academics Jeff Greenberg, Sheldon Solomon and Tom Pyszczynski, who’ve been investigating it for over 25 years.

The idea—set out in their forthcoming book, The Worm at the Core: On the Role of Death in Life—is that knowledge of our own death (“mortality salience,” as it’s known) is a powerful force shaping our actions, behaviors and beliefs.

In 2002, the team decided to see if this applied to philanthropy. “We started doing studies looking at how reminders of death influenced giving,” says Mr. Pyszczynski.

To do so, they interviewed some people next to a funeral home and others several blocks away. When asked about charities they considered important, those near the funeral home spoke more favorably toward these organizations than the others.

For Mr. Pyszczynski, this reflects the principles of Terror Management Theory. “The theory predicts that thinking about death will lead people to do things to live up to their cultural values,” he says. “And giving and being kind and generous is something that’s valued.”

Death also prompts philanthropy, as giving is a way of living on after death. Money can, it seems, extend the human spirit’s reach that little bit further. We take comfort from the fact that, after we’re gone, we can still help cure cancer or build schools for underprivileged children.

“Symbolic immortality,” as the concept is known, is not a new idea. Urban legend has it, for example, that Merton College, Oxford became known for its superb cuisine because, hundreds of years ago, a generous benefactor left the English college an endowment specifically for feeding its students in perpetuity.

But it’s not all about improving lives. Brain scans reveal that, by making bequests, people are also creating a story about themselves.

A study of charitable decisions that used functional MRI technology (which measures brain activity by detecting changes in blood flow) found that bequest decisions prompted higher activation in the precuneus and lingual gyrus of the brain than thoughts about regular giving and volunteering.

The precuneus (often known as “the mind’s eye”) and lingual gyrus relate to self-reflection, thoughts of the recent death of a loved one, and life memories. “Neuroimaging shows that when people think about this, they are engaging in an autobiographical review,” says Russell James of Texas Tech University, who conducted the study with his colleague Michael O’Boyle.

What the study reveals, the academics wrote, is that “the core decision of selecting recipients [for a bequest] appears to be one of visual imagery.” The findings, they add, suggest that “the bequest decision may be analogous to creating the final chapter in one’s personal autobiography.”

This also emerges in the decisions people make when drafting a will, says Jen Shang, professor of marketing at the U.K.’s Plymouth Business School.

“When we interview people who consider giving to universities, they reflect on their own experience of college and the difference it made to their life,” she says. “That’s how gifts in people’s wills help them cope with their own death.”

For some, of course, discussing what happens to their money after they die is not easy. This means approaching the topic gingerly, says Claire Costello, national philanthropic practice executive for US Trust, Bank of America’s private wealth management division. “But many are up for a more casual discussion, which is ‘So what’s it all for?’ ”

Charities might take note. That’s not to say showing potential donors a tombstone on which their name is engraved would be sensible or feasible. But gentle reminders of mortality and how charitable giving might help people make sense of their lives—and their deaths—could, it seems, prove a fruitful fundraising strategy.

Sarah Murray is a Financial Times contributor and author of Making an Exit: From the Magnificent to the Macabre, How We Dignify the Dead. 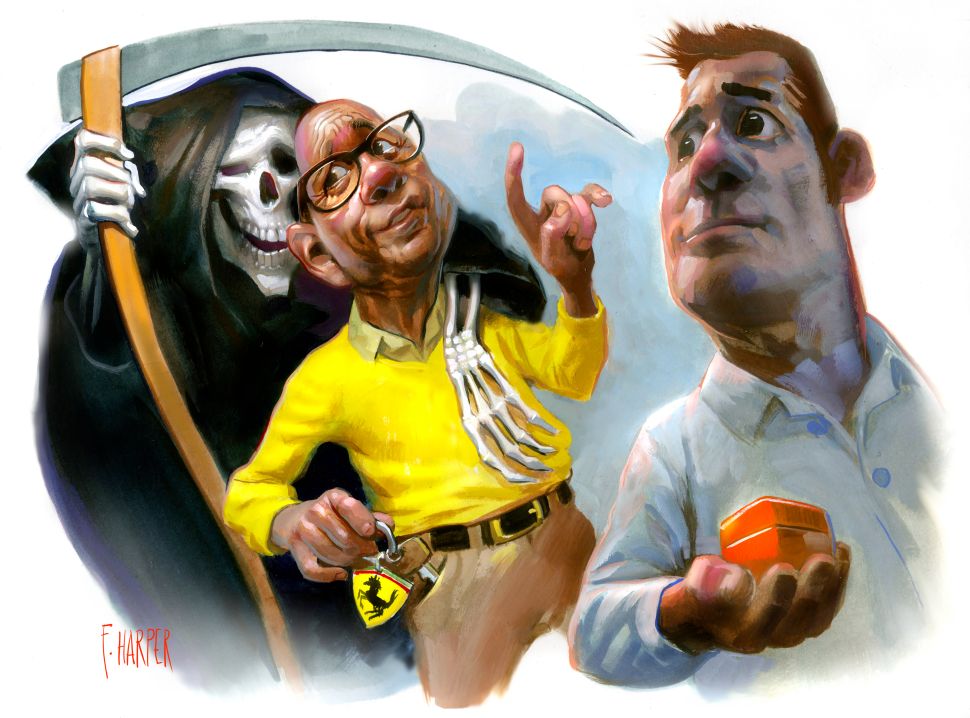