Chef Ramsay kicks things off by surprising the contestants with a pop quiz, asking them to name cooking’s essential ingredients. “Cream,” says one chef. “Oil,” says another. “Fork,” says nobody but I wouldn’t have been surprised if someone did. But the answer Ramsay is looking for is cheese. This week, the challenge is to create whatever dish you’re assigned after spinning the “Wheel of Cheese,” which means it isn’t quite so much a “Wheel of Cheese” as it is a  “Wheel of Cheese-Centric Dishes.” Semantics, people. These things are important.

As usual, the challenge is an opportunity for the contestants to display their ignorance of fundamental culinary facts and techniques. Informed that there are over 700 types of cheeses, the chefs bug their eyes and gasp in disbelief as though trying to contemplate what lies beyond the boundaries of outer space. Monique, the Ruth Reichl of Hell’s Kitchen, is particularly impressed. “Holy shit, I gotta catch up on my cheese, bro! Dang, 700 cheeses?!” she marvels. Some of the other chefs are stuck on more basic concepts. Brendan has never heard of a croquette. Milly confesses he has never eaten nor prepared an enchilada, but is confident in his dish because it resembles what he’s “seen in restaurants and on TV.” Sarah, told to think outside the box in preparing her lasagna, cheerfully improvises by dumping a bag of nuts on top of the dish. “Why not pistachios?” she chirps. Because it’s gross, that’s why not.

The contestants go head-to-head presenting their plate to Chef Ramsay. This time around, he decides to award several points to both teams for the same dish, as if we needed more evidence that the scoring system on this show is an arbitrary joke. Bret blows it for the guys when his first attempt at calzone falls apart in the oven and the red team takes the win in a squeaker, earning them an afternoon of jet skiing in Marina del Rey. The ladies are so excited to be back out on the , they don’t even notice the producers were too lazy to bother coming up with a new reward and just decided to send them back out on the .

While the gals enjoy the sun and surf, back at Hell’s Kitchen there is much wailing and gnashing of teeth. Bret and Milly are both literally weeping over their loss, to the point where the gay guy on the team has to tell them to pipe down and suck it up. Milly, I feel for you, my man, but you don’t engender much sympathy when you don’t know what an enchilada is. Wash your face and save the cheese for the recipes. Meanwhile, with dinner service looming, Bret tries to motivate the team. “Not only are the girls gonna lose tonight, we’re gonna win!” he bellows, demonstrating his comfortable grasp on the concept of binary outcomes.

And with that, the restaurant is open for fake business. (Tonight’s embarrassed-to-be-there-semi-celebrity: Megadeth’s Dave Mustaine!) Do I even need to tell you how service goes? Bad risotto, bad fish, and a veritable garnish holocaust. Watching the chefs putz around the kitchen pretending they know what they’re doing reminds me of the way Steve Carell describes sex in The 40-Year-Old Virgin. They tentatively poke at the ingredients like an Amish guy who was just asked to change a carburetor. In particular, Brendan struggles to getting his meat done on time, and Chef Ramsay lays into him to the delight of Mr. Mustaine. “See that little guy in the back,” he tells his dining companion, “He’s the one getting yelled at all the time.” Ooh, Brendan! You thought you were serving customers tonight, but instead you just got served by Dave Mustaine!

When the carnage ends, the women are up for elimination. The choice is a no-brainer: enthusiastic but short-sighted Sarah, or Monique, who has somehow managed to survive four weeks despite not performing a single task correctly. Monique gets the boot and uses her exit interview to bemoan the decision and brag about her skills. Sorry, Monique. You may not get the gig in Ramsay’s kitchen, but at least nobody can take away the delusion that you’re talented. 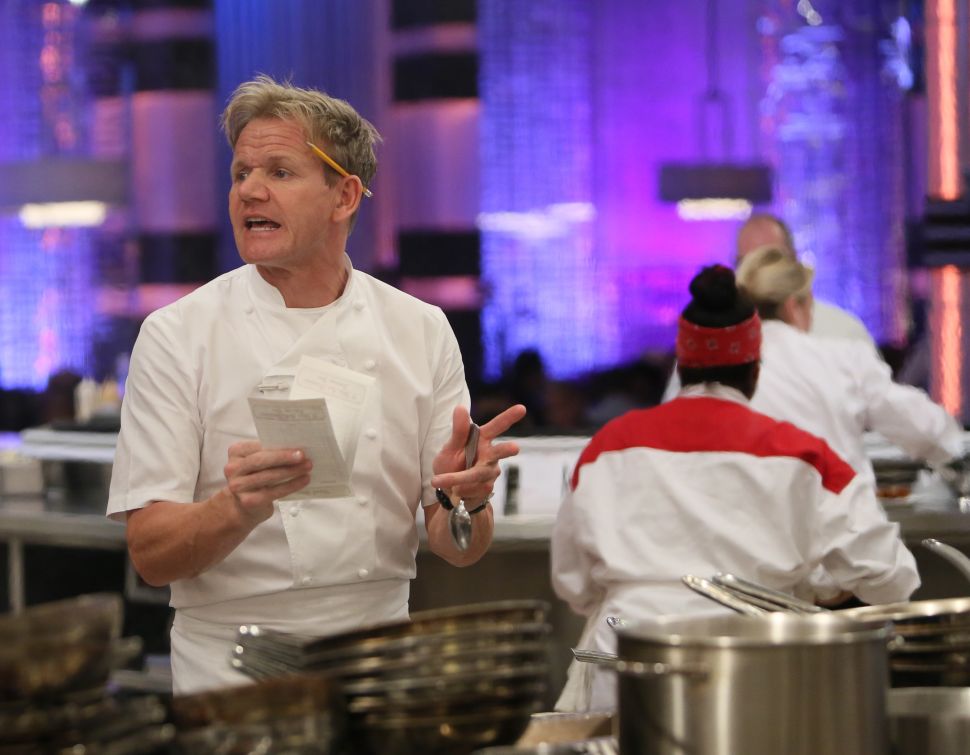