They say the definition of insanity is doing the same thing over and over again and expecting a different outcome. If that’s true, then I am just crazy about watching Hell’s Kitchen! Every episode hits the same beats so often that I half expect the show’s editors just sit around getting high and stitching together old footage knowing nobody will ever notice.

Yet again, Chef Ramsay kicks things off with a cooking challenge that appears coherent on its surface, but that makes no sense once you break down its many arbitrary components. This time, it’s Greek cuisine, teeing up the now-familiar montage of contestants whining about how they’ve never cooked Greek food, or tasted Greek food, or met a Greek person, or seen the movie Grease. Something tells me that if the challenge were to boil , at least one chef would declare, “I’ve never seen hot like that, so I’m just going to do my version of and hope it works out.” Never content to simply let the chefs muddle through unfamiliar territory, Ramsay adds an idiotic twist by forcing the chefs to smash plates to discover what ingredients they can use, in celebration of the ancient Greek tradition of being violent drunks. And of course, the whole thing is timed, natch. The contestants fully admit they’re not even looking at the ingredients and are just desperately grasping at whatever index cards are revealed among the flying ceramic shrapnel. After a few minutes of this chaos, Chef Ramsay announces that the dishes will be judged on their “authenticity.” Sure, let’s see how this goes.

Not well for Josh, who doesn’t leave enough time for his meat to rest and literally serves Chef Ramsay a plate of lamb’s blood. On the upside, good ol’ boy Randy, who despite being unable to name an ingredient in Greek cuisine, is awarded a five out of five for a disorganized pile of chicken and eggplant. Guest judge Michael Psilakis declares, “I don’t think you can get more Greek on a plate,” which makes me think maybe they just hired a guy off of Hollywood Boulevard to play the part of guest judge Michael Psilakis. The blue team manages a win, earning themselves a day at the go-kart track while the ladies have to clean up all the broken plates that are still dangerously scattered around the floor of this very real, totally official restaurant.

Chef Ramsay’s signature nastiness has evolved a bit in the past few weeks, and this time he cranks the schtick up to 500 degrees, oozing condescension like a piece of unrested lamb oozes blood. He’s moved beyond just spitting swear words and flinging food and has taken on the role of disappointed parent, treating the contestants like they’re a group of four-year-olds with ADHD and instructing them to thank the very special guest judge as if he’s reminding them not to eat paint. Later, Ramsay takes Milly into the pantry for a time out, bringing the big man to tears. With fewer chefs in the kitchen each week, Ramsay is no longer able to simply crap on the contestants indiscriminately, and this weird half-therapist/half-kindergarten teacher routine is his alien way of relating to them on a personal level. I’d be insulted on behalf of the chefs if they weren’t so eager to lap up the attention. Early in the episode, Josh skips dinner with his fellow chefs, preferring instead to pace around the dorms chastising himself, “Don’t you lie to Chef Ramsay. You promised him. He wants my best.” I’m not sure what awful things have happened to these people that they are so desperate to be validated by an abusive taskmaster, but Hell’s Kitchen is basically Whiplash if JK Simmons’s character wasn’t such a nice guy.

I guess something is working, though, because this week’s dinner service is slightly less of a disaster than usual. Over in the red kitchen, Meghan’s disdain for her teammates knows no bounds. To her credit, I don’t think she’s ever been the target of Ramsay’s wrath, but she’s sick of helping her struggling teammates and clearly regrets ever having submitted an audition tape for this show. The guys make it through with few mistakes, save for a surreal incident involving a pot of soupy mashed potatoes that ends with seven grown men standing around yelling “Who put the cream in the mash?! Who put the cream in the mash?!” over and over again. The diners seem happy with the end result, with one tattooed starlet biting into her Wellington and commenting, “This is probably the best…[excruciatingly long pause as she tries to remember the name of the thing she’s eating]…beef ever.” So I suppose the highest compliment I can give the blue team’s food is that it’s “eventually recognizable.”

This week’s casualty is kind of a foregone conclusion. Sarah’s been up for elimination a few times thanks to her tendency to fall apart during service, and Meghan and co. waste no time throwing her to the wolves. By this point, all the obvious dead weight is long gone, and I’m looking forward to the next few weeks of separating the kinda-good from the truly mediocre. 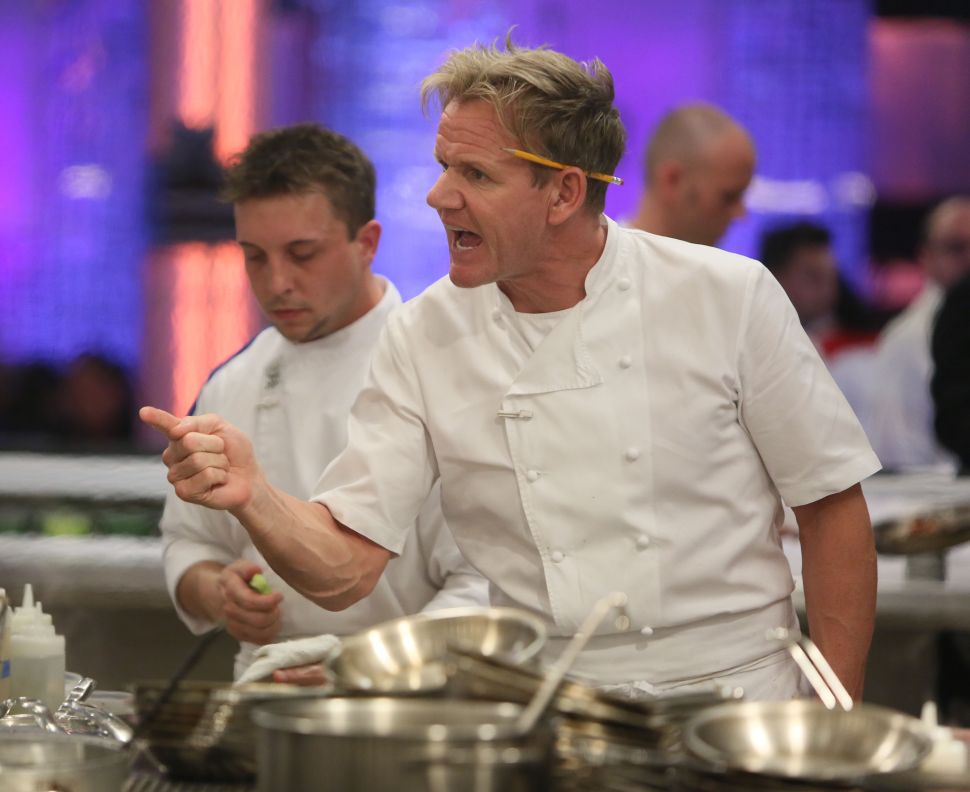