Los Angeles-based artist Jen Stark’s psychedelic work is oozing down the walls of a row of conference rooms inside Facebook’s recently constructed Frank Gehry-designed Menlo Park headquarters. Ms. Stark is one of 15 Bay Area artists, along with others like Barry McGee, Alicia McCarthy, and Barbara Hon, who have each been commissioned to install a site-specific work inside the new building.

In 2011, Facebook took over what used to be Palo Alto’s Sun Microsystems complex, with the intention of making it the company’s new headquarters, and moving its employees from “the other side of California’s Highway 84,” according to a recent piece in Wired. Starchitect Frank Gehry reached out with a proposal for the new campus, and with some tweaks to lower the building’s price tag, the rest is history. “MPK 20,” as its known, is a 430,000-square foot LEED Gold certified office dreamland, described by Mr. Zuckerberg as “the largest open floor plan in the world.”

So, what has Facebook opted to fill all that open space with? Aside from the employees who moved in on March 30, it’s being adorned with a whole lot of site-specific installations.

“The utility [of commissioning art in the offices] is inspiration,” said Drew Bennett, the Curator at Facebook’s Analogue Research Laboratory. “We’re looking to find artists whose practice is exemplary to any employee at Facebook. The art is there for employees, to help them consider things that are not possible.”

Ms. Stark’s piece is the company’s most recent acquisition. The artist has painted a “drip mural,” with layers of bright colors appear as if they’re melting, on several walls in the office.

The artist is best known for her work made from colored construction paper. Many of her sculptures are simply large cubes or cones, seemingly painted solid white, but a peek from another view reveals caverns of fluid shapes and hues that spiral downward in a series of geometric patterns. She has had solo shows at Martha Otero Gallery in Los Angeles and LMAK Projects in New York, showed with Eric Firestone Gallery at the Untitled Art Fair in Miami Beach in 2014, and did a very tricked out Gagosian Beverly Hill’s bathroom with a floor-to-ceiling mural that same year.

“I started out with the paper sculpture, that’s how I got my name out there. That’s all based on the spiritual world and the shapes in nature, and organic fractal shapes. There’s a little bit of math and a little bit of nature,” Ms. Stark told the Observer.

The Facebook mural is not the only large-scale she’s worked on. “I like doing both 2-D paintings and 3-D sculpture, just to give my mind breaks. I love doing both so it’s hard to pick just one. Sometimes I incorporate the two in one piece,” she explained.

If you’ve recently flown through Miami International Airport, you may have had a chance to see one of Ms. Stark’s other murals, titled Meltdown, it covers the ceiling between Terminals D and E with squiggly kaleidoscopic patterns that drip down the walls of the entryway.

The optical quality of her Facebook mural may look complex, but the artist took a freehand approach to creating the piece. She walked right up to the wall and drew on it with pencil, added just a dab of house paint with her finger to indicate the color she wanted each layer to be painted, and then filled it in with the help of assistants, paint-by-numbers style.

“It’s not just a painting on a wall or canvas,” said the artist of the location she chose for the mural, which changed from between the start and completion of the work since the building was still under constriction at the time. “I wanted an area that I thought could envelop the structure more, so I chose a kind of pod in the center of the space.” The mural will be a permanent fixture in the office.

“We’re just happy to be able to inject these artists’ ideas into a community of really talented and thoughtful individuals who really appreciate the work,” Mr. Bennett said. “The whole goal is to share this idea and to encourage more corporations, institutions, and companies to see the value of having strong visual discourse through professional artists and their work space.” 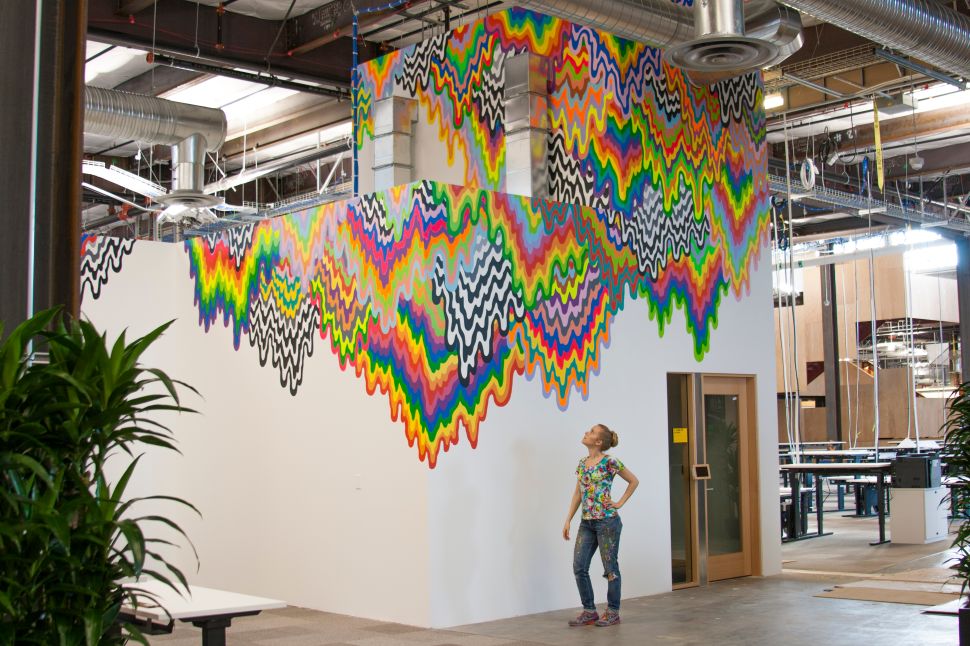