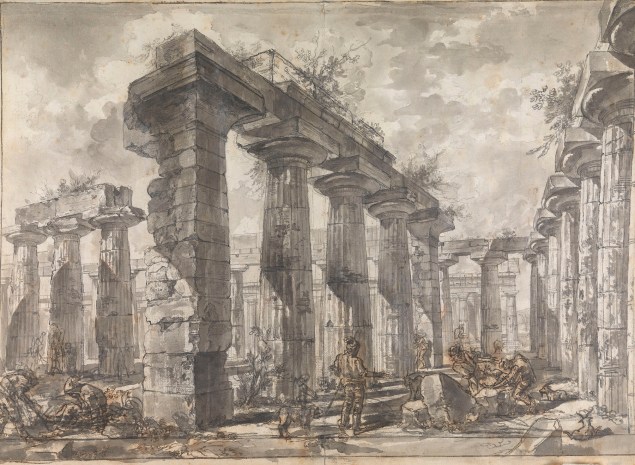 Giovanni Battista Piranesi,  View of the Interior of the Basilica, Looking North I (Study for plate V of the Différentes vues de Pesto (ca. 1777-78). (Photo: Courtesy of the Trustees of Sir John Soane’s Museum)

There is fine art. And then there is Very Fine Art.

The latter can currently be found in the teeny-tiny Clare Eddy Thaw Gallery of the Morgan Library and Museum. On the ground floor, right near its tea shop, is a perfectly enchanting little show: “Piranesi and the Temples of Paestum: Drawings from Sir John Sloane’s Museum” (through May 17).

Nearly every art lover, at one time or another, has been exposed to the etchings of Piranesi (1720-1778), the great Italian draftsman and printmaker. Most likely, what he or she best remembers is the bizarre “Carceri” (Prisons), a series of huge, very dark, and threatening subterranean vaults with strange stairways and peculiar machinery.

The current show at the Morgan is different. On its walls are hung 15 good-sized drawings (all about 24” x 36”) made by Piranesi, in the year before his death, of the relatively well-preserved remains of the three Greek Doric temples at Paestum, a seaside town some 60 miles south of Naples.

In a vitrine are two prints that were made from two of these drawings, but the real excitement is the drawings. This is so not only because the prints were made after the artist’s death by his son, Francesco, but also because the drawings are so much fresher, so much richer – executed, as they are, not with scratches on a plate, but in brown ink and wash over chalk, with all the lustrous layering and detail that this method affords. 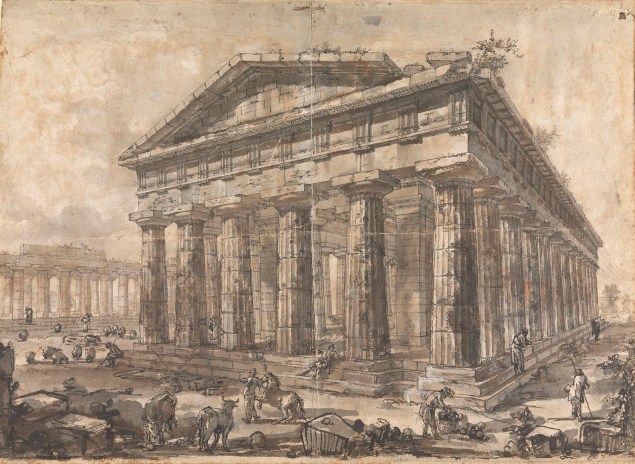 Paestum was originally a Greek colony called Poseidonia (in honor of Poseidon, the Greek god of the sea; the Romans called the same god, Neptune). It was founded around 600 BC, and its three surviving temples were built between 550 BC and 450 BC. Because of this relatively early date, and (one imagines) also because they were in the provinces, far from the latest styles, they are for the most part marvelously crude examples of the Doric, with thicker columns, squatter capitals and chunkier proportions than the single Doric temple we are all most familiar with — the Parthenon.

This is one big reason why I like them so much—and Piranesi captured these proportions perfectly. Not that his columns don’t soar above the viewer, but they never lose their firm attachment to the ground.  Nor is this attachment threatened by all the perspectival trickery that he used to make them grander & more majestic, for example by lowering the vanishing point so that the columns appear to tower over the viewer.Sometimes he used two vanishing points to capture two parts of a building better and/or sited a vanishing point beyond the edge of the drawing. 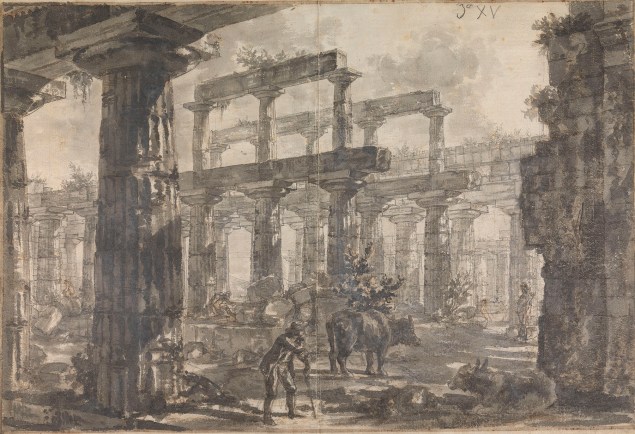 Paestum had been abandoned since late Roman times. It was rediscovered in the 18th century, in the wake of the rediscoveries of Pompeii and Herculaneum.Interest in classical antiquity was mushrooming throughout Western Europe, but the site Piranesi portrayed was still bucolic, still an unrestored backwater. This is vividly suggested by all the little plants and tiny trees growing out of the ruined temples and waving in the breeze.It’s also suggested by what they used to call back in the 18th century the staffage, meaning all the little country people and their animals that populate the foregrounds of these drawings. I spotted goats & goatherds, cattle & cowherds, men on horseback, fishermen mending their nets (from what I could tell—anyway, a label says they’re mending their nets, and reminds us that Paestum was near the coast).

There’s an additional dynamic here, a tension between, on the one hand, how big those temples loom, and, on the other hand, how much they resemble outsized & disarmingly cute nursery doll houses..Part of this effect may be due to the fact that all or most of the staffage is outsized in proportion to the buildings, leading scholars to suggest that these figures were added later by other hands. But another part, I think, is the serene confidence with which buildings, people and animals are all rendered, the serene 18th century confidence in a perfect clockwork universe, assembled by a mighty deity who had then left his little world to run itself.

And incidentally…while you’re at the Morgan, you might also enjoy “Exploring France: Oil Sketches from the Thaw Collection” (through October 4). This is thirteen little 19th century oil sketches of French landscape, down on the lower level (or what might more indecorously be called the basement).

Most of these are by artists you never heard of, but what they produced is almost invariably diverting. All were originally acquired by Eugene V. Thaw, that eagle-eyed collector who is a trustee of the Morgan and one of its most generous donors; all have since been given by him to the Morgan or to the Metropolitan Museum of Art. 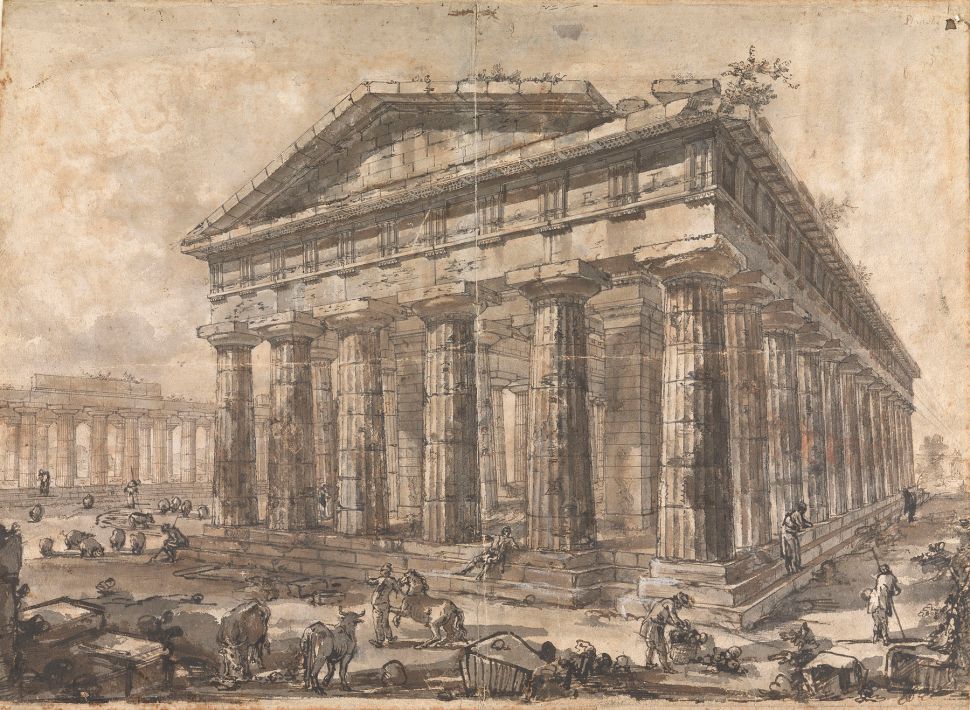