From a 2016 perspective, U.S. Senator Menendez (D-N.J.) wounded boomerangs beyond the boundaries of New Jersey politics and onto Hillary Clinton and her presidential prospects.

The feds indicted Menendez this afternoon.

“She will have to distance herself from him,” a Menendez ally told PolitickerNJ. “It takes away a lot of that Hispanic appeal. He is the most prominent Democratic Hispanic and if he is not visible, [Florida Senator Marco] Rubio comes out a lot stronger.”

Clinton and Menendez have a longstanding political alliance and party sources expected the New Jersey senator to play a front-line national role as a Clinton surrogate. Even if he ultimately survives the indictment, if he’s bogged down in federal court for the foreseeable future, he will not be able to play the part of super-sized Hispanic ally for Clinton next year, according to fretful Democratic sources.

“Hillary will stay away from him until he is completely exonerated, which wont happen in a year and a half,” the source added. “I think it’s a game changer, actually.”

Clinton will have to shift to a bifurcated Latino attack plan, relying more heavily on Los Angeles Mayor Antonio Villaraigosa and U.S. Rep. Luiz Gutierrez, neither of whom has the stature Menendez has as a U.S. Senator. Former San Antonio Mayor/Housing and Urban Development Secretary Julian Castro is another presence groomed by the Democratic Party and could take up some slack but again, he lacks the political contacts and projection of Menendez.

“These [politicians] aren’t from the east,” said one source close to Latino organization politics. “They will have a hard time truly penetrating like Menendez could have done. …Menendez was important because of the Latino component, especially if Jeb [Bush] is the candidate – Latino wife and kids that he parades around. Hillary needs a Latino surrogate and that was supposed to be Menendez.”

“Nationally, nobody has Bob’s experience or reach,” another source said. “They don’t bring to the table the real policy wonkishness that he brings. He’s a perfect fit for her because he’s not personable. He’s a wonk who gives credibility to your policies. He’s not going to take the limelight. It is really unfortunate.”

Menendez was a forceful political presence for Clinton in 2008. “We have an opportunity here in Hudson: Hudson, Hispanics, Hillary and history,” said the U.S. Senator from Union City as he introduced the Democratic Party frontrunner in New Jersey less than two weeks before the Feb. 5th primary.

Menendez helped coordinate the fundraising front, hosted numerous events for the candidate, delivered New Jersey against Barack Obama,in a competitive primary, and stumped vigorously for her through a long campaign of attrition. Never a natural ally of President Barack Obama, Menendez increasingly appeared publicly reanimated with the prospect of 2016 politics and his role as Clinton’s chief Latino ally in the public eye.

Now unless U.S. Senator Cory Booker (D-N.J.) – not a natural Clinton ally – steps up, New Jersey with Menendez diminished heads into 2016 sapped of political strength in a national context. “With Bob around, his presence prevents a free for all of every B grade politician,” a source told PolitickerNJ. “It does strengthen the hand of Hillary’s [New Jersey] finance chair, Michael Kempner ”

Significantly, too, it apparently buries another possibility for the former chairman of the Senate Foreign Relations Committee. “He’s destroyed as [a candidate for] secretary of state and now he’s fighting for his political life,” said a Menendez ally. 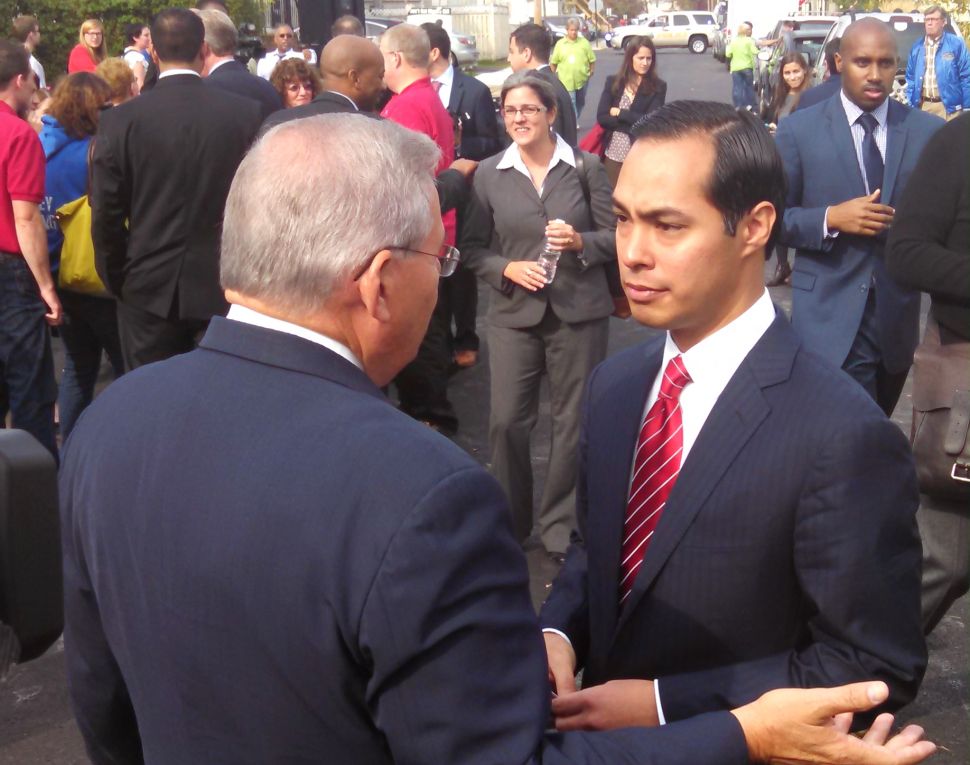