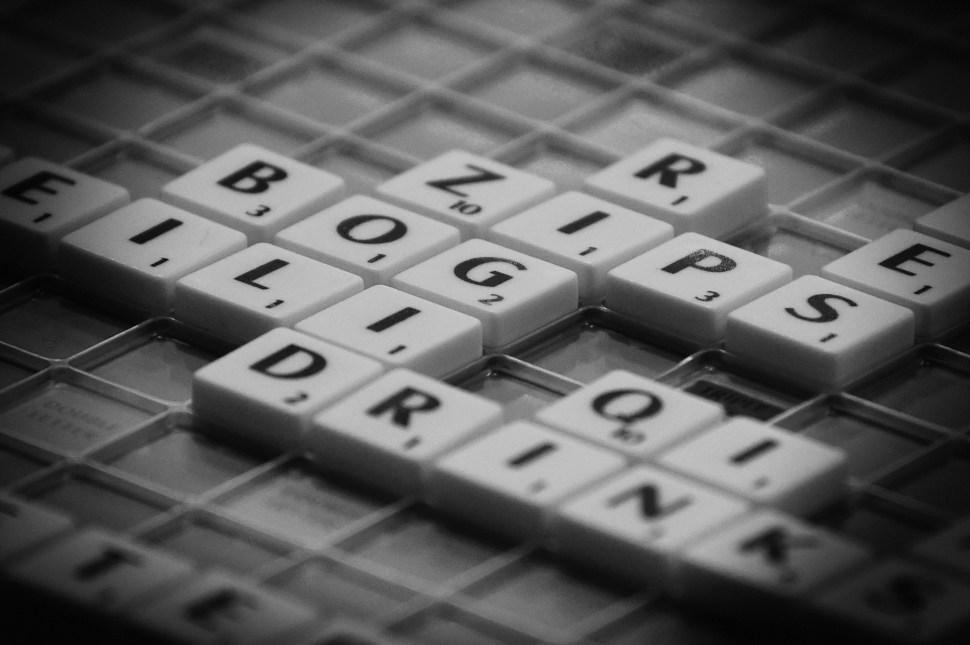 Scrabble. Has there ever been a better game? (Photo: Gareth Cattermole/Getty Images)

Sitting at my desk in SoHo one recent late afternoon, I just knew I was forgetting something. After a thorough inbox search, I figured out what it was: Alfred Butts’s 116th birthday.

Butts was the down-on-his-luck architect who invented Lexiko—the game that would become Scrabble—during the Great Depression. Hasbro, Scrabble’s corporate overlord in North America, has embraced the anniversary, and was throwing a “National Scrabble Day” event, for media (like me) and others, to celebrate and showcase the game and demo a new product—Scrabble Twist—that if you squint I suppose has a tangential relationship to Scrabble itself.

I’m already late, but being fairly sure there will be an open bar, and being a Scrabble enthusiast myself, I scurry to the 1 train. I arrive at the Ace Hotel in midtown and quickly locate the proper basement lounge. I long ago developed a Pavlovian response to lettered tiles shaking in velveteen bags.

Further motivation for the journey is that I may get a crack at Conrad Bassett-Bouchard, the reigning national champion. He and Will Anderson, ranked fourth in the country, will be the stars of the event, brought in by Hasbro to show off the game’s serious side. The two elite players are holding court at Scrabble boards in the two back corners of the lounge. Happily, my open bar suspicion was confirmed, and after my second Allagash White, I grab one for the road and slowly creep in Bassett-Bouchard’s direction. But I’m intercepted.

“Would you like to play Conrad?” one of the event’s hosts asks. Hell yes I would. “Sure, uh, if no one else is waiting,” I respond.

I’m escorted over to the champ. He’s finishing up a 600-something-point demolition of some bewildered guests. Eventually he turns and notices me. “I have to play him?” Bassett-Bouchard asks my escort. I can’t tell if he’s joking or truly annoyed. “He could actually beat me.”

We don’t know each other well, but I interviewed and wrote about Bassett-Bouchard after he won last year’s nationals. And I’m a lapsed competitive Scrabble player — I peaked at a rating of 223rd in the country.

But Bassett-Bouchard protests no further, and I take my seat across from him. Hasbro has rolled out the red carpet, but I try not to let the free assorted candies immediately to my left distract me.

We draw tiles to go first, and Bassett-Bouchard wins the honor. He starts off with WINK, scoring 22 — innocuous enough. I turn over my tiles and am pleased with what I see: AAIMOT?. (The “?” in Scrabble notation represents a valuable wildcard blank tile.) My hands are actually shaking a bit at this point, though, the now-two-and-a-half beers notwithstanding. I’ve never played a reigning national champion of anything before. I take a breath and declare my blank a T, dropping ANTIATOM down through the N in WINK, good for 62. (It turned out not to be my best possible play — ANIMATO overlapping WINK is worth more — but I’m pleased with the style points.)

We trade jabs for the next few turns: Bassett-Bouchard slaps down LAZULI for 35. I try to burn through some tiles with FOREIGN for 22. It doesn’t really work, because I just draw a bunch of vowels. Bassett-Bouchard hits again with EXILER, spotting the X on a double-letter and reaching to a double-word. He scores 42 and pulls slightly ahead.

But this also gives me a perfect spot to cure my vowelitis, and the bout shifts heavily in my favor. I play EAUX to his X for 33, and draw another S. Bassett-Bouchard is clearly dealing with some ugly letters himself, and plays off a bunch of consonants, scoring just 16. We’re essentially tied until I make good use of my newly-acquired S, playing BIDETS along the bottom row, hitting the triple-word, and extending my previous bingo into ANTIATOMS, for 46.

It goes from good to better, and the next tile I draw from the bag is the second blank. Accompanying that lovely tile are the letters ADEJRU. I spot something immediately. After Bassett-Bouchard gets rid of the clunky Q by playing QI—a life force, in Chinese culture—I immediately slap down ADJURES, making WINKS, for 89 points. I’m now up about a hundred.

Bassett-Bouchard’s elite skill shows through, though, as he plays the remarkable TOOTED, alongside my ADJURES, forming AT, DO, JO, UT, RE and ED, all good Scrabble twos. It’s worth 44. He then cleverly sets up a juicy spot I can’t block, and then gets down the bingo ARCHERS for 94, pulling nearly even. I buckle down. Focus. Sip my beer. I get some back with MANGO, extending ARCHERS to MARCHERS. I also find YONIC for 36 and VEINY for 38. Bassett-Bouchard is working through some awkward racks, I can tell, and as the bag is emptying, I manage to get lucky again and snag the last two S’s. Bassett-Bouchard makes a desperate setup, hoping that he can draw an S and land one more uppercut bingo.

But it’s not meant to be.

Mr. Bassett-Bouchard is, needless to say, un-thrilled by the result, but he’s gracious. I snap a picture of the final board on my phone, and make a mental note to Instagram it later. We shake hands, and I head over to see the other top player.

The event was drawing to a close, so fourth-ranked Anderson and I agree to play a speed game — just a few minutes a side. Oh, and I beat him, too. Or at least I’m pretty sure I did. We didn’t really keep score.

Best National Scrabble Day ever. And happy birthday, Alfred. Thanks for all the fun. 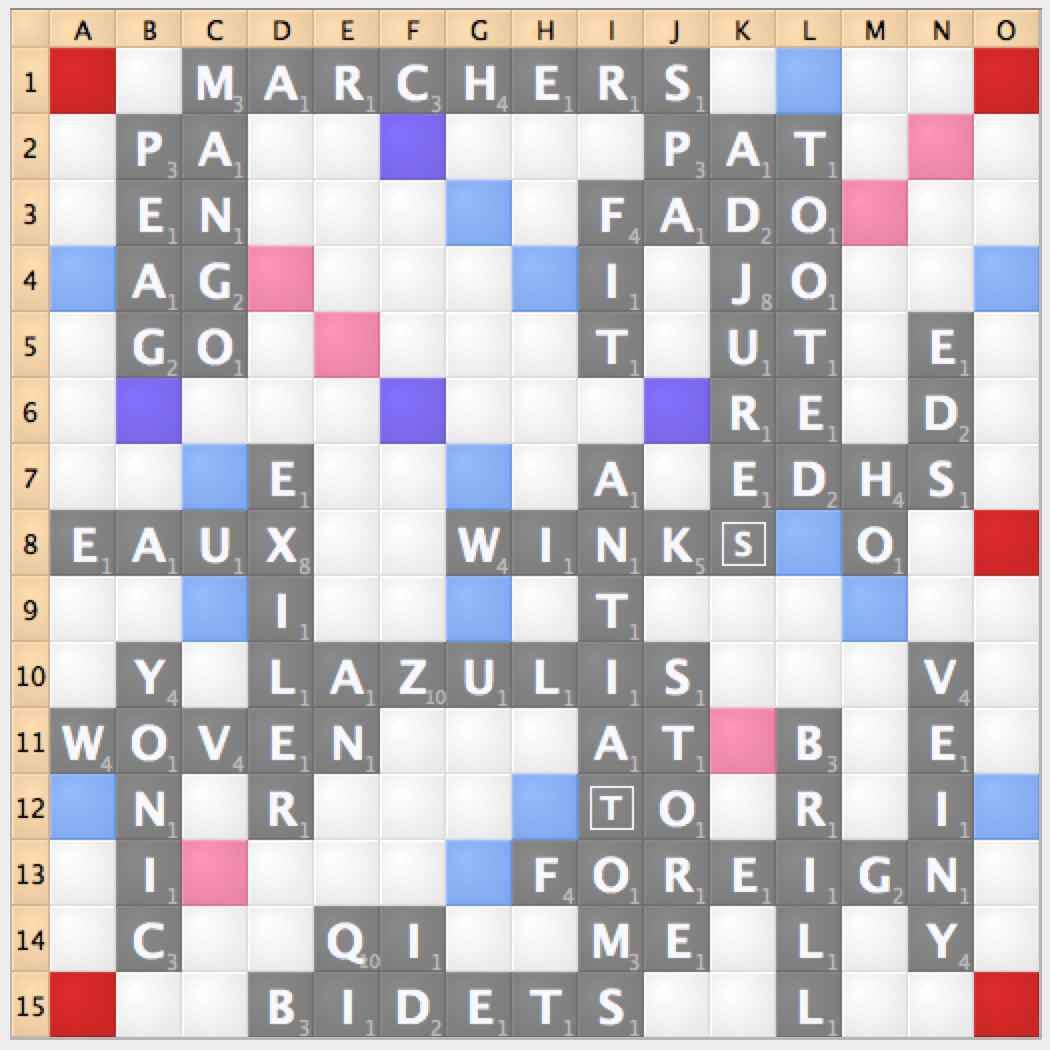 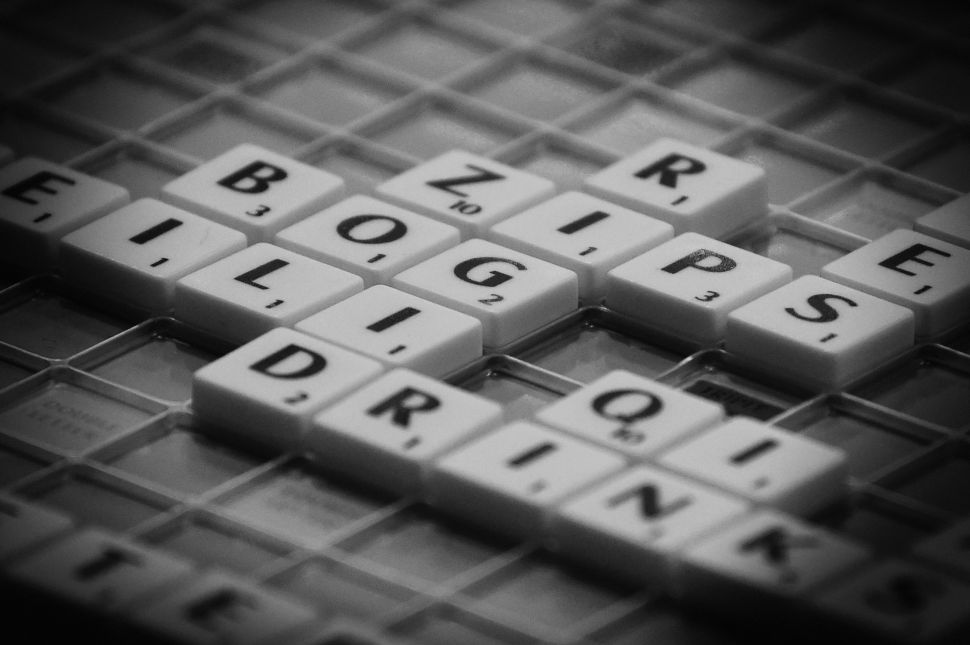