I’m disguising you. So don’t worry.

I know you told me not to get swept away, but I guess I did. I’m listening to house music right now and it makes me think of how we roared through Manhattan in your Mercedes. Remember that one time the seat heaters were on high and we made out under the snow? You kissed me and said, “Let’s do my favorite thing, let’s look into each other’s eyes.” That was my favorite thing, too.

Our time together was cut short, and I’m sad. Right when we were beginning to really like each other, you jetted off to Zurich for business and your texts grew curt. I’m sure part of it is that I got OCD about my back spasm the morning after Valentine’s Day since it tweaked from doing it doggy style, but I forewarned you I have post-traumatic Valentine’s Day stress. You’re right, I should have reflected before I reacted. But I was irritated you had been incommunicado and showed up an hour and a half late to pick me up for dinner due to your untimely siesta. I thought you had been hit by a car—or worse yet stopped liking me.

I should have listened to you when you said you no longer believed in the irrationality of love. I thought if I kissed you hard enough I could change your mind. Do you remember that night we went to the Book of Mormon, and after each act, instead of clapping, we pumped our hands together like a beating heart? Then you whisked me off to Nobu and ordered us the Wagyu beef. It was delicious but then I compared my bank account to yours and felt inadequate. You told me I was contributing my time and that was worth just as much as money. That was kind.

I know your upcoming travel schedule is crazy and you suggested maybe we could revisit things in a year, but my body wants you now. I keep touching myself thinking of when you pushed me down and said, “I can’t decide if I should romance you or treat you like my little whore.” And as you entered me I said, “you’re such a man” and you squeezed my breasts and said, “you’re such a woman.” Or that other time, when you held my legs open in a V and I said, “Don’t let them fall” and you tightened your grip around my ankles and said, “I’ve got you.” Well, that was bullshit.

Did you really want to be my Prince when you called me Princess? I shouldn’t have gotten all feminist on you, it’s just I feel like princesses in fairy tales are helpless and I’m trying to move away from the victim mentality. I know I told you to call me Queen or Goddess instead but when you moaned “my Queen” mid-thrust it just felt wrong. If we ever make another go of it, we need to come up with something fresh.

You’re so dominant. Like that time when you were wrapping up a business call, your right hand up my thigh, your left on the wheel and this loser guy tried to walk in front of your car. You beeped and barely raised your forefinger pointing to the green light like he was a piece of shit and stepped on the gas. I wanted you right there. We sped up Park Avenue with Robin Schulz’s remix of “Prayer In C” blasting and ended up at Mr. Chow. It was jam-packed but you got us that nice corner table. I sipped my rye Manhattan and watched you order the dumplings, fried mushrooms, Shanghai cucumbers, filet mignon, sea bass, seaweed salad and those lettuce chicken wraps. Spending time with you was like a super-sexed, all-expenses-covered vacation from my life.

I’m really sorry I forgot your birthday. I know I asked you for your birth details five times so I could look up your astrological chart to see if we were a match, but I felt so neglected I could only focus on the hurt. I tried to make it up to you by having that red velvet cake sent to your apartment but I screwed that up, too. Do you know how hard it is to find pastry shops in Tribeca that deliver at 5 p.m. on a Sunday? That’s why I showed up at your place, cake in hand. And no, I did not plan on sleeping with you, but I did appreciate the Uber ride home.

You had this great knack for spinning my neurosis into laughter. You lightened up the cold heaviness of winter with your enthusiasm. But we were ultimately strangled by roles and rules. During what seems likely to be our final brunch, we discussed our differing visions of marriage. You told me you’d take care of all the financials but expected your wife to tend to the baby at four in the morning. When I balked, you said you’d take the kid to all his baseball games and that was a far better deal since that would be for, like, 18 years! What if we had a girl, or our boy preferred modern dance? At that point, I felt lonely and thought how did I end up so far from the closeness I really want?

We talked about religion. I know I’m only half Jewish on all the wrong sides and I was sincere when I told you I was open to converting, but it just seemed like an inopportune moment to order that second helping of smoked bacon. Obviously, I’m conflicted. I have a strong desire to be swept away and carried off by a prince, and yet I don’t want to be rescued like a princess.

Do you ever wish we could take our bodies off like clothes? Under all the layers of circumstance, I think our souls would really get along. But in the meantime, you must have known I couldn’t live up to my end of the bargain. I may have worn all those flirty dresses, and played your cute, sweet little girl but ultimately it was a role. I was so turned on by our Tarzan and Jane act, I forgot it was make believe. Well, Jerry, I had fun, but it’s time to strike this masquerade. My costume’s choking me and I need to speak. 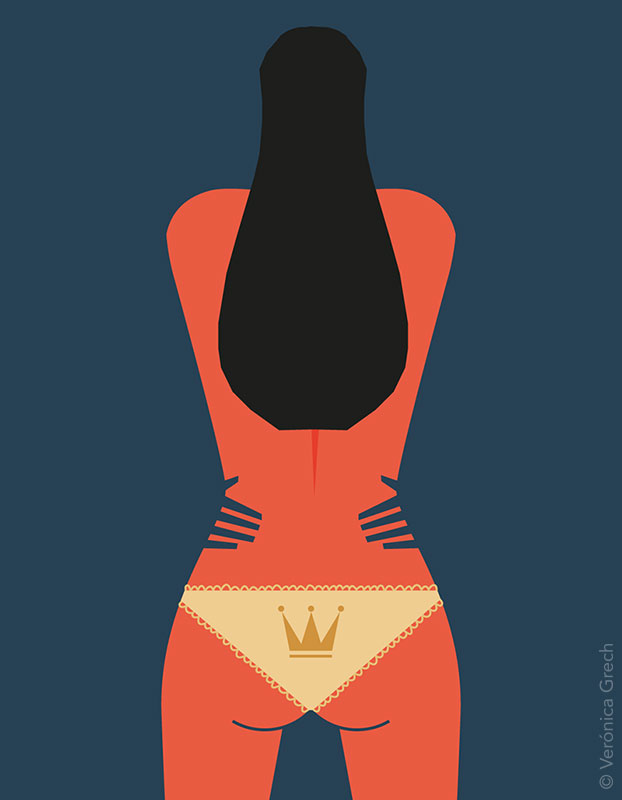