Social Media Guru Chris Brogan once wrote a post for Entrepreneur about how he was “nuts for Google+”. Brogan even went as far as calling the platform “The next big thing.” He was so “nuts” for Google+ that he even wrote a book about it called, appropriately enough, Google+ For Business: How Google’s Social Network Changes Everything. Curiously, that book is no longer featured on Brogan’s website along with the other books he wrote. Gary Vaynerchuk, before hilariously reversing course like he always does, told an audience that he was “bullish” on Google+. Guy Kawasaki told readers in his book, What The Plus! Google+ For The Rest Of Us, that he “fell in love with Google+” going so far as to state that Google+ was “as special as the Macintosh”, which he never misses an opportunity to remind you he was involved in the marketing of. Maybe not coincidentally after releasing that book and hyping the service, Guy Kawasaki was rewarded by Google and made an advisor to Motorola back before Google sold that company to Lenovo. (What … you didn’t think these guys worked for free did you?)

We now know that Google+, at least as intended as a social network and potential rival to Facebook and Twitter,  is dead. Even the marketing blogs are breaking out “think pieces” about what its death, official or more likely a slow and gradual phase out, means for marketing. But here’s the funny thing about Google+ if you’re thinking that it just died: The service was dead since Day 1. Especially in terms of its value for the people Brogan, Vaynerchuk, and Kawasaki wanted to have use the service: Agencies, brands, and other people looking to cultivate a presence to earn your time, traffic, and attention. The same year that Brogan was “nuts” for the service, a report came out from comScore stating that, at most, people spent three minutes on Google+. Did Brogan and friends intentionally ignore the study? Or did they just not see it? If they didn’t see it, that should already cast some doubt on any statements they made given that their job as marketers and consultants for agencies and large brands is to be on top of these things. Somehow I don’t think “oops” covers that big of an oversight.

But wait, it gets better: Google+, like Google Wave before it, was a bomb. Like any bomb, it had its admirers (people still went to see “Jupiter Ascending” didn’t they?), but throughout Google+’s history, it was never clear how many users it had, and of those users, how many of them were active and how Google was determining this. Funny enough, despite “loving” the service, even Kawasaki told a crowd at SXSW that he was concerned with Google’s lack of information concerning how many users the service had, which of course didn’t stop him from continuing to promote the service anyway.

The shady user totals thing is a common Silicon Valley tactic. For example, Instagram was bragging to the media not too long ago about being bigger than Twitter, then purged millions and millions of accounts a week later. Still think its bigger than Twitter now? Well, funny you should ask because Twitter’s own accounting of users is pretty shady too, so we really have no idea who is bigger. And of course, the media just goes along with whatever Twitter, Instagram, and others tell them because they don’t know any better.

(Here’s something we do know: 70 percent of Instagram users are not based inside the United States, so if I was an American brand giving my agency money for an Instagram campaign, I’d start thinking twice about it.) Another example while we’re on this subject: We have no idea how many active users Vine has since Twitter hasn’t said anything in years about it. Yet somehow popular Vine users are getting advertising deals. To the surprise of no one, this is also something Vaynerchuk has tried to cash in on by creating an agency to represent Vine “stars”.

So by no means do I fault Google for the shady accounting when everyone else in the Valley does it. If you find a startup or tech company out there that isn’t lying about something, let me know. I’ll burn my Los Angeles Dodgers stuff and start cheering for the San Francisco Giants, but I can tell you it isn’t going to happen. It’s not going to happen because there’s too much at stake in terms of money, recruiting talent, and public perception. As my friend Tyler Spalding at Tastebud Technologies often says, “Tech is a high stakes game, and established companies and startups will do whatever it takes to win.” Google is no exception.

I write this because there’s an accountability problem, and that problem is a major factor in the bubble that’s forming around B2C tech companies and startups. You might not care about what company Gary Vaynerchuk is pimping this week because he invested in it (MeerKat, which is hilariously failing) but you do care about what happens when that bubble bursts.

Because let me tell you, that bubble will burst. I’m not saying there’s a “Tech Bubble” because that’s an ignorant statement to make; however, among a particular sector of tech companies and consumer facing startups, re: Businesses built around advertising and giving things away for free in the hopes they attract venture funding long enough to sustain themselves until Google or Facebook buys them, there is. When that bubble bursts, I imagine you’re going to want the names of the people responsible, because there’s always a trickle down effect. And that’s why you should care about how often these guys are just flat out wrong. Sooner or later, their BS is going to affect you, and you’re not going to like it when it does. (This also extends to “growth hackers” who can paint you a pretty narrative about how a company grew that leaves out all the actual factors that lead to that company’s growth. But you know, it was totally the referral program that did it. Right guys?)

So what we have here are ignorant people (Vaynerchuk, Brogan, Kawasaki, and friends) telling big brands and agencies to dump their money into unproven platforms, or platforms with really shady metrics that they can totally fudge and claim their successful to journalists who don’t really know better. A tech blog may know to call out Vaynerchuk’s portfolio company, MeerKat, for spamming Twitter in order to grow their service, but other publications like AdAge won’t. And guess which one of those publications the brands and advertisers are reading? So the money continues to flow from the agencies and brands and that leads to VCs continuing to prop up these companies.

So what do we do? Because we know something has got to give here. I can tell you from working with agencies, they’re a few years behind, so you won’t see anything change right away, but they will catch up. It’s only a matter of time. And when they do, it’s going to get ugly for B2C startups and tech companies hoping to be propped up by those ad dollars. We can all save ourselves a lot of trouble, not to mention millions of dollars and years worth of time, if we start doing the right thing, and just started taking what these guys say as the joke that it is, but that’s not going to happen. There’s cognitive biases at play, people have invested a lot of time and money into them, so they don’t want to look foolish by saying they’re wrong. That ain’t happening.

No. Unfortunately between page view based incentives for bloggers and cumulative advantage, we’ll never truly be rid of these awful social media hucksters and their growth hacker friends. But you, you reading this, there is something that you can do: Don’t let Google+’s demise go to waste. When you think about growing your company, or helping your friend’s company grow, or just talking to people about online marketing, the next time they mention any of the gurus I talked about in this article? Hit them with the facts about Google+ and how wrong those guys were. Because in the past there were a few examples of how wrong these guys were, but they were small and nobody really cared, but Google+ is a Google product. One that got a lot of attention and hype from the press. And now we have this massive failure that was touted by these hucksters that we can all point to and go, “They don’t know what we’re talking about.”

By doing that, you’re doing everyone a favor. Not only that, you’re also cutting down the time it’ll take for that bubble to burst. Because you can’t have a discussion about Google+ without having a discussion about shady user totals and other accounting methods tech companies use to fool advertisers, and that’ll get enough people to pause. It’ll get them to take a step back, and that’ll cause enough of them to reevaluate how they’re spending their money.

When that happens, the bubble bursts. The jig will be up, and the survivors are going to be the ones smart enough to shun the hucksters and gurus now before it was too late.

B.J. Mendelson is the author of the book, Social Media Is Bullshit (St. Martin’s Press). 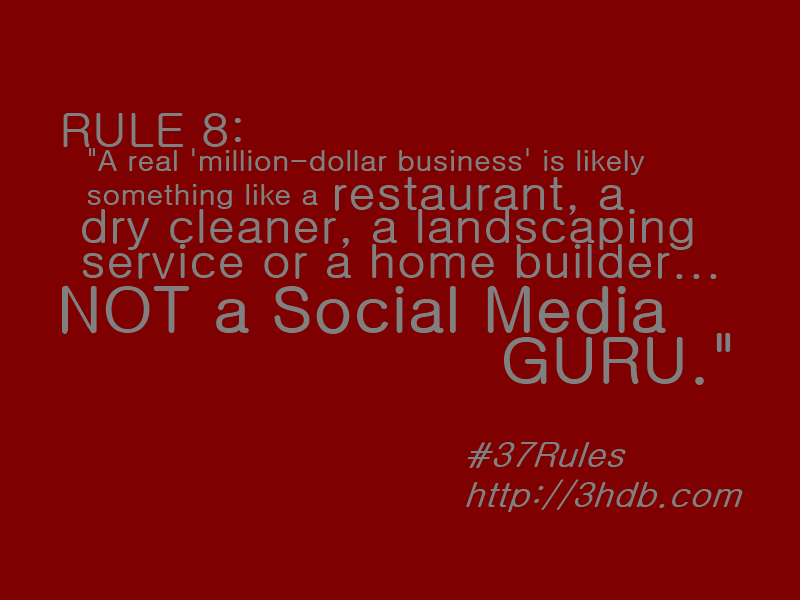