It’s only Tuesday, and already this has been a very bad week for Gov. Chris Christie.

The prospective presidential candidate returned from a two day retail politicking tour of the first-in-the-nation primary state of New Hampshire last week only to be met by a barrage of bad news at home. On Monday morning, Quinnipiac University released a poll that found him sinking to new lows among voters in the Garden State, with just 31 percent saying they approve of the job he’s doing compared with a whopping 56 who say they don’t. This afternoon, the New Jersey Education Association — the massive teacher’s union with which he was supposed to be working on a new round of pension reform and with which he brandished “unprecedented accord” at his latest budget address — announced they were backing out of talks with the Republican’s administration on the issue.

And Monday night, in one of the most personally damaging developments of his burgeoning national campaign, news broke that one of Christie’s closest confidantes in Trenton, state Senator Joe Kyrillos (R-13), would be backing former Florida Gov. Jeb Bush for the party’s nomination in 2016.

The events come as Christie continues to work to get himself back into the national blood stream after being knocked from first tier candidate status last year, as well as lay the groundwork for a 2016 campaign, one many political observers are looking increasingly skeptically on. But despite the negative headlines, Christie still finds support for his endeavors among Republicans at home — specifically in Assembly Minority Leader in Jon Bramnick (R-21), who continues to call Christie a “true American leader.”

“Look, I think that Chris Christie is an incredible leader,” Bramnick said during an unrelated appearance at Kean University today. “Everybody is entitled to their own opinion, I’m not going to tell other people what to think or who to vote for. But I can tell you don’t count Chris Christie out. This guy is incredibly charismatic, incredibly good on his feet, and tells it the way it is.”

The events also come as the state continues to face problems both fiscal and political in nature. A long-term fix for the state’s Transportation Trust Fund, which pays for major transportation infrastructure projects, has yet to be proposed. New Jersey’s public pension and benefit system, suffering from some $80 billion in underfunded liabilities, is still in crisis mode. And as lawmakers work to craft a balanced budget for fiscal year 2016 by the end of June that incorporates both those issues, little consensus has been reached.

But Bramnick maintained that Christie’s national ambitions, which have taken him out of the state frequently in recent months and which some have criticized as a distraction from his responsibilities at home, have not kept the Republican from working with lawmakers on both sides of the aisle in Trenton to address the issues. Rather, he located the problem in those Democratic leaders who control the legislature, earlier today arguing that they’ve failed to offer up real solutions in areas like the pension and transportation funds.

Christie and the NJEA had reportedly been working on a second overhaul to the state’s pension system, a follow-up to the reforms the legislature enacted in 2011, which includes a proposal to freeze the existing system and replace it with a new, streamlined one. Part of that plan, which Christie dubbed the “Roadmap to Reform”, would see NJEA manage its own pension fund.

But union members from both the NJEA and other public labors groups like the Communications Workers of America say they have seen no “good faith efforts” on the part of the administration to make the already scheduled pension payments, and next month will enter into a second court battle over the issue. They cite Christie’s failure to make a full payment into the system this year, as well as his proposed $33.8 budget for fiscal year 2016 that includes a payment of less than half of the one called for.

Bramnick, for his part, called NJEA’s decision to renege on their agreement with the governor’s bi-partisan pension and benefits study commission “a mistake.”

NJEA President Wendell Steinhauer, in his own statement today, explained the group’s withdrawal from pension negotiations with Christie’s commission by saying that the union’s “sole focus is ensuring that our members’ current pensions are fully funded by the state, and that no further discussion will be occurring between the NJEA and the commission.”

Ultimately, Bramnick said both parties will need to come to a bi-partisan agreement on the issue.

“I’m proud that the governor is running — is maybe running for president,” Bramnick said, hedging his statement somewhat. “From my point of view it looks like he’s out there thinking about running. But the truth of the matter is he’s had discussions with the Democratic leadership, and it takes two people to come to an agreement.” 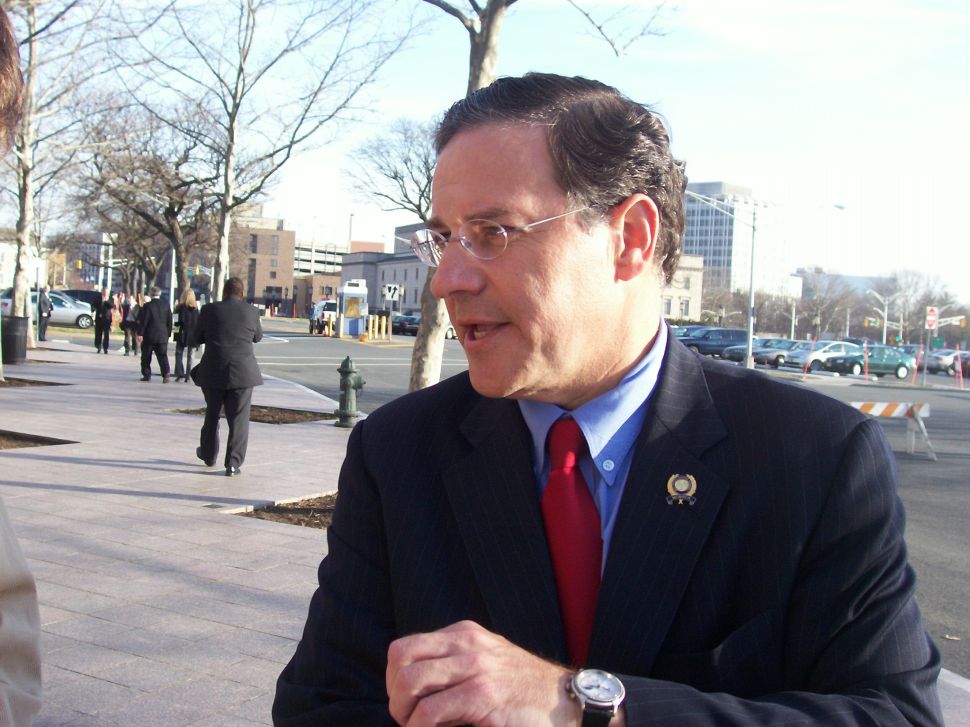