Mayor Bill de Blasio made addressing income inequality a hallmark of his 2013 mayoral campaign—and with presidential primaries approaching, he took the show on the road to the midwest today, outlining an eight-point progressive agenda that includes adopting some of his own signature policies nationwide.

Mr. de Blasio kicked off a two-day swing through the middle of the country in Omaha, Nebraska, where he gave a speech at the University of Nebraska calling on the country to adopt universal pre-Kindergaten and paid sick time laws to help close the wage gap that he deemed the “economic crisis of our time.”

“It’s not a theoretical problem for us to study, or a byproduct of a robust economy we must simply accept.  It is the crisis of our time,” Mr. de Blasio was set to say, according to prepared remarks provided by his office.

The mayor—perhaps overshadowed outside the tri-state area by the three-term legacy and billions of dollars of former Mayor Michael Bloomberg—has been working to bolster his nationwide profile, particularly among the progressive left wing of the Democratic party. He plans to hold a forum on income inequality for presidential candidates, and caused a stir this week with his decision not to immediately back the presidential bid of former Secretary of State Hillary Clinton, whose U.S. Senate campaign he managed in 2000. Tomorrow, he will head to Iowa, where Ms. Clinton is campaigning.

In his planned remarks today, Mr. de Blasio returned to a theme he first touched on in a Huffington Post opinion piece he wrote following the mid-term elections, which were disastrous for Democrats—that the party had not gone far enough left.

“In 2014, Democrats across the country talked about helping the middle class, but relatively few supported bold policies to actually stop the middle class from eroding. Very few did more than pay lip service to those struggling to get by. And almost nobody talked about poverty,” Mr. de Blasio’s speech reads. “It’s like that word has been erased from politicians’ vocabularies—even while it’s become more and more of an everyday reality for so many.”

The mayor laid out three ways to take on the crisis: by “making work pay,” offering help to working parents, and “honoring work, not just wealth.” From there, he offered more specific policy proposals he said could be enacted immediately—beginning with an increased minimum wage.

Mr. de Blasio made note that New York was “fighting” for a $13 minimum wage with indexing, to get to $15 by 2019. The political prospects of that plan are murky at best—the state legislature controls the city’s minimum wage, and Gov. Andrew Cuomo has proposed a considerably smaller hike. Even the governor’s more modest proposal was not included in the recent state budget deal. And New York’s state minimum wage is already $8.75, well above the national standard of $7.25.

Mr. de Blasio praised Nebraska for a recent hike to its minimum wage—now $8 an hour.

“You did so because there are no red wages or blue wages. Every American who works hard should earn enough so they’re not living in poverty. It’s as simple as that,” his speech read.

He also called for pressure on businesses to raise the wages of all workers, not just those earning the bare minimum, and for the creation of a wage-tracker to name and shame low-paying corporations and celebrate others.

A close ally of the labor-backed Working Families Party, Mr. de Blasio called on federal government contracts to “give special consideration” to businesses that recognize the right to unionize, blaming the decline of union power for the rise of income inequality.

“Since the late 1960s, the middle class has steadily been losing its share of national income—and it’s no coincidence that this trend line tracks very closely with that of declining union membership,” he said.

Then he turned to some of the measures he’d more successfully championed locally—full-day pre-Kindergarten chief among them. He said the expansion—which costs hundreds of millions in New York City alone—could be paid nationally for by enacting the so-called “Buffett Rule,” named for Omaha’s own billionaire Warren Buffett, which says no household making more than $1 million annually should pay a smaller share of income tax than those making under $250,000.

He also called for the passage of national legislation to provide paid sick leave, an expansion of which was one of the first major policies Mr. de Blasio enacted through the City Council.

In making his case, Mr. de Blasio sought to show these ideas weren’t just held by progressives, but by scions of business too. In addition to Mr. Buffett, the mayor also name-checked investor Nick Hanauer and Goldman Sachs CEO Lloyd Blankfein.

“I realize that some of these ideas might be dismissed as unrealistic, or called class warfare,” Mr. de Blasio allowed in his written remarks, saying the same had been said of prior efforts. “It’s never politically safe or easy to ask the most privileged Americans to pay more in taxes. But the math is clear. Rebuilding the middle class simply isn’t possible if those at the very top don’t pay their fair share.”

Tomorrow, Mr. de Blasio is set to speak at two events in Des Moines, Iowa: first he’ll give a speech at Drake University, and later he’ll offer remarks at a gathering of Progress Iowa. 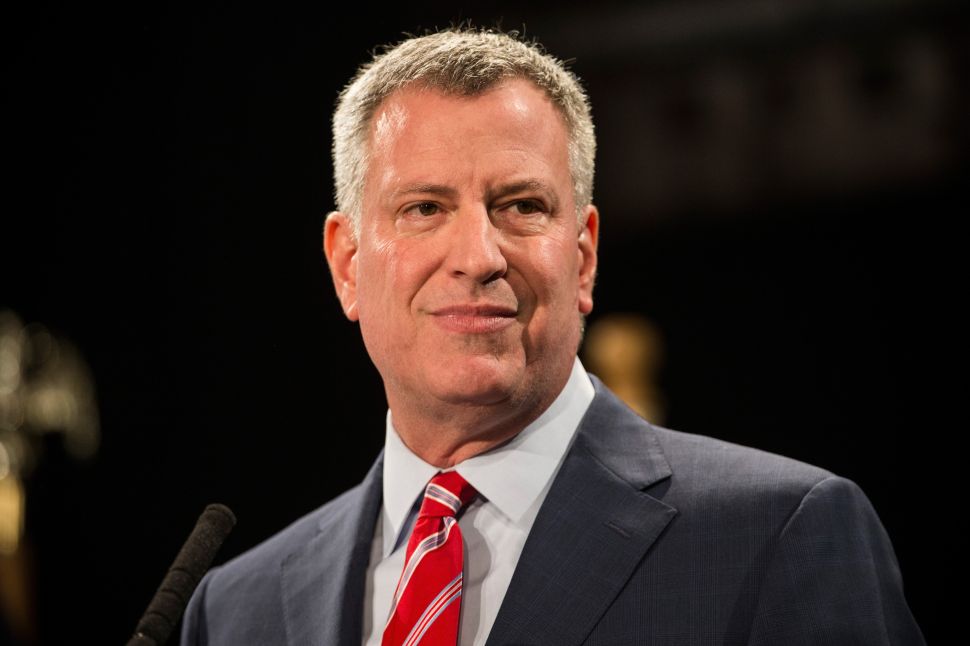