The last time I saw a band twice in a week was 1986. Hüsker Dü was and still is one of my favorite bands.

The first and only time I saw a band I’d never heard of twice in one week was when JD McPherson played New York City in February. If I estimated that I listened to this band’s recordings 10 times each between that Wednesday show at the Bowery and my trek from New Jersey to the Music Hall of Williamsburg for the Saturday show, you’d probably think I was exaggerating. So here are the numbers for that period, scrobbled from my Spotify playlist to Last.fm:

Who is this man from Broken Arrow, Okla., with his stylin’ band of 1950s-by-way-of-punk-rock crooners? A graying, debonair upright bass thumper who doubles as a music impresario in Chicago? A drummer so good he’s what Buddy Rich would have been had he been raised on both jazz and rock music? A smash-it-like-Jerry-Lee-Lewis piano player in a pristine baseball cap? A prodigy employing a litany of guitars, saxophones and other miscellaneous instruments?

JD McPherson doesn’t agree with the idea that he’s the sole savior of rock and roll, as many are calling him. But for someone whose debut album was recorded exclusively with analog equipment from the early 1950s and still hit No. 161 on the Billboard charts, and whose raucous shows are filled with people dancing like fools—from bobby sock-wearing aficionados to Brooklyn hipsters to Manhattan professionals breaking out of their cubes—the idea of this band reclaiming a paradise lost, one energized soul at a time, rings true.

Speaking about the birth of rock music, JD is characteristically astute—even philosophical: “It was something important that was happening. I see it being something worth preserving and talking about. I guess that’s part of the reason why I do this stuff. It was the first really cool idea: to give young people their own music. I think that’s a big deal,” McPherson told the Observer earlier this month.

Signs & Signifiers (the title reveals the musician’s post-modern studies culminating in an MFA degree), with its tour-de-force songwriting and stellar performances, was a enough of a big deal to earn JD McPherson accolades from Rolling Stone magazine and The Washington Post (“great musicians taking ownership of a sound, not just mimicking one”)—as well as a spot performing in the Rock and Roll Hall of Fame’s American Music Masters 2012 tribute concert honoring one of his heroes, Chuck Berry.

Let the Good Times Roll is both rooted in his previous album’s devotion to early rock and R&B but also a departure from it, one that upon close listening reveals the band’s deep well of inspirations, which include classic, punk and alternative rock genres.

“Gosh, we listened to so much David Bowie making this record. We’d play Primal Scream’s Screamadelica to listen to how they suddenly started making dance records, and then [producer Mark Neill] would play us Marilyn McCoo singing, ‘Marry Me, Bill,’ over and over again. I guess trying to re-wire our brains,” McPherson explains.

The album opens with a stunner—an upbeat romp propelled by electric bass and snare drum—that establishes JD’s vocal command and sets the tone with lyrics of loss and redemption:

“There’s a very dark side to the record,” McPherson says. “A lot of minor chords come in. Things took a couple of dark turns there over the past couple of years, and it influences the music.”

That dark turn is perhaps best displayed in lyrics of the tragic-turned-almost-comical “Bossy,” which features JD’s bluesy guitar playing and expert use of dynamics.

“Did you win a black ribbon for breaking hearts?/I spent a night beneath the Baron Forks Bridge ’cause you look so bossy/I saw the little secret on your vanity shelf/History is full of people like you.”

“It’s All Over But the Shouting” looks at how even when we know a relationship is bad, many of us keep going back for more because the underlying need remains.

And the song is just as rich musically: “I had this obsession with this piano part that’s just an octave played over, and the band moves around that,” JD says. “The root of that song is very New Orleans rhythm & blues, but with the treatment it gets, it almost starts to turn psychedelic.”

“Bridgebuilder” is a gorgeous song, a soul ballad that started as merely a line by JD’s friend Dan Auerbach of the Black Keys in Dan’s Nashville studio. And it’s the bridge between choruses that provides the song’s depth:

The additional seven songs on the LP continue to deliver on this promise. “It Shook Me Up” recites a list of unrequited desires (“Didn’t stick a piece of paper in the Wailing Wall”), none of which compares to the singer not getting time with his girl. “Shy Boy” is a slow and sparse tune—interludes of just snare, bass drum and vocal—born of a fall JD had while lugging his guitar amp: “This thing trips on the shortest of lips and when the winter wind is blowing cold/ I got a big old heart, one malicious remark /Just might hit me like a lightning bolt.”

And “You Must Have Met Little Caroline?” features JD’s and Doug Corcoran’s pulsing guitars and Raynier Jacildo’s tinkling keys—plus chillingly good ahh-ooh-ooh-wooh-ooh‘s from the whole band. It’s matched by a lyric recalling the fears of youth: “You know, you look like a child/ Crawling out into the hall/ When his folks are asleep with his hands along the wall.”

If there is any song on the album destined to send kids into the mosh pit, it’s “Head Over Heels.” The song portrays the author with his “head in the sky and a heart like a hurricane”—laid over a scorching riff inspired by Wilko Johnson, the guitarist for Dr. Feelgood and Ian Dury, whose fame also endures as Ser Ilyn Payne, the mute executioner in HBO’s Game of Thrones.

But the highest highlight of the record—and if there is any justice, a piece that will be heavily nominated for song of the year—is “Precious.” It’s a quiet, beautifully-sung tune infused with a gorgeous tremolo guitar sound that draws on both gospel/R&B musician Pops Staples and the Smiths’ Johnny Marr.

Who else but JD McPherson would avoid speaking the word “precious” but then transform the word into a battle cry?

So is “Let the Good Times Roll” merely an exciting revival album—a nod to the past by earnest devotees who also happen to be animated by The Clash, Bad Brains and The Pixies?

No. This record is a lot more than that. And perhaps in large part because of the serious thought the band puts into its efforts. “It’s weird,” says bass player and producer Jimmy Sutton. “When you grow up being a fan of ‘older’ music and all of a sudden you’re making a record, you’re thinking, are we just recreating something—a museum piece—or are we actually bringing it forward? It’s interesting, because if you make something today and it moves you today, in that sense it’s contemporary. I like that juxtaposition of classic and fresh, something old yet new that can actually take you somewhere now.”

John Packel is an entrepreneur, Bitcoin evangelist and drummer for the Editors NYC and the New Bloomingfields (NJ). 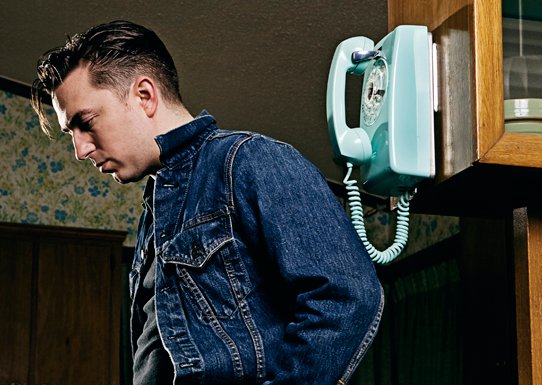