The Tibetans are said to believe that if you have a dark thought about someone and the thought does not directly strike that person it will travel around the world and hit you in the back of the head. On this theory, I have spent almost a decade not thinking dark thoughts about Judith Miller, the former New York Times reporter whose reporting about Saddam Hussein’s weapons of mass destruction was so useful in the Bush Administration’s campaign to sell an Iraq invasion.

But in the last few days, Miller has published a piece in the Wall Street Journal, “The Iraq War and Stubborn Myths, “ and The New York Times has reviewed her just-published book, The Story: A Reporter’s Journey, and I find myself thinking again about the 4,400 American dead, the hundreds of thousands of dead Iraqis, the untold wounded and maimed, the waste of $4 trillion, the connection between the shattering of Iraq and the rise of ISIS, and not least, the fact that no one involved in the greatest American disaster since Vietnam has been held remotely accountable. So when I read Judith Miller saying, yet again, that a journalist is only as good as her sources, I found my blood pressure redlining.

And when I read, in the pathologically cautious Times review by a non-Times employee, that “the agenda that comes through most strongly [in the book] is a desire to land on the front page,” I find myself transported to an earlier time, when citizens like me ate rage for breakfast. And then I recall an interaction I had with Ms. Miller in 2005 and the question that forced me to write about her.

For those who have had the good fortune to know nothing about Ms. Miller and her role as an enabler of the Bush Administration’s marketing of the Iraq invasion, here’s the briefest of primers.

Ms. Miller was a dogged reporter whose special knack was cultivating powerful men as sources. It’s tricky to write a sentence like that—you can’t help sounding like the pundits who call Hillary Clinton “aggressive.” But that was, in fact, how Ms. Miller operated; Nina Totenberg recalls Jordan’s King Hussein spotting Ms. Miller at a party and shouting “Juuuudy!” and Ms. Miller, in response, shouting “Kiiiiiing!”

Ms. Miller was one of the first journalists to be interested in bioterrorism. With her colleagues, she won a Pulitzer and authored a prescient book. But when Bush became President, her sources narrowed: Richard Perle, Paul Wolfowitz, Douglas Feith, Scooter Libby. If she didn’t have an agenda, they did. They have it still, and if anyone took them seriously, we would have already leveled Tehran.

In the run-up to the invasion of Iraq, government officials made remarkable claims. Dick Cheney insisted that 9/11 hijacker Mohammed Atta had met an Iraqi intelligence officer in Prague a few months before Atta flew a plane into the World Trade Center. (That meeting didn’t happen.) Condoleezza Rice also saw ties between Al Qaeda and Saddam Hussein. (Despite all evidence to the contrary, Rice was still saying this in 2006.) But the biggest whopper was Miller’s claim about Iraq’s intentions to develop weapons of mass destruction.

As an embedded reporter in Iraq, Miller saw buried ingredients for chemical weapons production. Well, she didn’t exactly see them. “Clad in nondescript clothes and a baseball cap,” she wrote in the Times, a former low-level Iraqi scientist known as Curveball “pointed to several spots in the sand where he said chemical precursors and other weapons material were buried.”

A few hours after that piece was published, Dick Cheney went on “Meet the Press” and quoted Miller. Others followed. Bob Simon of “60 Minutes” was quick to see through the kabuki. “You leak a story to the New York Times,” he told Franklin Foer of New York Magazine, “and the New York Times prints it, and then you go on the Sunday shows quoting the New York Times and corroborating your own information. You’ve got to hand it to them. That takes, as we say here in New York, chutzpah.”

It took two years for Miller to admit her reporting couldn’t be confirmed: “WMD—I got it totally wrong.” But it wasn’t her fault; she was deceived by her sources. Well, not even deceived. They meant well. They just got it wrong. It’s a defense we hear often. Indeed, it’s the single best argument against the passive voice: “Mistakes were made.”

By 2005, there were many factual takedowns of Miller’s reporting. Correctly, they focused on her false assumptions and inadequate reporting. I read none that linked her blunders to her character.

Then, about a week before Harriet Miers pulled the plug on her disastrous Supreme Court nomination, Judith Miller went to a dinner party.

There, I was told, she had a question: “Why is everyone being so mean to Harriet Miers?”

It was a memorable question. Ms. Miers was White House Council for President George W. Bush. She had not one credential that suggested she belonged on the Supreme Court. Her nomination was widely viewed as an expression of Mr. Bush’s contempt for the Court. Even Republicans declined to support her. And here was Judith Miller, as if she’d been on Mars for months, wondering why Washington was “mean” to Ms. Miers.

When I learned about Ms. Miller’s astonishing remark, I decided to write about her. And I wrote her to ask for confirmation.

Her response was brilliant weaselspeak.

“You’re probably going to hear a lot of things that I supposedly said that I don’t remember saying,” she told me, via email. “Like this. Don’t think I ever voiced an opinion on her, or asked the question you raise about Harriet Miers.”

I didn’t respond, but my source was Don Hewitt, the legendary creator and producer of “60 Minutes.” I knew Hewitt—he told me the Miller story while I was reporting a piece about him. A few years earlier, ”60 Minutes” had bought some research from me. He could be crusty. But he was reliable—he had the greatest track record in broadcast journalism.

So if Hewitt said Ms. Miller asked that question, I’m siding with Hewitt. As for Ms. Miller’s slippery non-denial, it speaks to character—she’s not a good reporter and she’s not a good source. Now embedded at Fox News, she’s finally found her true home. 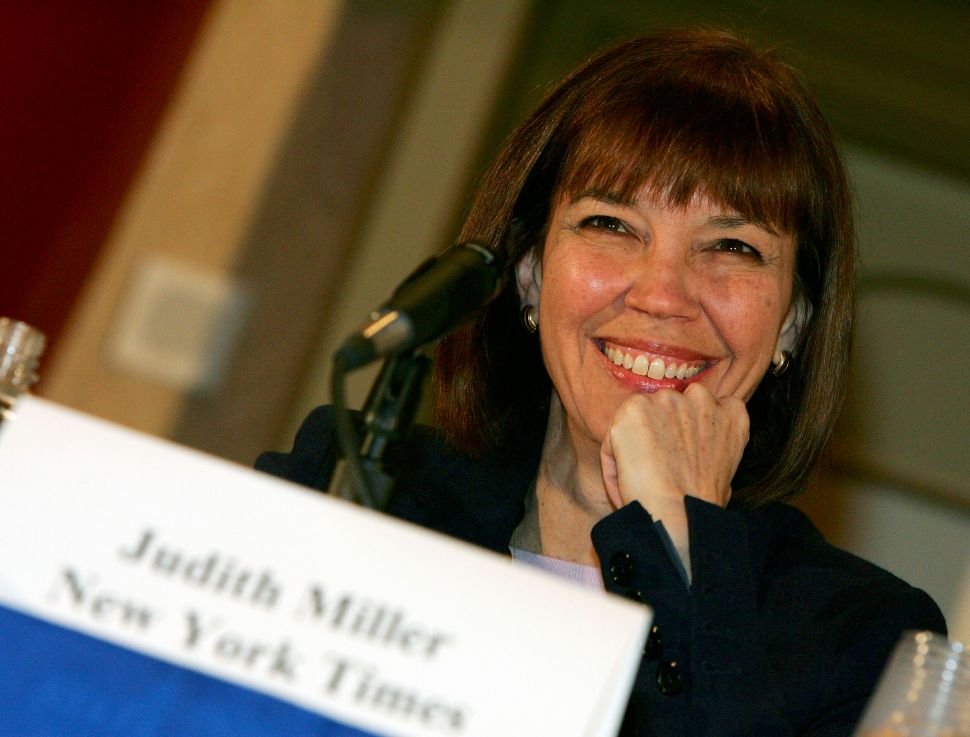