When the supposedly highly regarded news magazine show America’s Worst Crimes presents the horrific tale of a young woman’s gang rape at a fraternity on the campus of Hudson University, everyone is watching; including Sergeant Benson and her bosses. Said bosses immediate decide that the SVU team needs to take a proactive stance by finding the victim, identified only as “Jane” and getting the real story about her assault.

Footwork ensues and after some dead ends by the detectives, Jane outs herself at a rally. Jane, who’s real name is Heather, along with her trusty advisor, Professor Jessica Dillon, reluctantly come to the precinct to describe what exactly happened to Heather in that fraternity house.

Heather details how she innocently went on a date with a hockey player, willingly went back to his place where he promptly shoved her into a darkened room where she was gang raped by four assailants.

While the detectives work to gather more evidence, consulting with ADA Barba throughout, there are more rallies and talk show appearances by Heather amid an ever-heightening media frenzy. During each of Heather’s public speeches her story seems to constantly change, a fact which rightfully agitates all of the law enforcement folks trying to help her.

After arresting three of the four young men (one was out of the country), the whole case rapidly begins to fall apart. Barba realizes that Professor Collins was a bit too zealous about Heather’s case, manipulating the girl, and her story, a bit too much, in the hope that Heather would become ‘the face of a movement.’

Heather herself finally admits that she’s in fact extremely confused about what really happened that night and that she got carried away with the fury of media and her story took on a life of its own.

When she’s alone with Sergeant Benson, she begins to realize that she drank too much and did have consensual sex with her original date.  She also remembers that when they were finished she passed out, but upon regaining consciousness she discovered another frat member penetrating her. When she is adamant that he raped her, Benson doesn’t disagree, but explains that after everything that’s happened in this case, a jury will have plenty of reasonable doubt and it’s unlikely that any kind of conviction could possibly be secured. Even though it’s clear that one of the young men is absolutely guilty of rape, Barba, understandably reluctantly, drops all charges against the four fraternity members.

For those not in the know, this episode is based on an ongoing investigation incited by an article that ran in Rolling Stone in November 2014 about a fraternity gang rape at the University of Virginia. Almost as soon as the piece was released, the integrity of both the victim and the publication came under fire.

Rather quickly, Rolling Stone Managing Editor Will Dana admitted that the publication had made errors in judgment in their investigation and reporting of the alleged incident.

As a result of the article, the Charlottesville police department conducted its own inquiry and last week the results of that probe were released.

At a press conference, it was announced that “no substantive basis” was found for the claim by the student, known as “Jackie,” that she was raped by seven men at a fraternity party as a UVA freshman in September 2012.

Charlottesville Police Chief Timothy J. Longo stressed that the department’s conclusion “doesn’t mean something terrible didn’t happen to Jackie” and that the investigation is not closed, but only suspended until new evidence emerges.

In SVU’s fictionalized account of the incident, Rolling Stone’s journalist shortcomings were highlighted well, they fully vet the victims account of what happened, nor did they reach out to anyone at the university or in law enforcement about how to present the facts, or lack there of. In summary, they only showed one angle of the story, claiming that protecting the victim’s identity prevented them from discussing the case with any other parties that may or may not have been involved. This is definitely not how investigative journalism is supposed to work.

Another factor that makes this specific narrative so compelling is that Professor Dillon and Heather weren’t trying to be malicious; they claim they were trying to get the message out about the prevalence of on campus assault. Unfortunately, they did it in such a manner that it ended in utter catastrophe. As Sergeant Benson said, ‘They thought this would be the case that changed rape culture, and it did, it set the clock back thirty years.”

By this she means that many victims are already reluctant to disclose assaults and that what’s transpired here may push them further away from doing so, and that this fuels those who express growing skepticism about the real number of on-campus incidents.

The episode made big and rather accurate statements about the current status of the reporting process and handling of on campus assaults with the main point being that this is a widespread problem that has historically lacked much needed attention to stimulate change.  As Heather mentioned, she became ‘the face of a movement’ and the stress of that role overwhelmed her, for all the wrong reasons. The way this story unfolded, one could come to the conclusion that clearly no one would willingly want be the face of this movement.

Two rape survivors and activists from the University of North Carolina at Chapel Hill, Andrea Pino and Annie Clark, are the focus of a new documentary about the topic entitled The Hunting Ground. The two women, facing narrow-minded administrators, and bureaucratic obstruction, launched the initial efforts that have led to over 80 educational institutions facing Title IX investigations that are now forcing college and university officials to address sexual assault more directly.

One of the most disturbing parts of the episode is the realization that because of all of the changes and ambiguity in Heather’s story a young man did actually get away with raping her with no conviction and seemingly few repercussions for his actions.

That, in and of itself, makes this episode more than just another story about rape. It makes it a true horror story. 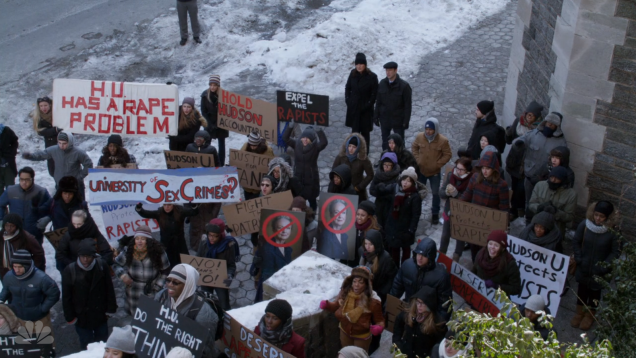