In this installment of the series, SVU tackled a topic that might have seemed a little out of their wheelhouse as they took on a group of anti-vaxxers. This isn’t a term that one would think would show up on a crime procedural drama but yet, here it is.

For those not in the know, anti-vaxxers is the nomenclature used to identify parents who choose not to vaccinate their children, for whatever reason.

Now, what if a parent decided not to vaccinate her child for measles, based on rumors that the vaccine causes autism, and that child gets the disease and passes it to a 1-year-old, who is too young for the vaccine. And what if that baby dies?

This is hypothetical case study in a provocative paper in the Journal of Law, Medicine and Ethics that explores whether there’s a case for holding people legally accountable for the damage they cause by not vaccinating their children. “One can make a legitimate, state-sanctioned choice not to vaccinate,” the bioethicist Arthur L. Caplan and his co-authors write, “but that does not protect the person making that choice against the consequences of that choice for others.” Since epidemiologists today can reliably trace the source of a viral infection, the authors argue, a parent who decides not to vaccinate his or her child and thus endangers another child is clearly at fault and can be charged with crimes ranging from reckless endangerment to criminally negligent homicide.

That’s the sad scenario, more or less, that’s played out in this episode.

What started out as a situation involving teens, alcohol, sex and selfies at a party quickly spiraled out of control when photos and videos from the gathering circulated, not just among the participants, but went viral.

This was another one of those times when it’s clear that the law hasn’t quite caught up to technology, or rather, it seems there’s no absolute definition of what constitutes criminal activity when it comes to the use of technology to disseminate images. There are laws in place, but it seems like those become outdated quickly with the advent of new methods of sharing and with these vague guidelines the ability to prosecute someone is not always possible. The main thing in this scenario is that once images are uploaded and circulated, they can end up anywhere and can continue to be shared for years to come.

How can anyone with a cellphone not know this? Oh yeah, they’re teenagers who think that they’re invincible. Unfortunately, it appears that many of them have parents who are more concerned about their reputation and jail time than about their teens actual well-being, mentally and physically. To that end, why wouldn’t you sit your kid down the minute you give him/her a cell and discuss the correct and incorrect usage of the device? That seems like a no-brainer, but yet simply giving out these instructions has been clearly ignored by many.

But I digress….back to the episode.

When a measles outbreak can be traced back to the teen party, the detectives discover that the cause of the near epidemic is a bunch of moms who chose not to immunize their kids and then falsified their medical records. (In some states, New York included, parents must provide vaccination records in order to enroll their child in school.)

What all of this leads to is some tense courtroom exchanges involving Barba, an Anti-Vaxxer Queen Bee (AVQB) and her attorney as they trade speeches about medical facts, the supposed link between vaccines and autism, and the right to choose whether or not to immunize your child.

The AVQB insists that she should have the choice to decide what’s best for her child to which Barba masterful points out that by expressly choosing not to vaccinate her child, she’s taking that choice away from other parents, so the decision doesn’t just affect the woman and her family, it affects everyone that she comes into contact with, and even a lot of folks that she doesn’t.

In the end, the jury finds the woman guilty of a lesser charge than the one Barba was hoping for, but she does earn some jail time and it’s a safe bet she’ll pick up a few unwanted germs in the slammer, so that seems like a pretty just punishment – for her. Unfortunately, the punishment for others continues as her link in the disease-spreading chain has already been established and done its damage.

As an NYPD Sergeant, Benson wants to see justice prevail, but as a mom, Olivia is rightfully just all out pissed that someone put her son’s life in danger as Noah contracts the virus and is hospitalized. When she’s on the stand, the defense attorney gives Liv a hard time about waiting an extra few months after his first birthday to immunize her son, trying to show that even she exercised her power of choice in delaying getting Noah his vaccination.

Part of me couldn’t help wondering why Liv couldn’t retort with the fact that her son wasn’t in daycare and that she didn’t break the law by falsifying his immunization records, while staring down that annoying holistic lady. But, Olivia did get the chance to get in AVQB’s face when the woman approached Liv outside of the courtroom, trying to explain her thoughts on the matter. Liv asked her to step off but the woman was clearly clueless about boundaries (among other things.)

Many SVU fans noted that this topic has been covered before, (Season 10’s “Selfish”) but that was six years ago and the fact that this subject matter warrants another episode only goes to show that it’s still an issue that needs discussion.

And, as personal situations change, so do thoughts and emotions concerning the matter. Now that Olivia is a mother, her feelings about this issue are surely heightened given the fact that she now she has a child who is directly affected by the actions of the anti-vexed clan.

This also holds true for Amaro as he mentioned that he reached out to the mothers of his two children questioning their immunization records. The fact that he had to ask for this information was a bit unsettling to him, resulting in him making some self-assessments about his involvement in his kid’s lives.  To be fair to Amaro, maybe this is something that today’s fathers know, given all of the controversy around the subject, but I can tell you for sure that my father had no idea about my immunization records, nor did my mother really. I mean, I was immunized, but back in the day (ok, a few decades ago) every child was immunized so it wasn’t a concern.  My parents and I only talked about this because when I was in college there was an outbreak of measles on my campus. We were immediately told to get our records and present them to the university’s’ health care center. When my mom was able to produce the documents and I showed them to officials, I was told that I would have to be re-immunized. Apparently, that was a window of a few years, some 18 to 20 years earlier, that the CDC had just discovered during which the vaccine was not as effective for some reason. This had possibly led to the rash of victims at my school.  Thankfully, the outbreak wasn’t severe, but for several months there were students who did contract the disease and it certainly heightened awareness about immunizations.

Overall, the episode was on point, effectively presenting both sides of the issue, and it was a nice change that no one was violently assaulted and none of the ‘victims’ from the teen party seemed particularly traumatized. The only ones who were truly distressed in this episode were Olivia and Noah, and understandably so.

It was also quite pleasant to see the whole SVU gang back working together in this episode – Fin making his usual off-the-cuff (albeit always true!) statements and also always being the calmest person in any hectic situation, Rollins and Amaro working as a team, with him sharing his personal problems with her, and Carisi, the who’s now so embedded that it’s hard to remember a time without him around. And, as we seem to do every week when it comes to Carisi, let’s take a moment to evaluate the evolution of his skills. In a quick scene, as he comes upon Amaro and Rollins deep in discussion, Carisi shows that may be more astute than the others give him credit for as he clearly knows there’s something going on with these two, He may not know exactly what it is, but he knows there’s something there. That Carisi’s come a long way, hasn’t he?

Shout outs go to Missi Pyle, Susie Essman, and director Holly Dale. Pyle is excellent in every guest role that she takes on and that’s certainly true here. Essman is the perfect cohort/foil for Barba and I’m sure I’m not alone in hoping that we see her again, and again, and again. As for Dale, her work is always stellar, but here she shows why she’s top notch. There are no chases, no one held at gunpoint, not really much action (except Noah’s rush to the hospital) and yet she constructed every shot in a manner that created the utmost tension in every single scene.

Another All-Star collaboration in the books for SVU. 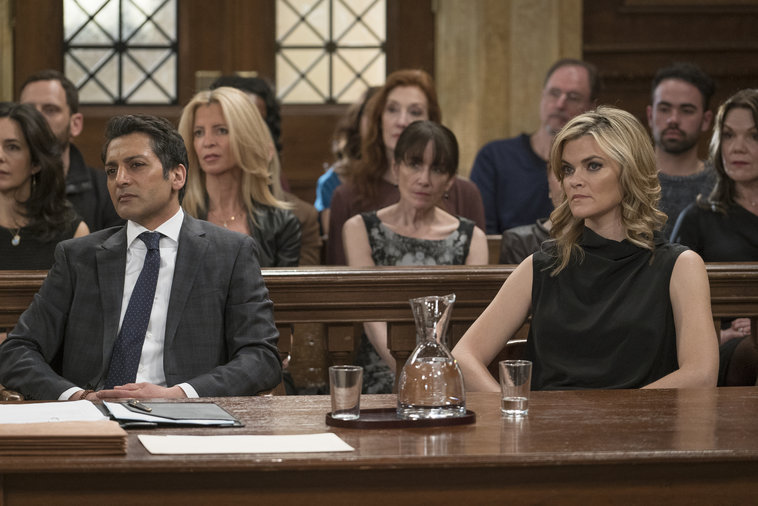