Remember back in the day when both daytime and nighttime television featured soaps? There was Another World, Santa Barbara, Passions. All My Children and One Life to Live in the afternoon hours and Dallas, Falcon Crest and Knots Landing at night.

The medium has dwindled to just a handful of daytime entries and just a small percentage of true ‘soap’ type shows dot the evening hours.

What’s an actress who specializes in this type of work to do now?

Pop TV has the answer with their new docuseries, Queens of Drama. In the ten episode series, six former daytime and primetime soap stars take control of their careers and attempt to create their next star vehicle.

Queens of Drama follows the cast as they work in front of and behind the cameras to develop, pitch and produce a new steamy serialized drama–with the goal of landing a pilot deal by the end of the season.

“The timing is absolutely right for this because if you look at what’s been going on in the space in TV right now, a lot of the soap operas are going away. But at the same time, those fans are so rabid and so ready for more content,” says Executive Producer Adam Reed. “So we kind of came up with the idea that ‘hey, maybe there’s a way to find a group of soap opera actresses both daytime and nighttime, some of who know each other and some who don’t, and see if they can get something off the ground.’ “

When Reed and his team started putting the word out about the project, they were surprised by the response from within the soap community. “What we started to learn was that all of these actresses were seeing and feeling the same thing. They see all these daytime and nighttime soaps going away, but they believe that there’s a true market for it. Who better to fill it than these woman, who’ve been successful in the genre for such a long period of time? Then the question became, ‘can they come together and create a soap that they are not only in but they also produce?’”

The series may currently feature the ladies of the genre, and while it’s not without some testosterone, highlighting the women was a conscious choice due to a few evident factors. “There are a lot of cameos throughout the season of male soap stars and male actors and friends of these ladies but what kind of become cleat when we started working on this is that there was more of a want and need for this from a female perspective than a male perspective.

So, it’s not to say that in future seasons we may not add a male to the team, but for now – it’s all about the ladies.”

The clear goal of the season is see if this conglomeration of women can successfully get a show on the air, but whether that goal comes to fruition isn’t something Reed will give away at this point.

“We’re not only producing the unscripted reality show, we’re also producing this soap opera that these ladies are putting together,” explains Reed. “What we love about it is that viewers are truly treated to a very real behind-the-scenes look at the process – all of the ups and downs and ins and outs of actually creating something and then struggling to get it on the air.”

Reed and his team may have thought they were simply signing on to work with a half dozen actresses but what the women actually brought to the project was more than just their on-screen experience. “We all knew them as actresses and we’re fans of them in that role but as they say in the show ‘you know, you get known for one thing.’ We were just blown away in every meeting we had that they would come in with such great ideas and new ways to go about it. I think there was an assumption that ‘we have a bunch of actresses here, are they really going to be able to do anything other than that?’ The great surprise is they were able to do almost all of it on their own.”

The word drama in the title isn’t without merit, admits Reed as he says, “Well, it was obvious from day one that every one of the ladies had their own ideas about what type of show they wanted to do. And, each one of them has a very strong personality and very strong opinions as well, but that’s what makes it great because they all come from the same world but they’re all very different.”

Some viewers might be turned off upon hearing that there are plenty of squabbles among the ladies throughout the series, but Reed assures that this isn’t just another show with women constantly arguing. “What’s great about this show is there is as much camaraderie as there is conflict and the women, although they may argue, have a real affinity and respect for each other. I think a lot of unscripted shows you have a bunch of women yelling and just being catty towards each other. What’s great about this is these women have come together for a common goal, not just for parties and dinners and that kind of stuff. That common goal is to serve an underserved market and create a television show that’s produced and stars these actresses and I think that’s refreshing.”

Reed assures that there are plenty of surprises in store for viewers this season on Queens of Drama. “Believe me, there’s a lot of stuff that no one will see coming. There are some very unlikely alliances that will form and  I can tell you that there’s a scene in the finale episode that no one will be expecting. That scene is dramatic, powerful, and very emotional. If viewers stay tuned to the end, you’ll absolutely understand what I’m talking about.”

Tension, drama, and disagreements – all in the course of women making a television show. Sound like just what soap fans are looking for. The question is, will there be any wine-tossing or face-slapping? Fans will just have to tune in and find out.

Queens of Drama airs Wednesdays at 8p on POP TV. 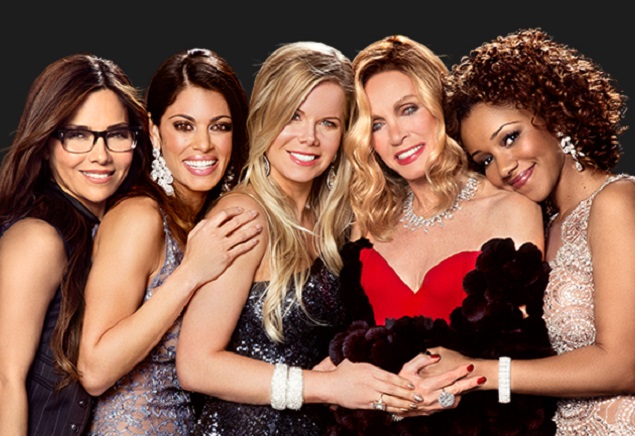