A powerful lesson in leadership: take responsibility for your actions as well as your words… especially when things go wrong.

The riots on the streets of Baltimore are a tragedy.  Businesses are being destroyed. Police officers attacked.  So called “protesters” are acting like thugs on the street engaging in lawless looting, burning, and pillaging of their community. The reasons for what is happening in Baltimore are complex.  Yet, there is a clear lesson in leadership in all of this.  Not only did it take way too long for the leaders of Baltimore to reach out to the state and, ultimately, the federal government for help, but they clearly were not prepared for what happened immediately following the funeral of Freddie Gray. Further, the Baltimore Mayor, Stephanie Rawlings-Blake, blew it when she spoke in public over the weekend and uttered these shocking words – “It’s a very delicate balancing act because while we tried to make sure that they [protesters] were protected from the cars and the other things that were going on, we also gave those who wished to destroy space to do that as well.” This clearly sent the wrong message to those looking to cause harm and do damage in Baltimore. Talk about lessons in leadership, those in positions of authority must chose their words in a crisis and under pressure very carefully.  The mayor said absolutely the wrong thing, sent the wrong message.  When challenged about her own statement she pushed back hard in a very defensive tone, saying “I never said, nor would I ever say that we are giving people space to destroy our city. So my words should not be twisted.”

But that excuse doesn’t cut it for a real leader.  She said it, she has to own it.  The mayor is not responsible for the 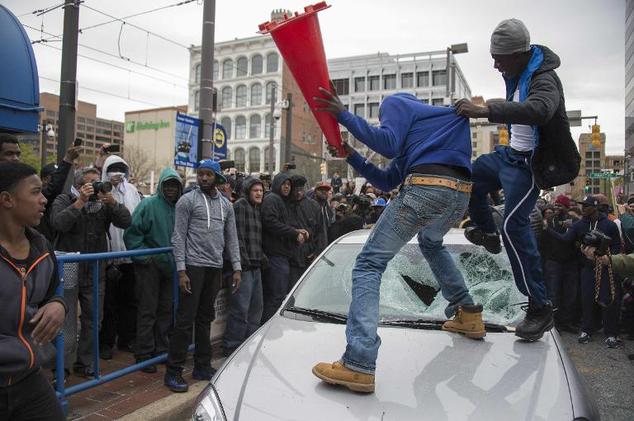 lawlessness on the streets of Baltimore but she clearly contributed to it by her careless public comment.  By not taking responsibility for her words she demonstrates exceptionally poor leadership and only compounded a bad situation.

As leaders we all make mistakes, especially under heavy pressure.  But when we do, and things go wrong, we have only one choice… to step up and be the responsible adult and say, “I was wrong for saying what I did.  I apologize. What I should have said was…” By making excuses and playing the victim, Mayor Rawlings-Blake sent the wrong message again to those in Baltimore and around the country looking to make excuses for the criminals – no matter how young they are – wreaking havoc on the streets of Baltimore.

Now that is a lesson in leadership.

What do you think? Am I being fair or unfair to the Mayor of Baltimore?  Or do you think she is right in saying the media twisted her words?  Write to me at sadubato@aol.com

“Lessons in Leadership” is an initiative created by Steve Adubato, PhD to provide concrete tips, tools and advice for today’s real leadership challenges. Through columns, videos, seminars, and his soon-to-be-published book, “Lessons in Leadership,” Steve shares practical solutions that have been honed from his 15 years of experience as an executive coach in leadership development and communication; his countless seminars conducted on leadership; his experience teaching at business schools at NYU, Rutgers and NJIT; and the number of interviews conducted with CEO’s and other business executives.

Steve Adubato, PhD is a broadcaster, author, and motivational speaker.  He is a distinguished visiting university professor at New York University and NJIT, Emmy Award–winning anchor for Thirteen/WNET (PBS) and NJTV (PBS), and syndicated columnist.  Steve has appeared on the Today show, CNN, Fox, AM970 and NPR as a media and political analyst.  He is the author of Make the Connection, What Were They Thinking?, Speak from the Heart and You Are the Brand.