In late March I had an arthroscopic procedure on my right knee to remove my torn meniscus. As part of my recovery ‘Get Well Soon’ package, the good folks at St. Barnabas Hospital gave me a 21-minute DVD video entitled “How To Use Your Crutches”. Thanks to the DVD, my “crutch” skills are so on point, that I’ve added them to my LinkedIn profile. Feel free to endorse away.

I’ve definitely put my new found skills to work here in New York City. In a city where taxis honk before the light turns green and scheduling a date with someone is as Aziz Ansari said “…like you’re a secretary for a really shoddy organization, scheduling the dumbest sh*t, with the flakiest people ever,” I couldn’t afford or hope to go slow. I have to hurry up to be late.

The day I went into surgery, I told myself I would turn this event into the best thing to ever happen to me. It’s still too early to tell, but the past few weeks have given me practical lessons in time management, humility and gratefulness.

I moved to New York City from California a bit over a year ago. I was overwhelmed by the pace of the city. It seemed like if you weren’t moving quickly then you weren’t moving at all. Even on the weekend, when I had no where to be, I found myself rushing from one task to the next, never fully present and never fully committed. I would feel guilty if any part of my day wasn’t allocated to something productive. I had come to be busy…for the sake of being busy. My days had come to resemble a guitar with tightly wound strings of commitments and appointments. It’s as though one loose string could derail my whole day.

But now, I’m on crutches. I can’t hurry around. And it’s been a really nice change of pace.

A few days after my surgery, I ventured out to the Grey Dog near my apartment in the West Village. Until then, I had not hobbled further than down my street, so this walk would be quite the undertaking. Unlike previous trips to the Grey Dog, I couldn’t hurry or put on my headphones (have to be more alert since I’m moving quite slow). As such I was very much free of distraction and only thinking of the step in front of me.

It was quite by accident but I found myself being more mindful and in the moment. As I hobbled down my neighborhood, things began to look…different. The neighborhood I had lived in for over a year didn’t look familiar.  And I realized that it was because I had only known the West Village through a hurried and unfocused lens. But walking at a slower pace, I began to take note of the buildings, the cracks in the sidewalks, the conversations from the street vendors. In short, I felt the city’s heartbeat for probably the first time since the excitement of a big move waned months ago.

This was both exhilarating, as I was discovering my surroundings for a second time, and sobering as I thought to myself “what else have I missed out on by always being in a rush?”

You know what else takes a really long time when you are on crutches? Getting in a car. My days of “Bad Boy-ing” out of Kole’s sunroof are momentarily on hold. Because of the injury, I’ve had to rely heavily on Uber these past few weeks (I must say, all my drivers have been very helpful and accommodating, thank you.) During a trip, I had a diva moment and began venting to one of my drivers, complaining about my knee, recovery period and lost time on the soccer field. To remind me of a familiar concept, he introduced me to a new word, “inshallah”.

“Inshallah” is the Arabic phrase for “God willing”. The Qur’an teaches that one should never describe an event in the future without prefacing it with “God willing.” The Stoics of Ancient Rome, like Cato, Marcus Aurelius and Seneca would probably say something like “fate permitting.” Although it’s known by different phrases, the idea remains the same: most things are out of your control and in the hands of God, the universe, nature or whatever name you have (if at all) for a higher being, and I’ve actually been familiar with the idea since I was in grade school.

As the son of Mexican immigrants, I grew up in a Catholic household. My mom would always say “si dios quiere”, “God Permitting” before any event that could happen. As we caught up over the Easter holiday she reminded me that God-Willing, I’ll get better. According to her, all I had to do was follow the Doctor’s instructions and be home every night by 9pm (yea…about that mom…). The rest was as she, my Uber driver and countless others would say, was in God’s hands.

Like most people, I’ve dealt with my fair share of challenges. But this is the first time that I’ve dealt with a prolonged injury. It’s easy to tell others that “God Willing, you will get better.” But when it happens to you, your selfish ego thinks it can escape the bindings of fate and you start believing that you have more control over the situation than you really do.

What I’m going through is nothing. It’s funny that it took an Uber driver, a few dead philosophers and my madre to remind me that I’m not in control and to remain humble. In reality, things could have been much worse. I could have torn my ACL, my PCL or God forbid, been staring at a life threatening disease.

Marcus Aurelius said that, “…when anything tempts you to feel bitter: not “This is misfortune,” but “To bear this worthily is good fortune.”

So, instead of rueing the lost gym time, recovery period or the (manageable) pain, all trivial really, I should be grateful that I have the tools and resources to face this setback. (After all, isn’t this why I study Stoicism? To live a better day-to-day and make sense of the world around me?)

Being on crutches has it’s benefits. They make great airguns, they’re awesome for retrieving items from across the room and they’re great conversation starters with girls. It’s what you make of it. And while these things are pretty cool, the biggest upside to my injury has been that I’ve slowed down. And in the process, I’ve regained some humility and a renewed sense of appreciation for what’s been given to me. The trick now is to remember these things without needing another injury. 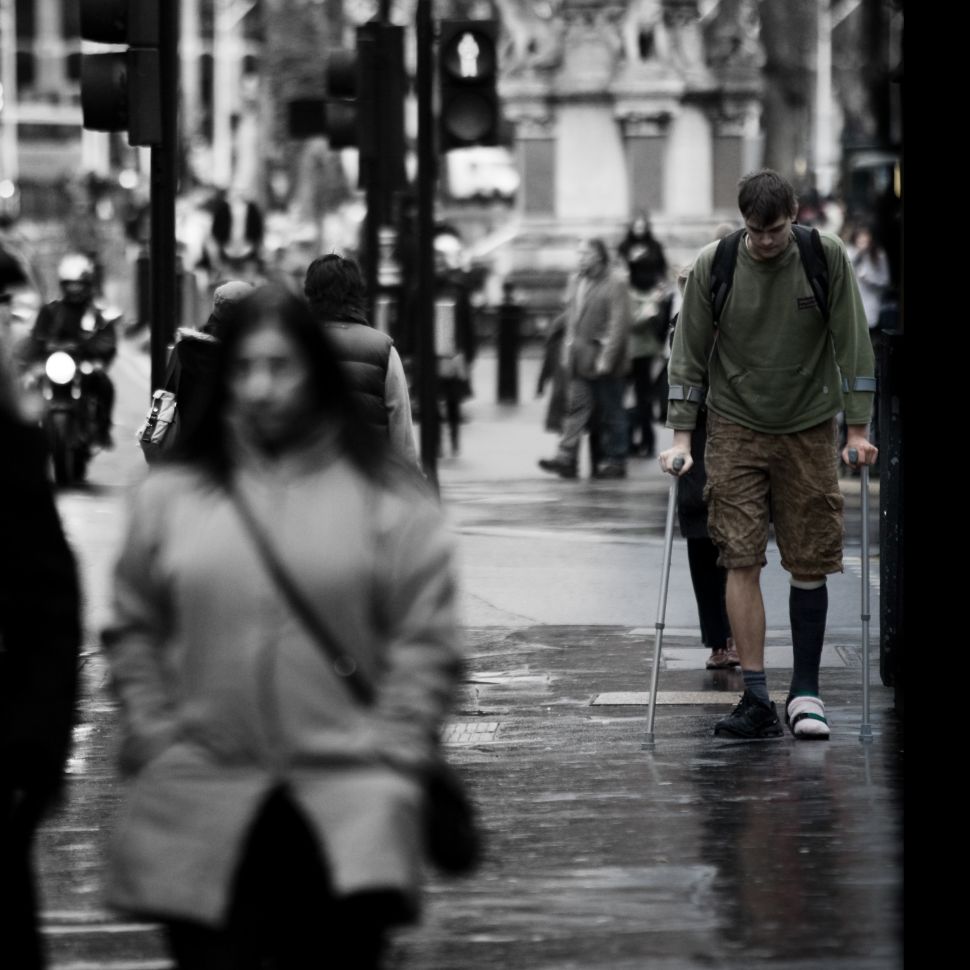