Candice Madey, owner and director of the Lower East Side cutting-edge art gallery On Stellar Rays, is having a good time, and doing good business, in Brussels this week, to her delight.

“For a young gallery, Art Brussels [which ends today] has been an amazing point of entry to the European market,” said the exhibitor at the tony fair event. “The benefit-cost ratio is quite high relative to other European fairs; Brussels is not an expensive city, but at the same time, it has a lot of very interesting collectors.”

Madey was participating in the fair for the third time. Of particular interest in Madey’s deceptively simple–yet quietly strong–booth were the mesmeric minimalist brass and gold works by Greek artist Athanasios Argianas, priced between $15,000-$18,000. Madey also had a row of John Houck photographs on display, all of which sold rapidly.

So the dealer was more than happy to award the fair some hefty praise, an attitude that seemed prevalent on an unusually sunny morning in the Belgian capital.

Veteran New York gallerist Augusto Arbizo of Eleven Rivington, who was presenting a gorgeous solo booth of Jackie Saccoccio paintings (almost all of which sold at around $40,000) echoed a similar sentiment.

“There’s never the kind of frenzy you find in Miami,” he said, “but Brussels has a culture of collecting art that produces a very educated audience, so it has become a very enjoyable trip for us.” Arbizo should know. Participating for the fifth straight year, he is now on the selection committee for Art Brussels and was a major factor in winning over an impressive new group of NYC galleries. “I told people that it’s a great fair,” he said humbly, “but I think my repeat attendance speaks for itself.”

The booths were impressive, regardless of their country of origin. As you entered the Brussels Expo, the first standout, just steps from the entrance, was the gallery of Parisian grande dame Nathalie Obadia.

Being one of the more expressionist-leaning galleries at Art Brussels, Obadia had no problem shining in an art world milieu that ofttimes feels like a cult of youthfully undercooked mundanity. The gallery brought a heady blend of old and young, from an extraordinary ‘piss christ’ photograph by New York’s legendary demagogue Andres Serrano (which quickly sold for $85,000) to a beautiful and au courant laminate and plywood piece by up-and-coming New York-based artist Michael Delucia (another fast sale at $15,000).

Also on hand was a festooned shelving unit–replete with neon, spray paint, microphones, and other electrical equipment–by the young flemish artist Joris van de Moortel which sold for a tad over $16,000. Joris is an artist/musician hybrid who also has a gripping solo effort on view at Obadia’s Belgian branch.

A few yards away, both press and collectors alike were going gaga over a seven-foot stainless steel cutout of a cocktail shaker by Mobile, Alabama native Kathryn Andrews. The pristine work, which was centrally positioned in Barbara Gladstone’s booth, left fans eager to see more from this newcomer.

Nearby, a dealer who splits time between Paris and Brussels, Michel Rien, shone with a pair of floor sculptures by NYC artists Jimmie Durham and Abigail DeVille. A young New Yorker gaining tons of momentum, DeVille was selected for the distinguished Studio Museum residency over a year ago and has had eyes trained on her ever since. Her sculpture consisted of a photo-laden and burnt piece of plywood that hung about a foot above an odd briefcase-sized portable TV (an awkward moment along the glorious march of 20th century technology.) The photos, which are of African Americans from past eras, peek through the burn marks and in tandem with the lowly piece of abandoned tech, the work takes on a powerful aura of anger, abandonment and then finally, decay.

Durham’s piece was an apt metaphor on many levels: a greco-roman sculptural head, liberated from an absent body, laying wearily amongst the shards of a gilded urn it likely smashed. Prideful fighting can hurt everyone involved, but courteous collaboration–which you see in ample amounts at Art Brussels–offers the opposite effect. 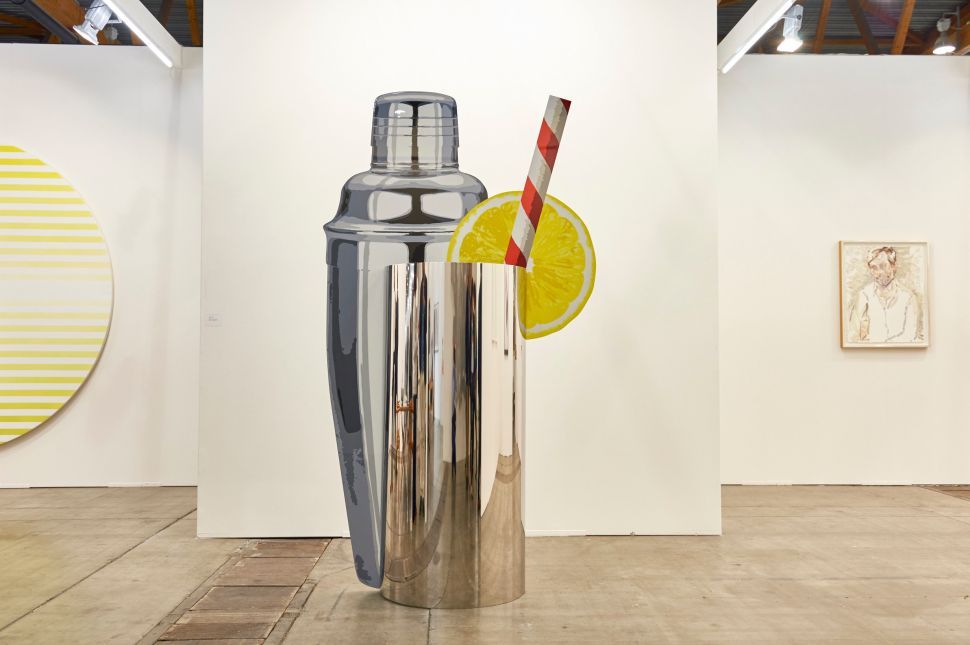