Welcome to 1970, the year where Ted and Roger grow massive mustaches, a newly single Don gropes every warm body in Manhattan and Hot Stan Rizzo effectively enters his latter day Jim Morrison period with the added bonus of a jaunty neckerchief.

“Severance” opens with Don seductively giving instruction to a model auditioning for a chinchilla coat ad, who is subtly groping herself and dropping the coat to reveal a nude bodysuit., per Don’s cues.  The dialogue sounds eerily like one of David Duchovny’s old voiceovers for Showtime’s softcore series “The Red Shoe Diaries.” Plus, the irony of Don smoking near a garment he impresses on the model as costing 15,000 dollars certainly wasn’t lost on me. The whole thing is so ridiculously over the top and uncomfortable that the reveal of Ted Chaough, Pete Campbell and a few other suits on the couch comes as a welcome relief.

Amid the gratuitous casting sessions, Don is greeted by the apparition of Rachel Katz, formerly Mencken, his affair from season one. She seductively strides into the room wearing the fur coat and ominously reprimands Don for missing his flight. Given that Joan and Peggy are currently wrestling with a pantyhose account and Rachel was the scion of a department store empire that was built up from a hosiery store, it’s not surprising that she would resurface, especially with this show’s track record of spontaneously  resurrecting old characters. Plus, I can’t be the only one who considered her the far and away favorite of all the Don Draper other women. Aside from the fact that Rachel was a successful business woman in a social climate that frowned on independent and assertive woman, and especially Jewish women, she was also probably the only one of Don’s mistresses who really challenged him, with the possible exception of Dr. Faye. However, unlike Dr. Faye, Rachel left the affair on her terms when she called out Don’s cowardice upon asking her to drop her life and help him abandon his family and  run away with him to California. Don was clearly shaken when he ran into Rachel and her husband Tilden Katz in a restaurant in season two, and perhaps as an act of wish fulfillment, gave his name as “Tilden Katz” to bouncer of the seedy underground club he visited with Roger during Freddy Rumsen’s send off after the notorious drunken carpet wizz.

Given the lingering theme of the opening song “Is That All There Is?” the fact that Don is waist deep in party girls, big-haired stewardesses and assorted flings isn’t keeping him from wondering what could have been with the affair that we can all agree is Don’s “one that got away.” Unfortunately, according to some folklore, seeing a person’s doppelgänger is typically consider a harbinger of their death and Don tasks Peggy with tracking Rachel down for help on the Topaz account, we learn that Rachel had recently passed away, of leukemia.

At this point, Don should probably know that seeing doppelgangers of important women in his life means that they have passed away. After all, he was greeted by a vision of Anna Draper right before receiving news of her passing in “The Suitcase.” And then there was the time he tried to strangle a vision of a past affair, played by Twin Peaks’ Mädchen Amick, in the “Mystery Date” episode of season 5. The other woman Don seemed to consistently envision  was his abusive stepmother, signalling that a daydream containing a woman from his past are typically calling back to the darkest, most repressed corners of Don’s soul.  The upbeat hallucinations with singing and choreography are reserved for when  the Bert Coopers of the world bite the dust.

When Don revisits that particular  road not taken, he finds himself receiving a frosty reception from Rachel’s sister at the shiva who makes it clear to him that Rachel got everything she ever wanted from life (family, kids, etc.) that Don couldn’t provide while he was married to someone else.

Perhaps Don saw a bit of Rachel in Di, the dour diner waitress that Roger and his meaty mustache harassed while entertaining his small harem of female companions on a night out with Don. After Roger, flush with the McCann-Erickson buyout windfall, plunked down a 100 dollar bill as an apology for dehumanizing her, Di saw it as a downpayment for the joyless alleyway fuck she engaged in with Don.  Being in the minority of women not charmed by the dashing playboy, Di lets him know that she’s not up for any repeat performances and that she’d rather not entertain any more of his diner visits unless he’s with a date.

However, she does give him a bit of good advice while he’s wrestling with the news of Rachel’s death. It’s the least she could do since she’s dealing with a man wrestling with a young woman’s mortality and her name is “Di.” A little on the nose, no?

“I want you to think very carefully about when you had that dream because when people die, everything gets mixed up,” she says to Don. “When someone dies, you just want to make sense out of it.”

As opposed to passive objectification of the fur castings, Peggy and Joan are dealing with some particularly aggressive misogyny from some of the McCann-Erickson brass while trying to figure out how to get some of the hosiery market share back from Topaz’s cheaper competitor L’eggs. Given that the interactions on this show are colored by a certain baseline of misogyny. the writers really have the ratchet up the chauvinism to make it an actual plot point. In this case, the meeting with Peggy and Joan consists of the McCann-Erickson execs making egregiously, persistently crude comments to Joan while they pretend Peggy doesn’t exist. Being the consummate professional, Joan conducts the meeting with a straight face while grinding her teeth into powder.

It was disheartening not to see Joan and Peggy align over their shared disgust over how the meeting with the McCann fuckboys went down. Instead, the two start sniping at each other over mutual jealousy. Peggy is jealous because she’ll doesn’t think she’ll be perceived as the object of desire that Joan is and Joan resents the fact that Peggy is taken seriously based on her merit while Joan fears that the fact that she grudgingly slept her way into her partnership will always linger. Naturally, the two women take shots at the other’s most deep-seated insecurities. Peggy takes a swipe at the fact that she think Joan dresses too sexy to be respected in the workplace while Joan claps back with a pointed “What you’re saying is I don’t dress the way you do because I don’t look like you. And that’s very, very true.”

The friction sends the ladies off into different directions. Joan engages in some retail therapy, buying even more sexy clothes while shutting down the sales lady’s offer of allowing her to use her employee discount from Joan’s brief turn as a shopgirl when her crap ex-husband Greg didn’t get his surgery residency.  Peggy uses this hit to her pride to motivate herself into letting an underling set her up with a dashing Brian Krakow (!!!).

After a rough start, her date goes well leading Peggy and Brian Krakow to make spontaneous plans to fly off to Paris together, only to have them thwarted when Peggy can’t find her passport. She ends up finding the passport in her desk at work the next day, because of course it’s at work. She passes off the aborted notion to go off and do something romantic and spontaneous as something aspirin can fix, like her hangover. Since there’s a bit of a time jump, we never get to see how Ted and Peggy work things out to the point that they can be in the same office with each other. Plus, there’s the fact that Ted invites Don to a party at his West Village apartment before they can go scope out babes at a fashion show. The West Village apartment must mean that Ted is divorced, right? He doesn’t seem suicidal the way he did when he was shutting off his plane’s engine midair and fantasizing about an early death while clients were in his care. Also, clearly Don convinced him to stick around so that the McCann merger could go through despite Ted’s disheveled day drinking and desperate pleas to be be bought out of the agency. In the time jump, something turned Ted around. Most likely, it’s probably all the tail he’s getting as a newly single man with a Yosemite Sam mustache.

This brings us to Ken Cosgrove who is experiencing his long, dark night of the soul amid his father-in-law Ray Wise retiring from Dow Chemical and his wife Alex Mack reminding him that he’d be happier getting out of the ad game and just living off of Daddy Wise’s money while writing the long awaited sequel to “Tapping a Maple on a Cold Vermont Morning.”  Alex Mack is right in pointing out that Ken already sacrificed his eye to the cause, even though the longer hair and eyepatch does give Cosgrove a certain Snake Plissken-style sexiness. During Ken’s argument with his wife, we get to see the actual toll that the work-related hunting accident took on him, with his eyeless socket grotesquely sewn shut. The way he’s going, Ken  is gonna look like Anakin Skywalker right before getting the Darth Vader suit drilled onto him before the industry is done with him.

Still, Cosgrove is given a rare, clear second chance at that road not taken when he’s fired by a spiteful McCann exec who is still sore over Ken walking off with millions of dollars in accounts when he joined SCD&P a few seasons ago. Despite being offered an easy way out and a healthy severance package, “Kenny and his haircut” as Pete Campbell once disdainfully referred to him, decided to take the head of accounts position vacated by Daddy Wise and vowed to make Roger and company miserable.

Apparently, being self-actualized and content wasn’t as attractive as being powerful  and important. Is that all there is?

Don is watching a Nixon speech about pulling troops out of Vietnam that places the timeframe at the end of April, 1970. As Brandon David Wilson pointed out, this placed the end of the episode right on the eve of the Kent State shooting, so it will be interesting to see how that gets relayed through Matthew Weiner’s lens. 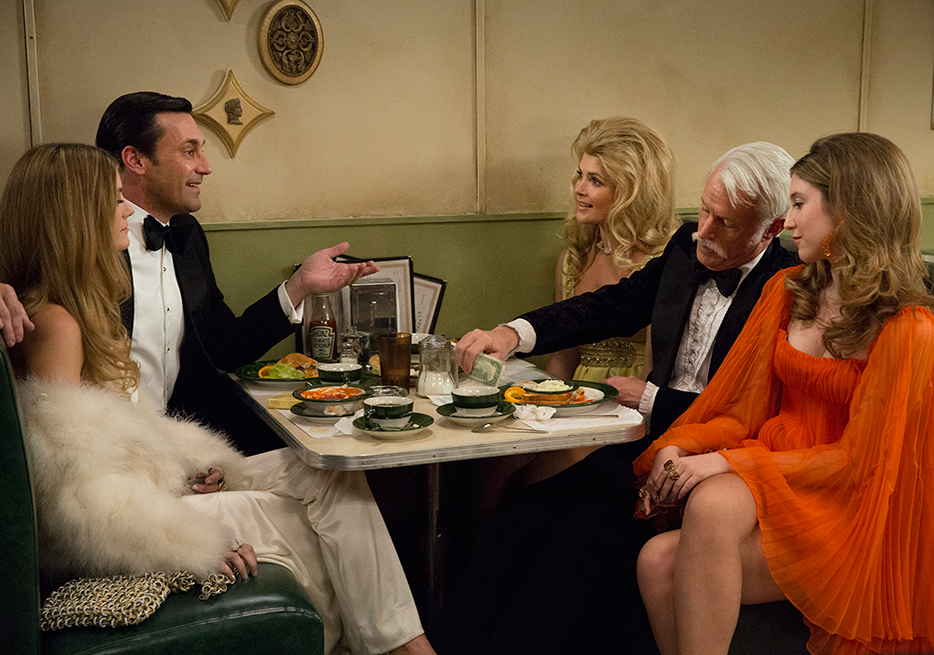