An episode almost entirely revolving around Megan is the last thing anyone wanted for the show’s remaining stretch and with “New Business,” it’s exactly what we got. In a way, it was unavoidable, given that the dissolution of the Don and Megan marriage was a thread the show needed to tie up. However, we lost valuable time that could have been devoted to Joan, Ken, or even a good Pete Campbell temper tantrum. We’re in the final countdown, so to speak, so we just have to learn to live with whatever Matthew Weiner doles out.

The episode begins with Don totally owning the role of the fun, part time dad making milkshakes for his kids. An absolutely stunning Betty makes an appearance and hilariously announces that she is going back to school for, get this, psychology. The confidence with which Betty tells Don that people enjoy talking to her is enviable. Don has a hard time keeping a straight face, but it’s not like anyone can blame him. In Betty’s defense, though, she has logged enough hours on an analyst’s couch to get a sense of the practice. Plus, it’s frequently mentioned that she went to an elite liberal arts college and enjoyed studying. Being a stay at home mom was always a bit of concession for her, so it’s encouraging to see her get excited about pursuing a lofty goal that takes her outside the home. Maybe she’ll finally be fulfilled and happy. Someone on this damn show has to be sooner or later.

Betty is the first in a series of women throughout the episode passing in and out of the sexual revolving door that is Don’s life. Betty, being the lone blonde, seems to be faring the best, with the idyllic suburban home and the adoring, if boring husband with political aspirations.  If the longing look over the shoulder is any indication, he’s grieving the loss of domestic stability and the kind of grounding that only a family can provide. He resigns himself to the fact that he’s leaving the domestic bliss behind in order to return to an empty apartment that will manage to become comically bare by the time the credits roll.

The rest of Don’s women comprise a series of tragic brunettes. His soon to be ex Megan is bitter over picking up and moving to LA once her career started gaining some momentum in New York. Unfortunately, her career never recovered and now she’s got a broken marriage and no professional life to speak of. As it stands, Megan is living off of an allowance from Don. Never mind the fact that she’s constantly being derided by her sister and her mom, Marie (played by the fabulous Julia Ormond) over the failure of her marriage, the fact that they think her ex-husband is a complete shitheel and Marie’s belief that New York is a modern day Sodom and Gomorrah which irrevocably tainted her daughter. Megan’s pronounced hostility is certainly understandable.

Coming in on the other side of the revolving door is Diana the deeply depressed diner waitress. However, it looks like she managed to upgrade to a classier Bavarian restaurant after skipping town for a bit. Diana repeatedly shut down Don’s advances, so of course he’s completely obsessed with her and tracks her down via her old boss. In the opening scene, Don talked about the blender at the diner being broken, so I really hope he didn’t take his kids out along on his stalking mission. Anyhoo,  Diana is played by Elizabeth Reaser, who also starred in True Detective as the woman who almost made a honest man out of Rust Cohle. Playing the challenging love interest of brooding and difficult, but brilliant drunks is something that Reaser clearly excels at.

Like Don, Diana also just ended a marriage. Also like Don, she is completely broken and arrived in New York from the Midwest  after disavowing her family and her own idyllic suburban household  in the aftermath of her daughter’s death. Running away from a dark and difficult past is something that Don knows something about.

However, Diana may be more haunted by her demons than Don is and that’s probably what made him choose her out of his rolodex full of stewardesses and young, interchangeable companions. In the elevator, Don and Diana cross paths with Sylvia Rosen, one of Don’s past tragic brunettes. It’s a shame Sally’s teacher Miss Farrell couldn’t have made an appearance at an adjacent table at Diana’s restaurant.

As Dr. Faye once said when she getting dumped for Megan. Don only likes the beginnings of relationship and in this case, he’s certainly invested in beginning something with Diana. When he’s woken up in the middle of the night by her phone call, he gels his hair and puts on a three piece suit to essentially receive a booty call. He’s more than receptive to her multiple red flags, including the part where she tried to throw him out of his own apartment. He takes the morning off from work in order to comfort her in the aftermath of the sudden memory of her dead daughter after seeing Sally’s bedroom.

Unlike Don, Diana isn’t satisfied to self-medicate her inner turmoil with a steady diet of booze and sex. She’s fully committed to immersing herself in her grief and guilt , so any stolen moments of bliss with Don are transgressions for which she just can’t forgive herself. Diana kicks Don out of her shitty SRO room so that she can fully devote herself to her single minded purpose of constant self-flagellation. All told, that will probably have a less disastrous end than the typical Don Draper affair.

As Don is trying to pursue this new relationship, Megan is back in New York cleaning her stuff out of the apartment. Marie does all the heavy lifting in these scenes, by accusing Don of having syphilis after seeing the stewardess’s spilled wine stain and then demanding that the movers load up everything that isn’t nailed down into the truck, instead of just Megan’s possessions. The moving bill skyrockets after Marie’s little stunt, so she strong arms Roger into paying the movers before grabbing herself a Sterling mustache ride when all is said and done. God bless her.

Megan is having a far worse day than her mom when a lunch meeting with Harry Crane in the hopes that he will help her find a new agent turns into a sleazy casting couch proposal. Remember back several seasons ago when Harry actually had redeeming qualities? Now that he’s a bona fide big shot in the TV side of advertising, he’s certainly embraced the seedy underbelly of show business.  When he slept with that Sterling Cooper secretary in a drunken weak moment during the night of the Nixon/Kennedy election, he at least had the decency to feel bad about it. Now he makes a disgusting proposition to Megan, chastises her for turning him down and then gaslights her to Don. It seems that the longer his sideburns get, the more reprehensible his behavior becomes.

The one highlight of Megan’s day is that she gets to pocket a cool million dollars from Don after giving him the same “wasted the best years of my life/career” speech that Roger predicted earlier in the episode. Of course, Megan isn’t exactly wrong, she did waste time and potential on “aging, sloppy, selfish liar” who proposed to her on a whim. Certainly, what works out to six million dollars by today’s standards would give her more than she needs to start a whole new life. Hell, it certainly seemed to take the edge off of he fact that Roger Sterling is probably about to become her step-dad, now that Marie has torn up her plane ticket home and is most likely shacking up with the silver fox. It looks like New York didn’t “poison” just Megan.

In the non-Don related storyline, a new character is introduced in the form of Mimi Rogers’ Annie Leibovitz-esque photographer Pima Ryan. Yes, that’s what we all want when we’re five episodes away from the ending of a long-running TV series, a new character.  While she does have a few great lines, including her exchange with Hot Stan where she tells him  “I can feel the tension of your need for my opinion,” I can’t help feeling that the time introducing Pima and her fabulous hair was a waste. She shoots an ad, successfully seduces Hot Stan in all his The Thing-era Kurt Russell glory, and then makes a less successful pass at Peggy. The whole thing exists to further ignite the tension between Peggy and Hot Stan.

Obviously, those two need to bone already. Whether that happens remains to be seen since this show is dead set on preventing Peggy from having any fulfillment outside of work.

However, truth be told, that could probably be said for anyone else on this show. 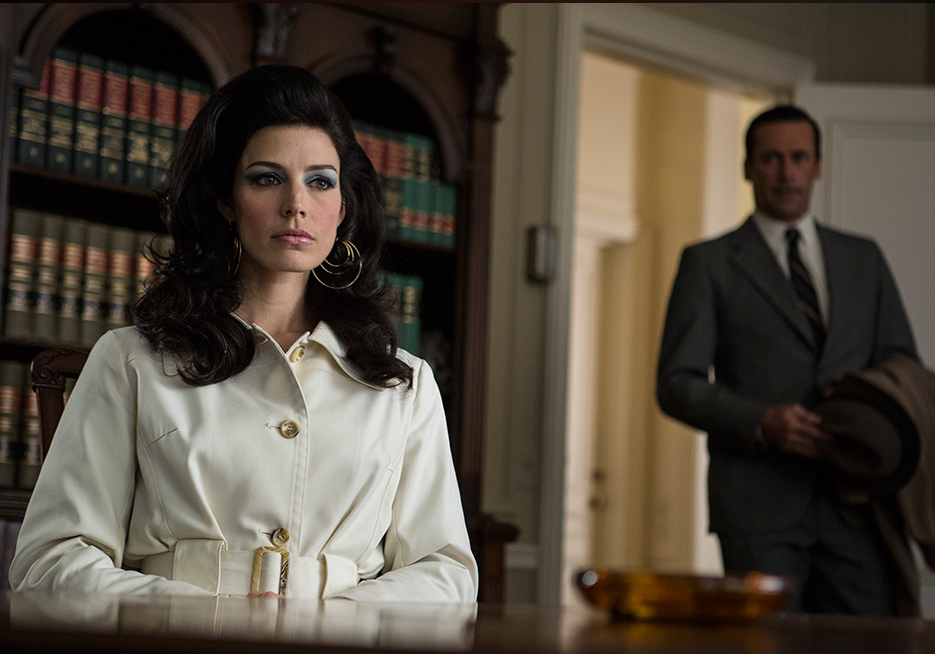