“The Forecast” has Don trying to make sense of his future of SC & P’s for some Gettysburg Address-style Roger tasked him with where he has to lay out the future of the firm at some beach resort getaway sponsored by the McCann overlords. It’s rare that Don can’t find the words he needs. Hell, his meteoric rise in the industry has hinged on him being able to pull Kodak Carousel quality pitches out of his ass at a moment’s notice, but now he’s truly stumped. Maybe that has something to do with the fact that he doesn’t have much of a plan for his own future now that he’s in this newly single holding pattern where he’s sleeping in an empty apartment he just can’t seem to unload, mainly its emptiness seems to exude more failure than opportunity. The handy Betty clone of a real estate agent lays that out for him in no uncertain terms.

Don goes looking for answers in a sitdown with Ted, where he learns that Ted pawned this assignment off on Don in the first place. Ted’s vision for the future involves bigger accounts, namely a pharmaceutical firm. Although this is a big 180 from when the formerly hollowed out husk of a creative was openly pining for death while piloting a plain and trying to plan his escape from advertising, his dreams are too pedestrian for Don. He poses the same question to Peggy who dreams of becoming the firm’s first female creative director. Her goals get loftier when she dreams of creating a catch phrase or “something of lasting value.” Naturally, Don deflates her dreams with a cynical “in advertising?” causing Peggy to march right out of this little brainstorming session. Whatever, Don. Do your own homework.

In the middle of Don’s fruitless search for the meaning of life, he’s confronted by Mathis for advice after the junior creative royally screwed up a Peter Pan pitch by dropping an F bomb in a meeting. Don relays a few anecdotes on how he managed to clean up similar messes, including the kind of boys club bravado insults reserved exclusively for alpha males.  Unfortunately, Mathis is as beta as they come, and since he lacks Don’s inherent swagger, his attempt to smooth over his misstep by telling a Peter Pan exec that he’s shocked he had the balls to come back to the firm blows up in his face.

After Mathis fails to save the meeting, he has it out with Don, who shot down his initially plan of just apologizing to the Peter Pan brass.

His daughter Sally has some similar resentment over how her parents’ good looks causes everyone around them to act. Throughout the last stretch of episodes, we’ve been treated to a series of goodbyes, with Ken getting a triumphant sendoff over to the head of accounts at one of SC & P’s clients and Megan pocketing a million dollar consolation prize after ending her marriage to Don. This time around, we’re treated to Matthew Weiner closing the book on Glen Bishop’s friendship with Sally and his unsettling bond with Betty. We first met Glen as the creepy kid who asked for a lock of Betty’s hair and then as the teen dirtbag who helps corrupt Sally at boarding school. Now we’re greeted by a tall, and dare I say, handsome Glen Bishop who is doing his best impression of Greg Brady’s Johnny Bravo incarnation. He shows up at the Francis residence with a new girlfriend in tow hoping to have one last outing with Sally before shipping off to Vietnam. Of course, his ulterior motive involves seeing Betty, for whom he apparently still carries a torch. Betty doesn’t recognize Glen at first and finds herself unconsciously fidgeting with her hair around this handsome young specimen. This doesn’t go unnoticed by Sally, as evidenced by the fact that Kiernan Shipka’s side-eye game is on point this episode. Once Sally hears Glen is going off to Vietnam, she explodes on the kid and accuses him of being a future baby killer rather than process her fear in a mature way. Given who her parents are, asking her to deal with feelings in a reasonable manner is asking a lot. She does have the decency to instantly regret her outburst and tries to get in touch with Glen so that she can apologize to Glen before heading out on her “teen tour.”

Glen misses his chance to reconnect with Sally, but he does show up at the Francis home to lay the moves on Betty, which we have to admire the kid’s confidence because that is ambitious. Betty turns down the opportunity to use Glen’s sideburns as handlebars because she’s married, which frankly, seems like it should be pretty far down the list as to why their union is ill advised. In this awkward moment, Glen admits that he enlisted in the army after failing out of college in a “I have nowhere else to go” type scenario.

After her disappointment with Glen, Sally endures her friend Sarah exude a Sahara desert sized thirst for Don during their going away dinner. At the bus station, Sally calls Don out for not shutting down Sarah’s over the top advances.

“Anyone pays attention to you, and they always do, and you just ooze all over them,” Sally says of both Don and Betty.

“You are like us,” Don tells Sally. “You’re a beautiful girl. The rest is up to you.”

Sally then gets on the bus, still harboring an active resentment against her dad. Hopefully, they come to some kind of understanding before the show wraps up in four episodes.

Attracting attention for her looks is something Joan knows a bit about as she managed to snare the interest of a wealthy, retired real estate developer when he accidentally walked into the California branch of the firm. Robert, played by Bruce Greenwood (!!!) is instantly taken with Joan, as is any man with eyes and a pulse. However, Robert goes the extra mile by flying to New York City unannounced and wooing Joan over dinner. However, once he overhears Joan haggle with her babysitter, he has a temper tantrum over the fact that he’s done raising his kids and he doesn’t want to raise hers, not that she even asked him to. Also, whoa dude, it’s the second date. I know it’s a different time and all, but maybe at least meet her friends before you start planning a lifetime of globetrotting together. Sheesh. Joan wisely walks out of his hotel suite and in a perfect world, that would have shut the door on Robert. However, he showed up to her office with a dozen roses claiming to have had a change of heart and wants to be let into her son’s life. Joan actually seems to be considering this despite all the myriad red flags this guy has thrown up. This whole series has consisted of dudes either disappointing Joan, sexually assaulting her, as with her ex-husband, or treating her like a call girl, like the Jaguar accounts slime. It’s really saying a lot when her best prospect for a life partner was Bob Benson.

The episode ends with Don’s peppy real estate agent actually unloading his sad apartment onto a young couple. If Don was having trouble finding meaning, fulfillment and tangible goals in his future, the fact that he’s now homeless certainly doesn’t help. As the episode closes, we’re treated to another “Don staring into the void” shot that we’ve grown accustomed to over the years. Only four more episodes until the void swallows him up entirely. 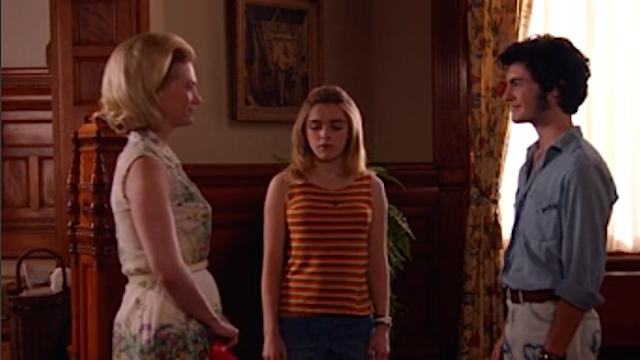