Although we didn’t get to see him on screen, “Time & Life” marked a sort of homecoming for Layne Price given that Jared Harris directed the episode. Of course, it’s hard not to think of poor Layne swinging from the door every time we get a glimpse of his old Mets pennant gracing the wall of his old office, now occupied by Don.

Of course, the office won’t be occupied by Don for long. Just as he has 30 days to vacate, SC & P has 30 days to vacate its office before being swallowed entirely by its behemoth parent company McCann-Erickson. In 1963, Sterling Cooper managed to strike out on its own after circumventing the McCann buyout after the merger with Putnam, Powell and Lowe in a bold, zero hour maneuver. This time around, the agency tried to repeat history and start over in its California branch by walking away with the conflicting clients who would have been fired after the merger. Unfortunately, the McCann brass squashed this dream, but promised the five partners the keys to the advertising kingdom in the form of plum accounts, like the pharmaceutical account Ted idealized in the previous episode and the Coca-Cola account earmarked for Don. After all, it was McCann-Erickson who spearheaded the “It’s the real thing” campaign for Coke, beginning in 1969. Imagine the pitch meeting where Don proposes the landmark 1971 “I’d Like to Teach the World to Sing” commercial.

However, despite Don’s hollow words of reassurance at the end of the episodes, the partners don’t see this as the beginning of something, but the end. For Roger, it’s the end of the Sterling name, as he was hoping the agency would act as his legacy since he doesn’t have a son. Peter has spent his entire professional life in his current job and can’t wrap his head around the change. Hell, he can’t even deal with the fact that his daughter was the first Campbell to be denied entry into an elite Connecticut prep school and comes to blows with the headmaster over some centuries-old Hatfield and McCoy-style WASP feud that sounds ripped out of the script from Outlander. Fortunately, the whole dust up does lead to a tender moment with Trudy, who is impressed with Pete’s refusal to take no for an answer. Yeah, why don’t you ask that German maid he tried to force himself on a few seasons ago what she thinks of that?

For Joan, the firm’s acquisition serves as the abrupt slam of her head hitting the glass ceiling, if not the start of a decline. She’s already had issues with McCann brass openly leering at her and making crude jokes about her in meetings and she couldn’t help but noticed that none of the plum accounts Jim Hobart bandied about in the meeting were earmarked for her. And for Don, the end of SC & P marks the end of freedom and autonomy. Now he’s a grunt clocking in and out each day under someone else’s supervision. California was always Don’s escape hatch. It’s where he visited Anna and where he dropped out of life for days at a time with a gorgeous young heiress named Joy. He almost ran off to California with Megan to start the West Coast office before handing the opportunity over to Ted as a failed, last ditch effort to save his own marriage. It’s worth pointing out that Don is ready to pick up and flee to California when the move will save his company, but not his marriage to Megan.

Despite the dissolution of the firm, Don is also consumed with the finding the diner waitress Diane, who disappeared from his life, and hopefully ours, a few episodes ago. After his answering services accidentally relayed the fact that she called, apparently against her wishes, Don went on the search for her, but ended up just finding her old furniture and a lovely gay couple at the seedy apartment she abandoned. Unfortunately for us, Don refuses the drink with the half of the couple who invites him in.

As for Ted, he’s exhibiting an almost Zen like ease with the acquisition as he’d much rather just focus on creative and let someone else handle the big picture decisions. For someone who claims California never meant much to him, he certainly adopted its go with the flow attitude. Plus, his ex-wife is in California and he just rekindled things with an old college flame back in New York. Despite all that, the fact that the woman he once moved 3,000 miles to get away from is right down the hall doesn’t seem to bother him much. You’re an odd bird, Ted Chaough.

Speaking of that woman, Peggy is in a disastrous child actor casting session with Hot Stan, who only seems to get hotter as his beard gets bigger. Naturally, Hot Stan is really good with the kids while Peggy is essentially playtime kryptonite.  Pete walks in right as Peggy is on the receiving end of an uncomfortable hug from one of the kids. Perhaps because of their shared bond over their own child that Pete warns Peggy about the firm dissolving, causing her to go into panic and seek out the help of a headhunter who advises her to stay put. Later on, an argument with one of the child actors’ mothers prompts an emotional purging from Peggy on how men can move on from an unplanned pregnancy with little to no consequences while women cannot. Clearly, years of repressed guilt are coming out despite Don’s hospital bedside counsel on how one day she’ll be amazed at how much this surprise birth didn’t happen.

In addition to being able to rock a neckerchief and being good with kids, Hot Stan also has the sensitivity to realize that Peggy is essentially talking about herself and tenderly asks her how she resolved matters when she was pregnant. All Peggy knows is that her child is living with a family and that the fact that she doesn’t know where the kid is doesn’t mean that she doesn’t care about him, but the not knowing allows her to move on with her life. In what is probably the greatest moment of intimacy for the two friends, Hot Stan is supportive of her and Peggy, being Peggy, goes back to work. However, in an adorable interoffice phone call, Peggy does insist that Hot Stan come over the McCann with her, and since this is Peggy, that might as well double as a declaration of love. On any other show, the two probably would have kissed in the office or would have ended up together in the final episode. However, this isn’t any other show, so who knows how this is all going to end? 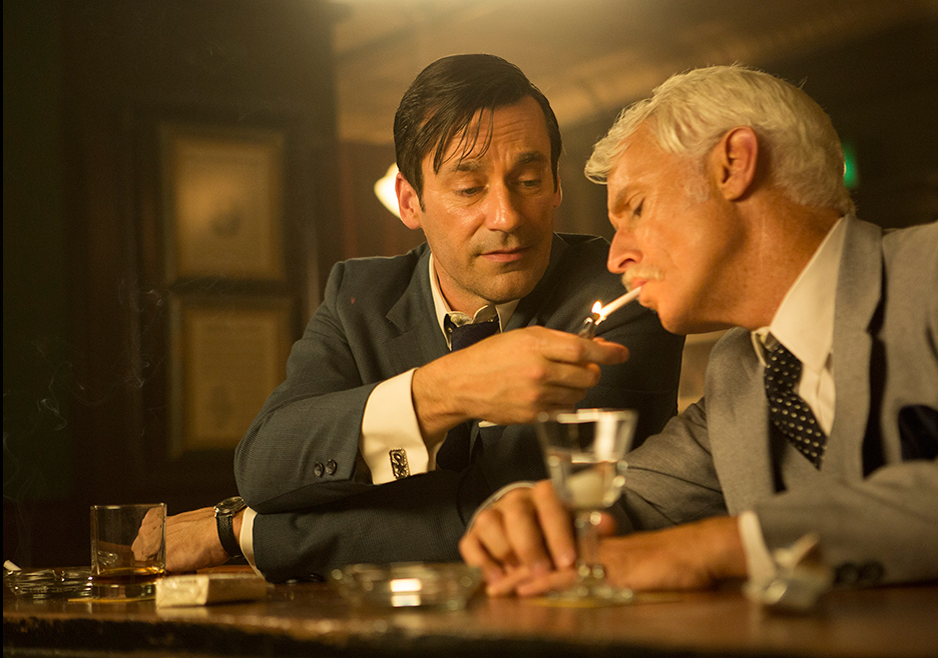