A slew of local elected officials have jumped to endorse Hillary Clinton’s 2016 presidential bid—but Council Speaker Melissa Mark-Viverito isn’t one one of them.

Ms. Mark-Viverito today joined Mayor Bill de Blasio in saying she’d wait and see before getting behind any candidate for the Democratic presidential nomination.

“Secretary Clinton has a strong record, and obviously when we have the next presidential election I believe very strongly that a Democratic candidate will be a much stronger candidate than any Republican who is out there in terms of values and issues. But today’s not going to be a day of endorsements,” Ms. Mark-Viverito told the Observer at an unrelated City Hall press conference.

Yesterday, Mr. de Blasio—who managed Ms. Clinton’s 2000 campaign for U.S. Senate in New York and invited Ms. Clinton and President Bill Clinton to his inauguration—said he, too, was “not yet” ready to back Ms. Clinton as he awaits an “actual vision of where she wants to go.”

Ms. Mark-Viverito today wouldn’t comment on those remarks from the mayor, telling three different reporters it was not a day for endorsements and that she had no comment on Mr. de Blasio’s position.

“If you guys want to play pundit, that’s up to you to decide. I’ll let the comments stand,” she said.

But the speaker—an outspoken liberal who has heightened her national profile on the issue of immigration reform—echoed Mr. de Blasio’s comments about wanting to hear details from any candidate in the race.

Mr. de Blasio has vowed to get involved in the presidential race and urge any Democratic candidates to address issues like income inequality, and while he’s avoided criticizing Ms. Clinton overtly, some others on the left wing of the party have questioned her progressive credentials. The Working Families Party has tried to draft Massachusetts U.S. Senator Elizabeth Warren to run, and others are eying former Maryland Gov. Martin O’Malley as a potential challenge to Ms. Clinton from the left.

Ms. Mark-Viverito and Mr. de Blasio are decided outliers in New York City and state politics when it comes to their decision not to quickly endorse Ms. Clinton. Gov. Andrew Cuomo—once considered a contender for the seat himself—endorsed Ms. Clinton yesterday, as did his Lt. Gov Kathy Hochul. The former occupant of Ms. Mark-Viverito’s position, Christine Quinn—who now works for Mr. Cuomo—also promptly endorsed Ms. Clinton yesterday. A slew of lawmakers, led by Congresswoman Carolyn Maloney, turned out on Saturday to support her campaign before it was even announced. U.S. Senators Charles Schumer and Kirsten Gillibrand also made endorsements yesterday. And today, Councilman Vincent Gentile—running for Congress in the right-leaning 11th congressional district in Staten Island and southern Brooklyn—also threw his support behind Ms. Clinton.

Even a Republican is getting in on the excitement: Westchester County Executive and former gubernatorial candidate Rob Astorino praised Ms. Clinton’s run this morning. 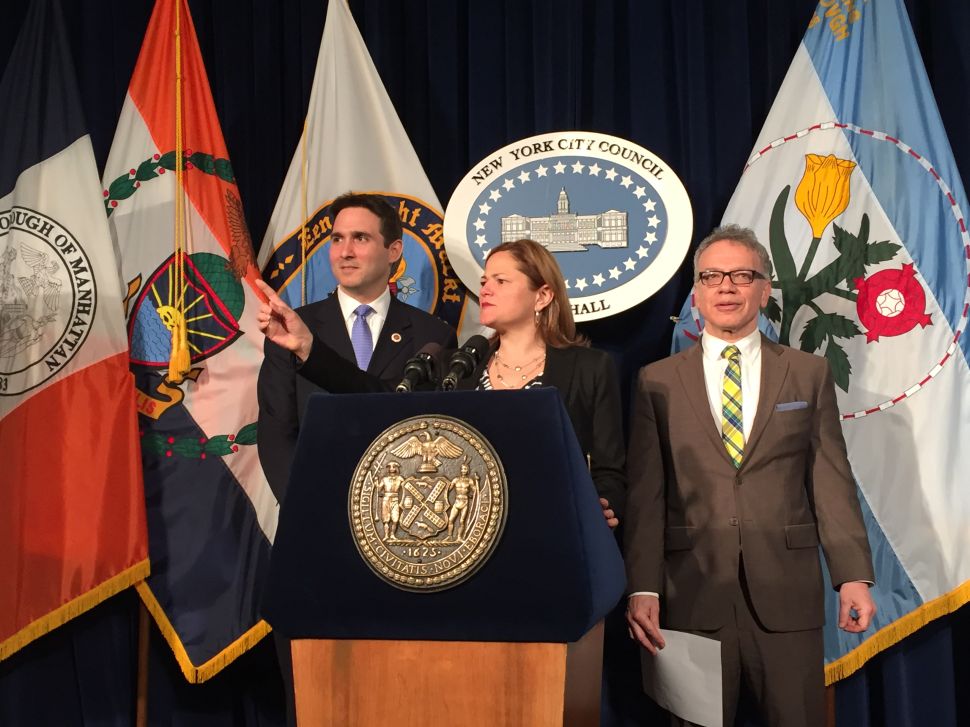