In an appearance this evening in the Newark Hilton, an embattled but defiant and self-proclaimed outraged U.S. Senator Bob Menendez (D-NJ) reacted to the 14-count indictment brought against him by the feds, the culmination of weeks of nail-biting amid rumors of New Jersey’s senior senator jammed up at the end of an ironic political life’s arc.

Menendez refused to accept that this is the end, insisting on a well-funded defense as his starting point to public vindication.

“For nearly three years I have lived under a Justice Department cloud and today I am outraged that this cloud has not been lifted,” said Menendez, who claimed federal investigators were tricked into pursuing this corruption case against him.

“I will not be silenced,” said the senator, attired in blue suit and red and blue striped tie. “I’m confident at the end of the day I will be vindicated and they will be exposed.”

He didn’t take any questions from the media a day before he’s supposed to appear in court.

He hearkened back to his beginning in politics as a former Union City Mayor Bill Musto backer who helped bring down his mentor by testifying against him in a 1982 racketeering case. “I wore a bulletproof vest for a month,” Menendez said. “That’s how I began my career in public service and that is not how my career is going to end.”

A former Senate Foreign Relations Committee chairman wrestling now with allegations that he abused his office, Menendez insisted he fights for issues he believes in and for the security of the country.

Joe Kyrillos, Menendez’s vanquished 2012 Republican rival, tonight said the senator needs to consider stepping down, but Menendez said he intends to remain a U.S. Senator. “I am not going anywhere,” he exclaimed, doubling down on comments he made when details of the case first emerged. “I’m angry and ready to fight because today contradicts my public service career and my entire life. I’m angry because [investigators] don’t know the difference between friendship and corruption and have chosen to twist my duties as a senator… into something that is improper. They are dead wrong. I’m gratified to live in a country where prosecutors’ mistakes can be corrected [by the courts].”

Speaking first in English and then in Spanish, Menendez appeared at a podium to cheers as flashbulbs popped, and at one point asked his Cuban American supporters to refrain from their emphatic cheering statements, reminding them that it was a press conference not a rally.

According to allegations in the indictment, between January 2006 and January 2013, the senator allegedly accepted close to $1 million worth of lavish gifts and campaign contributions from Florida eye Dr. Solomon Melgen in exchange for “using the power of his Senate office to influence the outcome of ongoing contractual and Medicare billing disputes worth tens of millions of dollars to Melgen and to support the visa applications of several of Melgen’s girlfriends,” according to the federal Department of Justice.

Expected to appear in federal court tomorrow, Menendez in his appearance urged the public to remember those times that prosecutors made mistakes.

The Senator’s office released his full statement, which is reprinted below:

“For nearly three years I’ve lived under a Justice Department cloud and today I am outraged that this cloud has not been lifted.

“I’m outraged that prosecutors at the Justice Department were tricked into starting this investigation three years ago with false allegations by those who have a political motive to silence me, but I will not be silenced.�� I’m confident – at the end of the day – I will be vindicated and they will be exposed.

“I began my political career – 40 years ago – fighting corruption in city government.  I publicly complained about illegal financial dealings in my city until the FBI investigated and the U.S. Attorney filed corruption charges against the mayor and others.  I was called to testify for the prosecution.  I received death threats.  I wore a bulletproof vest for a month.  That’s how I began my career in public service.  And this is not how my career is going to end.

“I have always conducted myself in accordance with the law.  I have always stood up for what’s right.  I fight for the issues I believe in, the people I represent and for safety and security of this country every single day.

“That’s who I am and I’m proud of what I have accomplished. And I’m not going anywhere.

“I’m angry and ready to fight because today contradicts my public service career and my entire life.

“I’m angry because prosecutors at the Justice Department don’t know the difference between friendship and corruption and have chosen to twist my duties as a Senator –and as a friend — into something improper.

“They’re dead wrong, and I’m confident they will be proven so.

“I am gratified to live in a country where prosecutors’ mistakes can be corrected by courts and juries and I ask my friends, colleagues and community to hold their judgment and remember all the other times where prosecutors have gotten it wrong.

“The people of this great state have elected me to serve and represent their interests in the United States Senate and that is exactly what I will do, no matter how long it takes to clear my good name.  New Jersey is my home and I will continue to fight for you.” 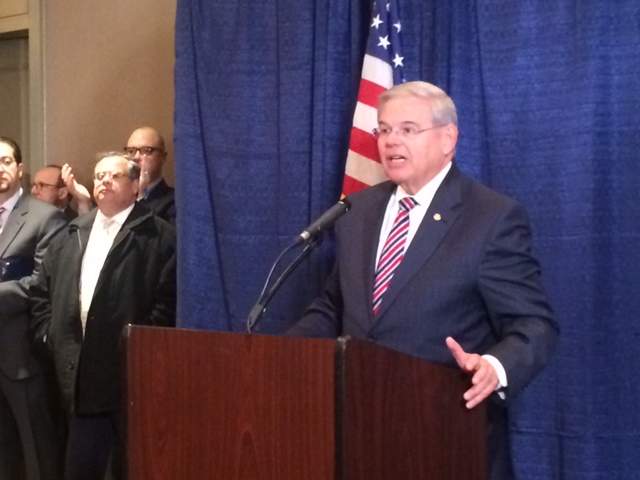