SOMERSET — The Somerset Republican Organization’s annual Lincoln Day Dinner on Wednesday night was mostly about paying tribute to the party’s early conservative hero, but there was a moment amid the idol worship and wining and dining that showed there was something else –something more timely — on the minds of guests in attendance.

“Is the PolitickerNJ guy still here? I do have one little announcement. One tiny little announcement,” cracked a whimsical Lt. Gov. Kim Guadagno, who took the stage in pink sweater to begin the night’s proceedings. “But that’s not what you think I’m going to say. I’m not going to say that. I’m not even going to comment on that because that would be too much fun.

“And we don’t want the PolitickerNJ guy to have too much fun,” she added.

Guadagno’s comment was just vague enough to leave most guests in the room scratching their heads — she dropped no names, offered no details as to what the announcement was or even what form it would take, nor why it would be “too much fun” for the audience. But based on a conversation this reporter (or Guadagno’s “PolitickerNJ guy”) had with the lieutenant governor earlier, which saw her shaking her head solemnly and ultimately declining to comment on one of the questions posed, it might be safe to assume that she was alluding to a subject that has consumed New Jersey’s political world over these last few hours: the indictment of U.S. Senator Bob Menendez (D-NJ).

Not a day after news broke that the state’s top Democratic lawmaker had been indicted by a grand jury in a federal corruption case that could have unforeseen implications on the political landscape in New Jersey, Republicans in Somerset County appeared largely unfazed by — or else found themselves torn over — Menendez’s situation. There was little to no talk of the subject as pols from across the state mingled in line at sprawling buffet tables or noshed on finger desserts under ballroom chandeliers, and advances by this reporter to glean some reaction from some of the event’s more high profile guests — including Senate Minority Leader Tom Kean, Jr. (R-21) or state Senator Mike Doherty (R-25) — ultimately ended in small talk about unrelated trivialities.

“It’s definitely a sad day for New Jersey,” said Assemblywoman Nancy Munoz (R-21), who also declined to further comment while standing next to Guadagno prior to the event.

PolitickerNJ has written about the subject before, when rumors that charges against Menendez in the federal investigation into his relationship with Florida eye doctor and personal friend Salomon Melgen were imminent had first cropped up. Even then, it was a rare showing of restraint that the scandal went untouched by Menendez critics, but especially by Republicans, who at the very least could have made an easy case that one of the state’s leading Democrats running aground on allegations of corruption was emblematic of some deep, underlying problem with the Democratic party (another top Democrat, Hillary Clinton, was also dealing with her own scandal at the time). But that didn’t happen, and according to Monmouth University pollster Patrick Murray, who PolitickerNJ talked to about the story at the time, it was largely out of prudence: the indictment hadn’t dropped yet.

“Republicans hope it will be damaging, and Democrats hope it won’t be damaging. And we’re not sure whether they will be at this point,” Murray said, explaining why so few had jumped at the opportunity to score fast political points.

Expect this time the situation will clearly be damaging. A ranking Democrat in Washington and one of the most powerful players in New Jersey politics, Menendez is already reeling from the effects of an indictment that he has now repeatedly sworn to fight. Not two hours after details of the charges leaked to the press, Menendez announced that he would be temporarily stepping down from his leadership post on the powerful Senate Foreign Relations Committee, where he’s been a vocal critic of certain aspects of President Barack Obama’s foreign policy (he explained his decision in a letter to Senate Minority Leader Harry Reid saying “while there is no caucus rule that dictates that I do so, I believe it is in the best interests of the Committee, my colleagues, and the Senate which is why I have chosen to do so.”) Many observers, even some Senate Democrats, are also convinced Menendez could face serious legal troubles, including a potentially long prison sentence if convicted.

What’s more, New Jersey Republicans — a number of them in the room last night — stand to profit personally from the senator’s demise. A shortlist of Republican lawmakers and officials Gov. Chris Christie could lift Menendez’s replacement from should the Democrat be forced to step down include Guadagno, Kean, state Senator Joe Kyrillos (R-13), Assembly Minority Leader Jon Bramnick, (R-21), former Senator Jeff Chiesa, former Assemblyman Richard Bagger, and state Senator Kevin O’Toole (R-40). There’s also the less likely possibility that he could go with a more conservative firebrand such as Assemblyman Jay Webber (R-26), who was also in attendance last night.

Again, Republicans’ hesitation to capitalize on Menendez’s — and by extension, his party’s — vulnerability highlights just how sensitive an issue the federal indictment of a longtime and in many ways well-respected pol really is. It’s not just that the wound is still fresh; many are still trying to figure out whether it does critically injure Menendez and exactly how the situation will play out. Rather, it could also be that politicians in New Jersey — dubbed the “Soprano State” for a reason — know all too well how easy it is to fall victim to the kind of temptation that has now come back to burn Menendez. Republicans, after all, are dealing with it themselves: multiple reports over these last few months also allege that indictments in the federal investigation into Bridgegate, the albatross of Christie’s career, are just around the corner.

For their part, Republicans at Somerset’s Lincoln Day dinner largely kept the issue out view, relegating any discussion of Menendez and his predicament to whispers over coffee or nebulous comments on stage. Mostly, they kept it about Lincoln, America’s “first president .. and best”, according to Assemblyman Jack Ciattarelli (R-16), the event’s darling, who recalled in epic fashion the life and times of the Illinois native in a sprawling speech on stage. Steve Forbes, the publishing executive-turned-Republican presidential nominee, also spoke, railing against a mangled U.S. tax code and an out-of-control Federal Reserve that’s failed to maintain monetary stability for consumers and producers in recent years. Retired Col. Jack Jacobs, a Medal of recipient for his service in the Vietnam War, also spoke.

But that didn’t mean Menendez was a non-issue. Speaking to PolitickerNJ as the party migrated from a cocktail hour in one room to the main event in another, Lance did comment, calling it a “sad day for New Jersey,” but arguing that “the legal process should now take it’s course.” Asked if he would have the senator resign, Lance wouldn’t go so far, but did point to several editorials written in the wake of the indictment that have — including one by the Star Ledger, which remorselessly asked Menendez to “spare us the drama” and quit already.

“I will leave that up to Senator Menendez, but it’s my understanding that certain important editorial papers in this state have already called for his resignation,” Lance said.

National Republicans yesterday were more stern in their judgement, arguing Menendez’s “ethics lapses have long been a distraction to the United States Senate.”

“With today’s indictment, the FBI and the Justice Department made it clear that Senator Menendez has betrayed the trust of New Jersey families. His actions reinforce all that the American people believe is wrong with Washington Democrats and closes the book on a Senate Democrat majority that put their personal interests ahead of the American people,” said National Republican Senatorial Committee Spokeswoman Andrea Bozek.

And on Thursday morning, unsuccessful 2013 U.S. Senate candidate Brian D. Goldberg, now the chairman of the Empowerment PAC, called for Menendez to resign. Anchoring the 527 political action committee focused, according to its mission statement, on growing the Republican Party, the little-known Goldberg stepped up the off-with-his-head rhetoric where better known Lincoln-loving pols feared to tread.

“Bob Menendez’s actions are all about the entitlement mentality we at The Empowerment PAC believe is the main cause of many of our country’s current problems,” said Goldberg. “We stand for an emphasis on Empowerment, not entitlement, as the way to restore America to greatness.

“By stepping down from his position as ranking member of the Senate Foreign Relations Committee, Senator Menendez has himself acknowledged the negative impact these charges have on his ability to represent the citizens of New Jersey,” he added. “In order to avoid further and prolonged distraction, the Senator needs to immediately resign and allow the people of New Jersey to elect a new, unimpaired Senator to provide the strong, effective representation we require in Washington.” 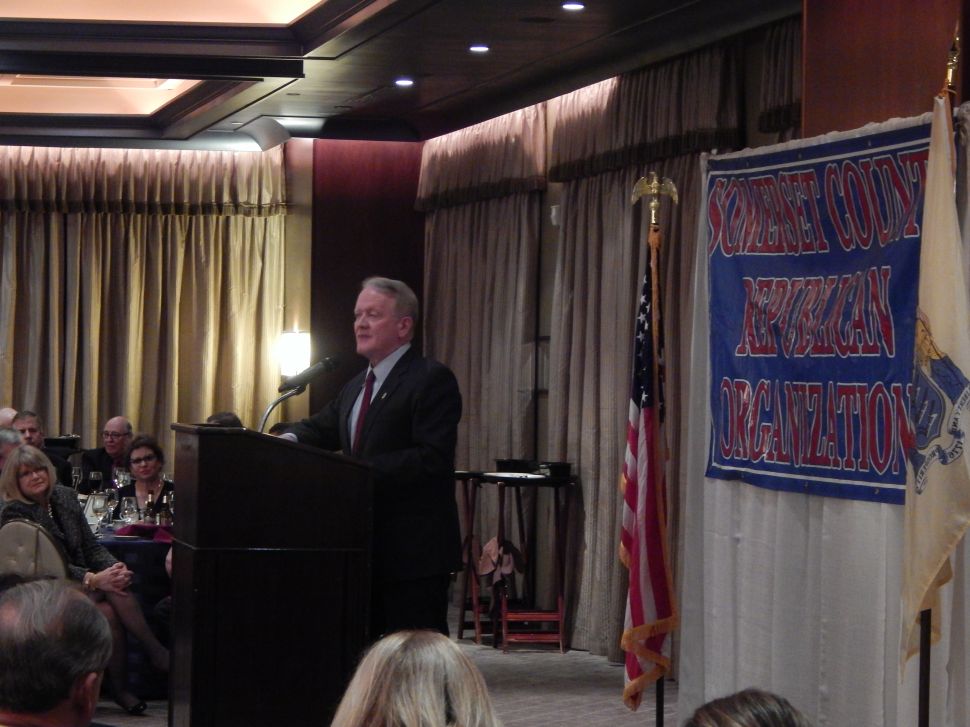