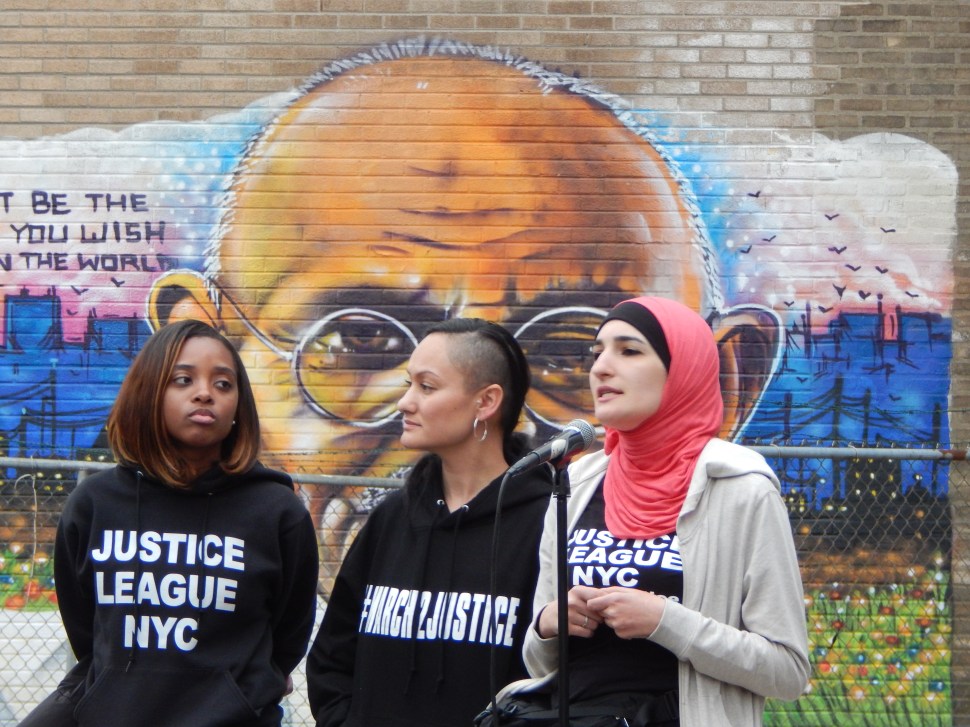 TRENTON — Marching from New York City to Washington, D.C., in the name of social justice, a group of some 50 activists ended the second day of their trek here, at the Gandhi Community Garden off East Hanover Street, where they held a small rally to call attention to the issues of race and policing in America. (Brush/PolitickerNJ)

Ruiz/Essex gamesmanship leading up to 2017

That jar of political pickle dust awaiting many a player seemingly destined for great things has not yet appeared to eclipse the low-key statehouse movements of state Senator M. Teresa Ruiz (D-29), who by virtue of Essex residency and machine affinities persists as a viable Democratic Party primary brand name who nonetheless still has a barrier in front of her called 2017.

Virtually bubble-wrapped in the upper echelons of the Essex County Democratic organization and never visibly ravenous for more power, Ruiz quietly and nearly effortlessly maintains an edge on others in her party with feverish designs on statewide office. (Pizarro/PolitickerNJ)
Ruiz/Essex gamesmanship leading up to 2017 | New Jersey News, Politics, Opinion, and Analysis

Christie hits retail trail at N.H. tavern stop as locals size him up

NEWMARKET, N.H. – New Jersey Governor and potential 2016 Republican presidential candidate Chris Christie mixed in some retail politics after a policy speech and a pizzeria stop on Tuesday among a New Hampshire crowd with mixed political views.

“[President Barack Obama] appears like a man in a dark room, struggling and feeling along the wall for the light switch of leadership,” said Christie to a crowd of about 75 people at the Stone Church Meeting House Tavern in Newmarket, New Hampshire. “He hasn’t found it for six and a half years now, and he’s not going to find it, I suspect, in the next year and a half. (Bonamo/PolitickerNJ)
Christie hits retail trail at N.H. tavern stop as locals size him up | New Jersey News, Politics, Opinion, and Analysis

Christie, in N.H. pizzeria, discusses policy with locals, vows to press on nationally despite problems in N.J.

MANCHESTER, N.H. – Hours after giving a speech in which he criticized federal entitlement spending and offered a plan for reform, New Jersey Governor and potential 2016 Republican presidential candidate Chris Christie engaged a New Hampshire resident in a serious discussion about the issue and his reform proposals.

“This is for the greater good of our country,” Christie told Kath Allen in Caesario’s Pizza on Elm Street in downtown Manchester, New Hampshire on Tuesday, surrounded by the media scrum that is following Christie around during several appearances in the Live Free or Die state this week. “I think if you look at what I’m proposing, that’s what will preserve Social Security and Medicare for the people that really need it. We better get smart about how we’re going to do it.” (Bonamo/PolitickerNJ)

n an intensifying 2016 presidential atmosphere, U.S. Rep. Bill Pascrell, Jr. (D-9) leaped to the front of the Democratic congressional delegation with a flurry of blows aimed at Gov. Chris Christie’s plan to incrementally raise the Social Security retirement age to 69 and reduce benefits for certain earners.

A big backer of former Secretary of State Hillary Clinton, Pascrell (pictured, above, with John Graham) elbowed his way into the conversation by highlighting legislation he cosponsored to extend the solvency of Social Security to 2100 without making harmful cuts to seniors. (Pizarro/PolitickerNJ)
Pascrell slams NH-trotting Christie as ‘one of most unpopular’ guvs in country | New Jersey News, Politics, Opinion, and Analysis

We already knew Thomas Jefferson and James Madison were rolling over in their graves.

Maybe this isn’t either, however, the U.S. Constitution and Supreme Court indeed baffle many adults in New Jersey, who do not know basic facts about those American pillars, according to research by two Stockton University professors. (Pizarro/PolitickerNJ)

As Gov. Chris Christie prepares for his first out-of-state town hall, the president of New Jersey’s police union today asked the Republican to “be honest” with the public about ongoing issues with the state’s public pension and benefit system — stressing, as he has before, that it is not “one monolithic fund that is losing money daily.” (Brush/PolitickerNJ)

Mark Sheridan, the son of John and Joyce Sheridan, this morning on behalf of his family offered a $250,000 reward for information leading to the arrest and conviction of those responsible for the October 2014 deaths of his parents.

The Somerset County Prosecutor’s Office concluded the deaths in their home of John and Joyce Sheridan were the consequence of a murder-suicide. But citing what they see as an incompetent investigation, attorney Mark Sheridan and his brothers do not accept those findings.
Mark Sheridan offers $250K reward for information about his parents’ deaths | New Jersey News, Politics, Opinion, and Analysis

Boosted perhaps by the prospect of a presidential year in 2016 and memories of jackpot numbers in 2008, the Democratic Congressional Campaign Committee (DCCC) is already heaping scorn on the brand new congressional career of U.S. Rep. Tom MacArthur (R-3). The argument?

MacArthur has been complicit in Republican dysfunction.

“As Republican ‘One-Term Wonders’ like Congressman MacArthur hit this milestone, they will surely try and rewrite history by casting their first 100 days in Congress in an effective light,” said Matt Thornton of the DCCC. “Congressman MacArthur’s voting record tells a different story, as does his being party to House Republicans’ utter failure to govern effectively.”

For Christie, indictments in Bridgegate investigation could mean vindication

In January of 2014, revelations that political retribution may have been behind the closing of commuter lanes outside the George Washington Bridge two months before landed with a thud in Trenton. Suddenly, Gov. Chris Christie — having just won reelection by a wide margin, having been featured on the cover of Time magazine, and having been generally considered among Republican circles to be one of the party’s brightest stars– was forced under a cloud of suspicion. (Brush/PolitickerNJ)

A substantive policy speech, a big network interview and several days of lunches and grip-and-grins across the Granite State.

It’s the start of the Chris Christie comeback — at least that’s the idea.

Dogged by six months of scandals, anemic polling numbers and his home state’s fiscal problems, the New Jersey governor is barreling into New Hampshire this week, unfazed that his 2016 obituary has already been written. (Stokols and Isenstadt/Politico)
http://www.politico.com/story/2015/04/chris-christie-jump-starts-campaign-116983.html#ixzz3XNTVJP00

If there’s any immutable rule in politics, it should be: beware of candidates who try to be “bold” merely for the sake of looking bold.

Chris Christie, trying desperately to keep his presidential hopes alive, wants to look bold, and he’s not above throwing millions of elderly Americans under his campaign bus to do so. That’s the only conceivable explanation for the New Jersey Republican governor’s misinformed and dangerous proposals to “fix” Social Security. (Hiltzik/Los Angeles Times)

Gov. Chris Christie spent Tuesday reassuring his supporters that he’s still bold, still brash and should still very much be in the 2016 conversation.

On the Hugh Hewitt show, the New Jersey Republican told the host outright, “If I run, I will beat [Hillary Clinton].” He mentioned Pennsylvania, New Mexico, New Hampshire and Colorado as four states won by President Barack Obama in 2008 and 2012 that he believes he could put in play. (Lerner/Politico)
http://www.politico.com/story/2015/04/chris-christie-targets-hillary-clinton-116986.html#ixzz3XNUKybPE

New Jersey Gov. Chris Christie would like to raise the age to qualify for Medicare, part of a bold plan to reform entitlementsthat he released Tuesday morning. (TIME) 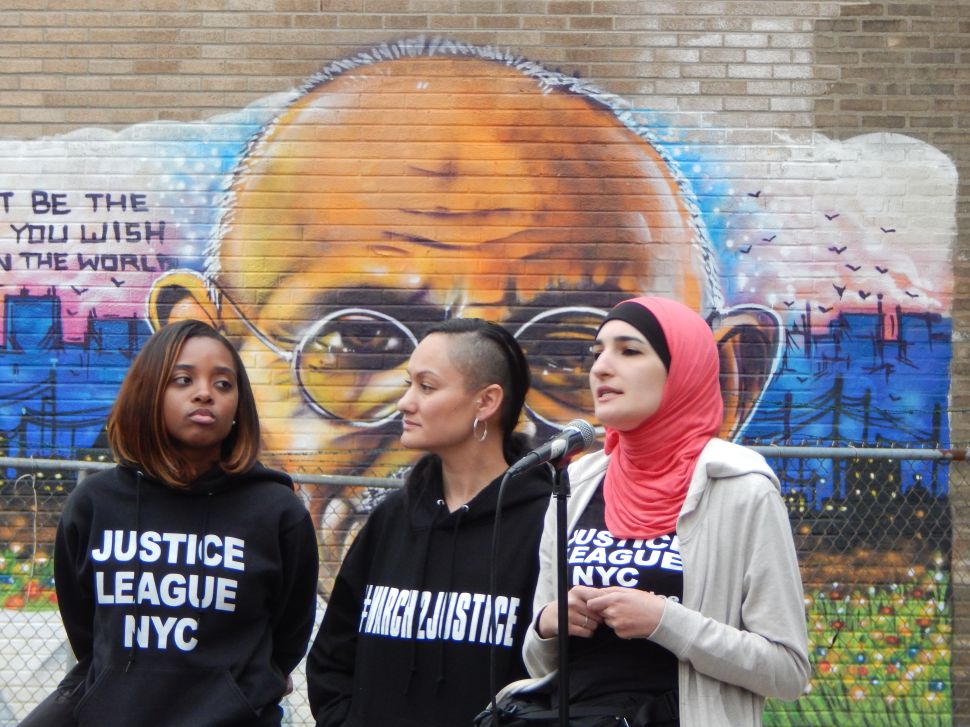