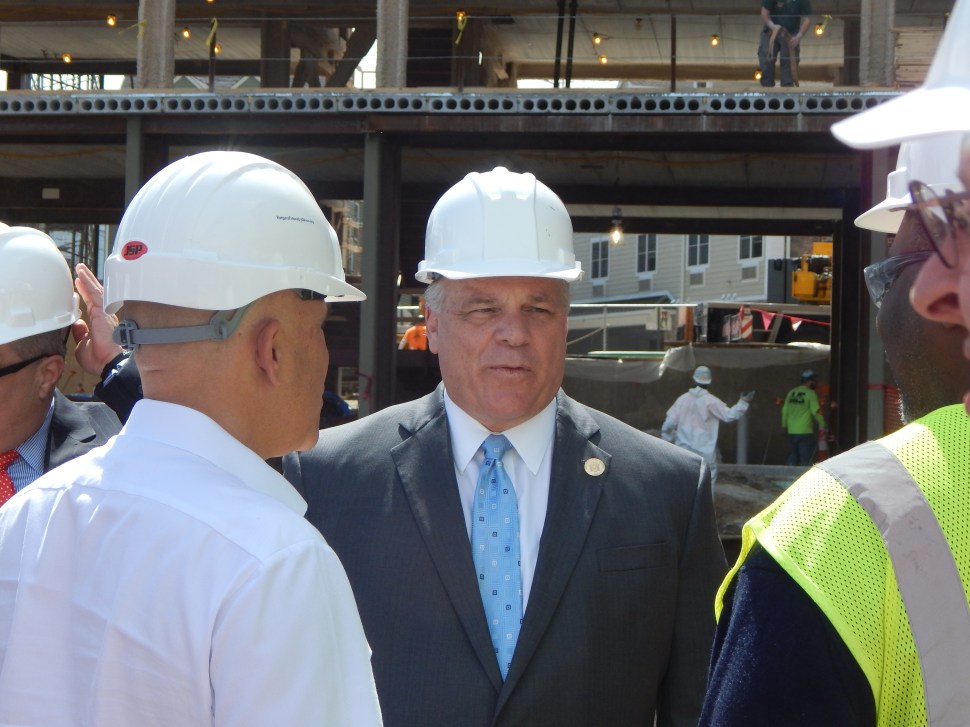 With Board Tony Monteiro (pictured) the apparent target, Mayor J. Christian Bollwage this afternoon called upon Department of Education Commissioner David Hespe to conduct a thorough review of the Elizabeth Board of Education’s (BOE) 2015 -2016 Budget, which includes a $7.5 million tax levy increase for the 2016 school year. (Pizarro/PolitickerNJ)

LONDONDERRY, N.H. – Before more than 250 people at a town hall meeting at the Londonderry, New Hampshire Lions Club, New Jersey Governor and potential 2016 presidential candidate Chris Christie spoke about his New Jersey roots and the importance of being yourself, then proceeded to be himself when discussing a range of issues with an assembly of potential primary voters.

During the course of the more than 90 minute meeting, Christie went back and forth with audience members about various of his domestic and foreign policy positions. (Bonamo/PolitickerNJ)

The State of New Jersey has no official protocol for the use of body cameras by law enforcement, Acting Attorney General John Hoffman this afternoon told Assemblyman John Burzichelli (D-3).

“We have a group together looking at that exact issue,” said Hoffman, when the assemblyman asked New Jersey’s top cop what the state is doing to coordinate specs for body cameras.

Three jurisdictions in the state have cops outfitted with body cameras, Burzichelli’s home town of Paulsboro among them. (Pizarro/PolitickerNJ)

Read more at n response to Assemblyman John McKeon’s (D-27) query, Attorney General John Hoffman this afternoon said attorney’s fees for the State of New Jersey in the Exxon Mobil settlement would be around $40-45 million.

The corporate giant will pay $225 million for contamination of the Garden State in a deal secured by Hoffman, who this afternoon tok questions from the Assembly Budget Committee.

Hoffman told McKeon that the court will ultimately determine the precise amount. (Pizarro/PolitickerNJ)

MANCHESTER, N.H. – As New Jersey Governor and potential 2016 Republican presidential candidate Chris Christie went table to table during breakfast at Chez Vachon on Manchester, New Hampshire’s west side, he engaged diners over an issue that gives many Americans heartburn: the future of Social Security.

During his Tuesday morning speech at the New Hampshire Institute of Politics at nearby Saint Anselm College, Christie discussed raising the age for Social Security to 69, gradually implementing the proposed change starting in 2022 and increasing the retirement age by two months each year until it reaches 69. (Bonamo/PolitickerNJ)

A New Hampshire man who confronted Chris Christie about his role in the Bridgegate traffic scandal on Wednesday was mistaken about being stuck in the paralyzing September 2013 traffic jam in Fort Lee, New Jersey, he told POLITICO.

At a restaurant in Manchester, New Hampshire, where Christie was greeting potential voters on his tour of the Granite State, Richard Moquin claimed to have sat in the infamous traffic jam with his wife as they traveled to Manhattan to celebrate their wedding anniversary.

Turns out that wasn’t true. (Martel/Politico)

ATLANTIC CITY — Hours after wrapping up a trip to New Hampshire on Wednesday, Gov. Chris Christie was back in one of his home state’s most struggling cities — for a star-studded store opening where he drew cheers from well-wishers, and a few friendly boos from Philadelphia Eagles fans.

Christie was on hand in Atlantic City for the grand opening of a Bass Pro Shops fishing and outdoor megastore — an event officials say is a sign of hope for the troubled resort town. (Johnson/NJ.com)

Even as his name is scrubbed from the law firm he co-founded, David Samson’s association with New Jersey Governor Chris Christie can’t be so easily erased.

They forged their relationship more than a decade ago as prosecutors targeted by a street gang. When Christie was elected governor in 2009, Samson was transition leader before the Republican appointed him chairman of the Port Authority of New York & New Jersey, the agency that controls the region’s major airports, bridges and tunnels. (Young/Bloomberg)

Politico to Expand Coverage of States, Staring With New Jersey

Politico, the political website that started in Washington, is expanding its coverage of states, beginning with New Jersey and Florida.

Capital, a New York-based publication owned by the company and focused on state politics and the media, will be renamed Politico. Its senior staff — Josh Benson, Katherine Lehr and Tom McGeveran — will oversee the expansion into the states, Jim VandeHei, a Politico founder, said in a staff memorandum on Wednesday.

This year, the memo said, Politico will start a bureau in Trenton, which will offer “a mix of free and paid content for the state written by reporters with expertise and experience.” Shortly after that, the company will hire a team of political and policy writers in Tallahassee, Fla. Additional sites will follow. (Somaiya/New York Times)

John H. O’Brien, a state police lieutenant who was named director of the New Jersey medical marijuana program more than three years ago, has resigned.

O’Brien retired and his family is relocating, said Donna Leusner, a spokeswoman for the state Department of Health, in response to an e-mail asking for information on O’Brien’s April 4 resignation.

In a statement, O’Brien, 54, who was with the state police for 26 years, said he was “grateful for the opportunity to be a part of one of the more significant social changes in recent history.” (Hefler/Philadelphia Inquirer)

For the second straight year, Wyckoff resident Michael J. Epstein has been named a Top 100 New Jersey Super Lawyer, as shown in the April 2015 edition of New Jersey Monthly. (The Record)

Tax day a moment of truth for Obamacare subsidies

Wednesday was the end of the first tax season under new rules created by the Affordable Care Act, and some who received federal help to buy health coverage have been hit with an unpleasant surprise: They owe the government money — in some cases hundreds or even thousands of dollars. But the opposite is true for others: They’ll get bigger IRS refunds than they expected.

As the first full cycle of the health care law’s play-or-pay provision — requiring most people to have health insurance or pay a penalty — comes to an end, New Jerseyans have been affected in a variety of ways: (Washburn/The Record)

In its motion for dismissal, filed Tuesday, the city said the money was borrowed as “a direct result of the Plaintiff’s pursuit of a gigantic real estate tax refund.” (Santore/Press of Atlantic City)

The new figures reinforce the struggles of real estate markets battered by years of down local economies and a spate of New Jersey distressed properties delayed by previous backlogs and moratorium. (Ianieri/Press of Atlantic City)

Critics call these “bomb trains” because when they derail — as recent accident in Illinois shows — the oily fireballs can burn for days. In Teaneck, these trains pass playgrounds and power stations, schools and homes says the Hackensack Riverkeeper.

“There’s an entire neighborhood of people at risk that are sitting right next to the tracks. And it goes like all the way through Teaneck, into Bogota, all the way down through Newark,” said Hackensack Riverkeeper Capt. Bill Sheehan. (Flanagan/NJTV)

A North Jersey man was sentenced today to 28 months in prison for his role in the affairs of the Genovese organized crime family of La Cosa Nostra (the “Genovese family”), including engaging in a pattern of racketeering activity by extorting Christmastime tribute payments from members of the International Longshoremen’s Association (ILA), New Jersey U.S. Attorney Paul J. Fishman and Eastern District of New York U.S. Attorney Loretta E. Lynch announced. (PolitickerNJ) 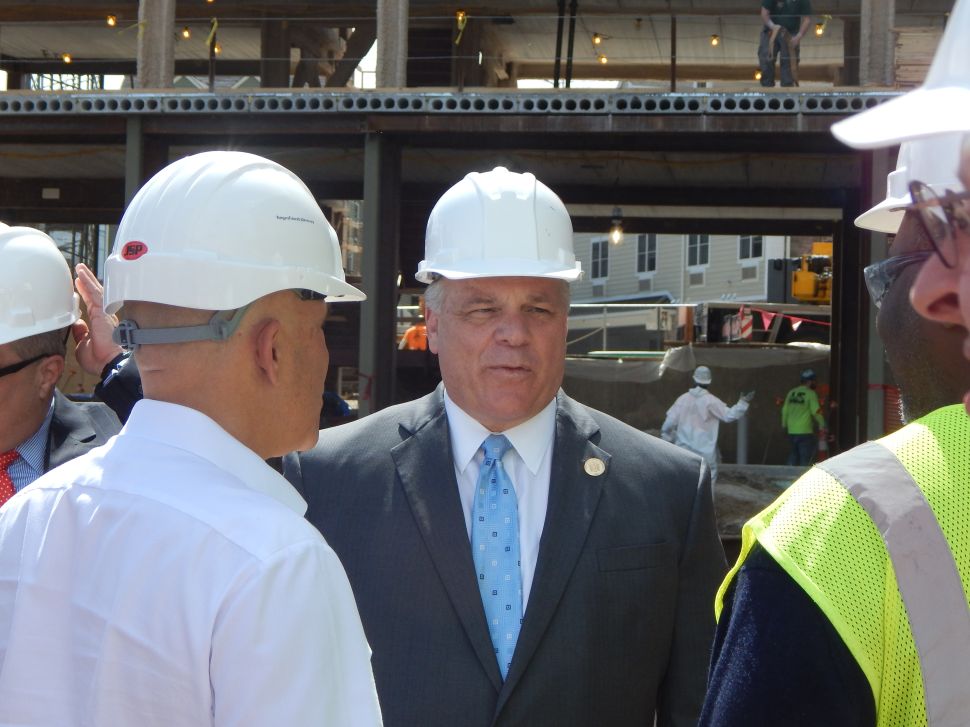