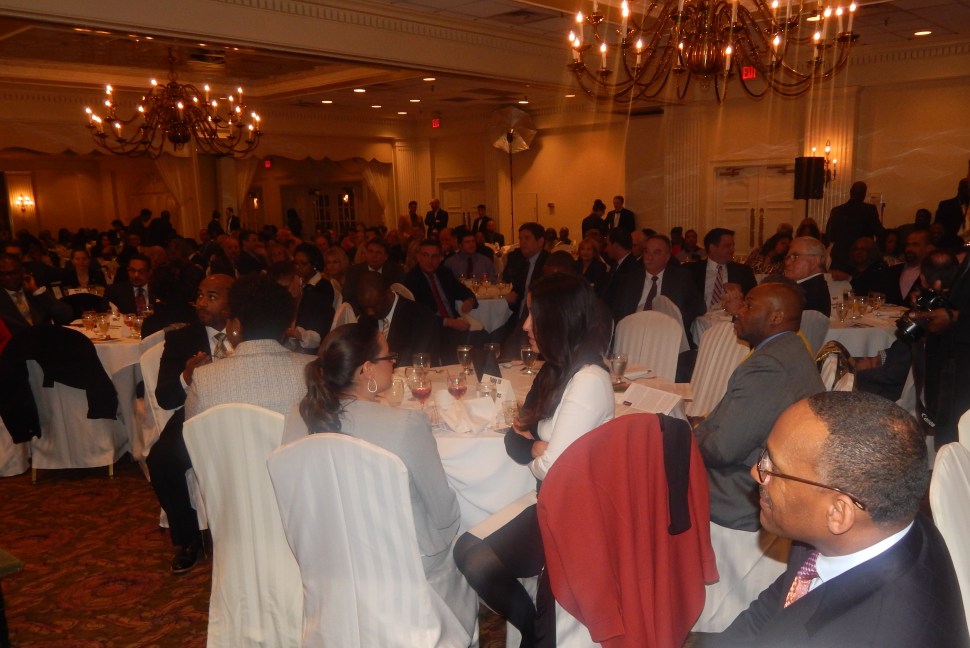 WEST ORANGE – Raspy voiced and congenial, an ex football jock turned insurance agency kingpin, John F.X. Graham takes the concept of family and extends it to incorporate party, in his case the Democratic Party, which he joined when he first John F. Kennedy in his home town of Philadelphia. (Pizarro/PolitickerNJ)

WOODLAND PARK — The star guest speaker of this year’s New Jersey Reagan Day Dinner was met with raucous applause tonight when he offered a scathing critique of President Barack Obama’s foreign policy, telling a crowd of some 1,000 Republicans gathered here that the Democrat’s presidency has been the “most damaging” to America’s reputation at home and abroad than any he’s ever seen.

“The way I look at it, I think this very climate we’re in right now, under the Obama administration, is perhaps the most damaging period since World War II,” said former Vice President Dick Cheney, commenting on the future of the Republican Party in the U.S. “The challenge we’re going to face is recognizing the nature of the threat. Recognizing that Barack Obama is taking the wrong action, find someone who’s willing to stand up and say that, and don’t mince words about it, and start by rebuilding our military.” (Brush/PolitickerNJ)

At Christie town hall in Kenilworth, issues discussed, in frustration, outside

KENILWORTH – Standing in the rain outside of Harding Elementary School on the Boulevard in Kenilworth, a woman in a Smurf-blue velour track suit squinted at the entrance, then asked a question many people waiting in the chilly spring rain couldn’t immediately answer. (Bonamo/PolitickerNJ)

Indiana Gov. Mike Pence swatted a hornet’s nest when he signed a bill that detractors say would allow Hoosier State businesses to deny services to gay and lesbian couples. Amid threats to boycott Indiana businesses and cancel conventions, Pence is, according to news reports, “working with legislators to amend the law and ‘clarify’ that it does not promote discrimination.”

Already, Salesforce.com said it would cancel its corporate travel there and hometown hero Bill Oesterle, the CEO of Angie’s List—a Republican who chaired Pence’s predecessor Mitch Daniels’ 2004 race— said that his crowd sourcing recommendation company will scuttle a deal with Indianapolis to expand its headquarters there. Even the rock group Wilco has canceled a show. (Sanders/PolitickerNJ)

Is old Rumana nemesis behind last-minute fracturing in LD40?

For a second there, it almost looked as if peace — or some form of it — had befallen Republicans in a historically-fractured 40th legislative district.

The operative word there, of course, is: almost.

With election season now begun in earnest, incumbent Assemblymen Scott Rumana (R-40) and David Russo (R-40) are not only going to face a primary challenge in June after all initial signs showed a smooth, unencumbered path to reelection earlier this year, but are also fighting to retain their ability to run on the party line, after the county organization’s normal nomination process was disputed in court by a Passaic County Republican committeeman from Paterson. (Brush/PolitickerNJ)

Gov. Chris Christie is bringing a slice of Iowa to New Jersey in June with the Republican holding a fundraiser for GOP Sen. Charles Grassley.

The New Jersey governor—and potential 2016 presidential candidate—plans to hold a breakfast fundraiser for Mr. Grassley in Bernardsville, N.J., on June 15, according to a schedule of Mr. Christie’s upcoming events viewed by The Wall Street Journal. (Haddon/Wall Street Journal)

It’s an interesting intellectual exercise, in part owing to the thorny relationship unions have with themselves in the typically transactional Garden State. There’s also the grassroots power of local labor unions versus the perceived top-down internationals. Given the complexity of labor’s power structure, we chose to cull players from all strata of the movement for an emblematic examination of labor influence more than a scientific power ranking. (PolitickerNJ)

The anti-abortion Susan B. Anthony List, in tandem with the conservative American Principles Project, has been asking Republican presidential hopefuls to take a pledge. One by one–either with preexisting legislation, or new statements–they have come aboard, and supported bans on abortions after 20 weeks. On Monday, New Jersey Governor Chris Christie gave the SBA List a statement of his support for a “Pain-Capable Unborn Child Protection Act which would protect unborn children beginning at 20 weeks.” (Weigel/Bloomberg)

Sweeney: No vote seen on AC bills without Christie support

TRENTON – New Jersey Senate President Steve Sweeney is insisting that Gov. Chris Christie voice support for a package of bills to aid Atlantic City and its casinos before they can be voted upon.

Sweeney hand-delivered copies of the bills — which still have not received final votes in the Legislature — to Christie’s office Tuesday. Afterward, he told The Associated Press he will not post them for final votes unless Christie indicates support, saying that emergency managers appointed by the governor have spooked Wall Street and led to costly credit downgrades for Atlantic City. (Associated Press)

Almost half of Florida Republicans are backing two candidates from the Sunshine State in the 2016 primary while Gov. Chris Chrisite, R-N.J., fades, a new poll shows.

The administration will spend $175 million less than planned for fiscal 2015 and $125 million less for the budget year that starts July 1, state Treasurer Andrew Sidamon-Eristoff told the Senate Budget Committee in Trenton on Tuesday. (Young/Bloomberg)

Christie pushes for teachers to sign on to pension, health benefit changes in town hall meeting

Governor Christie pushed teachers — a union key to his pension reform plan — to agree to benefits changes Tuesday as his administration argued in a court filing that a judge “fabricated a constitutional right to pension funding.”

Christie is working to overturn a Superior Court ruling that requires the state to adhere to a law he signed four years ago requiring increasing payments to the pension fund.

At the same time, Christie is pushing the public to back his plan to overhaul retirement benefits for all public employees, a plan that requires changes not only to pensions but to medical benefits. Changes in health care benefits will mean savings that can be applied to pensions, Christie has argued. (Hayes/The Record)

Ex-Islanders owner and the ex-chairman of N.J. sports authority bid $88M for Revel

A group of private businesses that are battling the owners of the bankrupt Revel casino in court say that an $88 million bid on the property is being made by former New York Islanders owner Howard Milstein and his business partner Carl Goldberg, the former chairman of the New Jersey Sports and Exposition Authority.

The Record reported on Saturday that Milstein and Goldberg would top the $82 million offer by real estate developer Glenn Straub of Palm Beach, Fla. (Brennan/The Record)

A different budget battle in New Jersey this year

Since Gov. Chris Christie first took office, Democrats who control the NJ Legislature have criticized his estimates calling them overly optimistic. That won’t happen this, but two political experts said having the governor and lawmakers agreeing on revenues could be a mixture of good and bad news for taxpayers. (McArdle/NJ101.5)

A different budget battle in New Jersey this year

WASHINGTON — When Chris Christie privatized New Jersey’s lottery two years ago, he said its new overseers would “modernize and maximize” the games.

Instead, a lottery once ranked among the nation’s top performers is now lagging for the second straight year, trailing its state income targets by $64 million seven months into the current fiscal year. Meanwhile, the company running it has spent hundreds of thousands of dollars to hire lobbyists and a public relations firm with close ties to the governor. (Horwitz/Minneapolis Star Tribune)

New Jersey’s high taxes, cost of living and overall malaise are coming back to bite it among retirees, according to a survey released last week. • The Garden State ranks as the sixth-worst state to retire, Bankrate.com found. And it could have been worse if the personal finance website graded the states using only pocketbook issues.

“If it wasn’t for the family, I wouldn’t be here because the taxes are too high,” said Peggy Brocco, 68, of Manchester. “I’m in a senior development, and I pay $8,200 in (property) taxes.” (Diamond/Courier Post)

Things have gotten so bad that the New Jersey Division of Consumer Affairs has launched a “Fighting Fraud” awareness program that will feature a series of seminars and presentations in every county in the Garden State.

“What we’re seeing is these scams aren’t going away, these criminals are becoming more and more sophisticated,” Steve Lee, acting director of a New Jersey Division of Consumer Affairs said at an event in Elizabeth on Tuesday. (Matthau/NJ1201.5)

UNION CITY – The Union City government released a statement Tuesday regarding a city official who pleaded guilty on the same day to federal corruption charges. (Bonamo/PolitickerNJ)

Nearly a month after the rumors of impending charges initially began, POLITICO reports today that an indictment in the federal corruption investigation of U.S. Senator Rob Menendez (D-NJ) is expected to drop Wednesday. More here. (Brush/PolitickerNJ)

The New Jersey Charter Schools Association (NJCSA) today announced the addition of former New Jersey Senator and current Dean of the Education School at Saint Peter’s University Joseph V. Doria to its Board of Trustees. (Pizarro/PolitickerNJ) 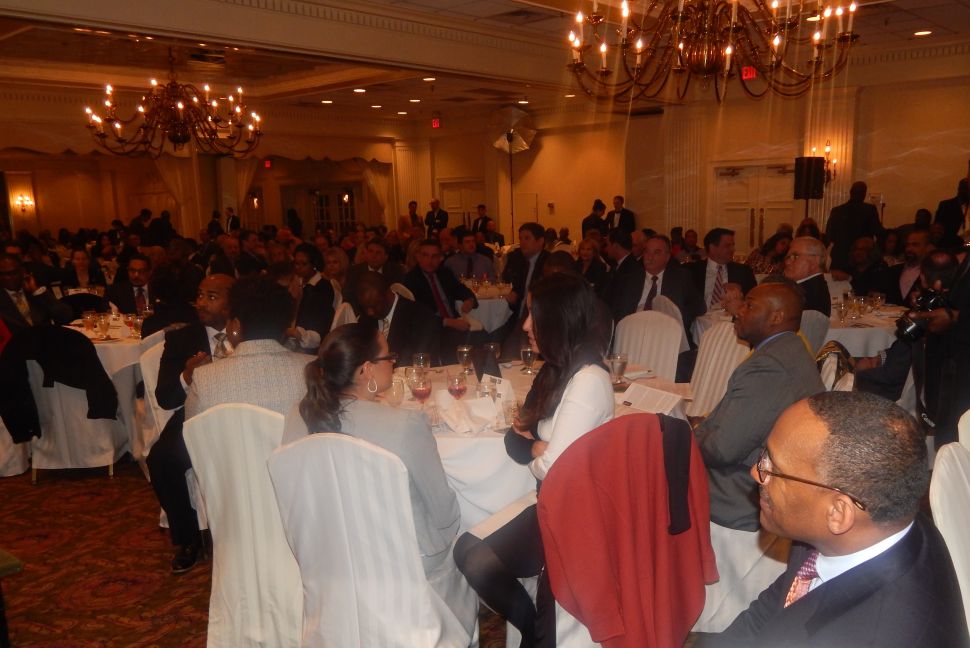