NEWARK – In typical Jersey composite fashion, they pushed the tables together in a Taste of Portugal and paid homage to a son of Ireland, the late Ray Durkin, a Democratic State Party Chairman who died last year and left a legacy of both dry-witted hilarious humor and had-nosed winning political strategy.

Find out where the parade is and jump in front of it, Durkin told his acolytes. (Pizarro/PolitickerNJ)

Suspended between indictments and in search of a place called trust

Two big city New Jersey mayors sat at a bar in Washington, D.C. on the annual Chamber of Commerce trip a few years ago and considered the question thrown their way by PolitickerNJ. (PolitickerNJ Editor)

Known for his contentious responses to New Jersey residents’ questions during his more than 100 town hall meetings back in the Garden State, Christie faced off against a packed crowd of more than 100 people jammed inside of Shooters Sports Pub in Exeter, New Hampshire, some of whom seemed less than receptive to his message. (Bonamo/PolitickerNJ)

Republicans and Democrats on the Assembly Budget Committee seem largely in agreement over whether the state’s latest credit downgrading is bad for the economy, and even what motivated it — but when it comes to dishing out the blame, opinions diverge predictably. (Brush/PolitickerNJ)

NASHUA, N.H. – Speaking at the First in the Nation Republican Leadership Summit on Friday, New Jersey Governor and potential 2016 Republican presidential candidate Chris Christie talked about topics that he has brought to the forefront during his visit to the key primary state, as well as issues that followed him from home. (Bonamo/PolitickerNJ)

MANCHESTER, N.H. – New Jersey Governor Chris Christie reacted after Moody’s Investor Service downgraded New Jersey’s credit rating on Thursday with a view that the rating agency had essentially concurred with his own conclusions.

“My reaction is that I’m glad that Moody’s agrees with me,” said Christie, a potential 2016 Republican presidential candidate, as he left the “Made in New Hampshire” Expo in downtown Manchester on Friday morning. “If you look at [the Moody’s report], what it says is that if we fix the pension problem, the problem would be fixed.” (Bonamo/PolitickerNJ)

As the Star-Ledger reported this morning, the NJGOP spent nearly a quarter million dollars on private jets in January, “accounting for half of the money it spent in the last three months,” according to ELEC reports. PolitickerNJ can now report that Gov. Christie was sufficiently worried about this eyebrow-raising figure that he warned the GOP chairmen that the number was coming. (Sanders/PolitickerNJ)

A former top official of the International Longshoremen’s Association — one of three indicted in an investigation into criminal activities  at the Port of New York and New Jersey — was sentenced to prison on charges that he participated in a scheme to extort money from dock workers by demanding “tribute” for better jobs and wages, Acting Attorney General John Hoffman announced today.

Nunzio LaGrasso, 64, of Florham Park – the former secretary-treasurer of ILA Local #1478 and former vice president of the Atlantic Coast District of all ILA locals – was sentenced today to six years in state prison by Superior Court Judge Robert J. Gilson in Morris County, the AG’s office said. He pleaded guilty on Jan. 23 to a second-degree charge of conspiracy to commit commercial bribery and money laundering. (Brush/PolitickerNJ)

With legislative races across the state beginning in earnest, the Democrats Assembly Campaign Committee out-raised its Republican counterpart in the first quarter of this year’s election season, according to campaign finance reports released today. (Brush/PolitickerNJ)

Love him or hate him, Christie makes waves on N.H. trip

BEDFORD, N.H. and MANCHESTER, N.H. – Sitting over breakfast on Thursday in the Red Arrow Diner in downtown Manchester, New Hampshire, local resident Dave Willis liked the taste he got of Chris Christie as the New Jersey governor and potential 2016 presidential candidate visited the state this week. But he was unsure if Christie would ultimately be picked by voters from the Republican primary candidate menu. (Bonamo/PolitickerNJ)

New Jersey Governor Chris Christie’s approval rating has fallen to an all-time low as he prepares for a likely presidential campaign, according to a Quinnipiac University poll published Monday. (Elkin/Bloomberg)

MANCHESTER, N.H.—He kissed babies at a pizza place, attacked his potential Republican rivals and shook hands down a line of those gathered for free Ben & Jerry’s ice cream.

After months of questions about whether sagging poll numbers and a pending federal probe would abort his possible presidential bid, Gov. Chris Christie started looking like a candidate. And he brought a bit of Jersey to the first-in-the-nation state while doing it. (Haddon/Wall Street Journal)

Best Applause Line: Many to choose from, but “I didn’t run for governor of New Jersey to be elected prom king” got the most love.

Crickets: None. The crowd was engaged throughout. (Haberman/The New York Times)

WASHINGTON (AP) – Hillary Rodham Clinton will try to recapture the magic of her come-from-behind victory in the 2008 New Hampshire primary as she returns to the state that gave her first presidential campaign a second wind.

Clinton again arrives in New Hampshire as the leading candidate for the Democratic nomination. This time, she faces little opposition. Nevertheless, her campaign is determined to show early-state voters that Clinton is not taking that position for granted. (Lerer/Associated Press)

New Jersey grapples with how, whether to regulate Uber, Lyft

TRENTON, N.J. (AP) – Ride-hailing companies like Uber and Lyft could be driven out of New Jersey if a bill lawmakers are considering becomes law.

Crime down across New Jersey in ’13

The rates of crimes like murder, rape and robbery dropped in Ocean and Monmouth counties from 2012 to 2013, according to a report released Friday on data from 2013 by the New Jersey State Police.

The overall crime rate for the state in 2013 was the lowest in five years, with 21.8 crimes for every 1,000 residents. Violent crime dropped by 1 percent and nonviolent crime dropped 8 percent from 2012 to 2013. No police officers were killed in the line of duty; 2,163 were assaulted on the job.

Here are some of the highlights: (Ford/Asbury Park Press)

Its former owner cut staff to the bone and let the sprawling complex deteriorate so badly that New Jersey gambling regulators stripped it of its casino license. (Parry/Associated Press)

Read more at Those among the 708 people who attended Tony Monteiro’s and Giuliano Farina’s LD20 fundraiser at the Pines in Edison noted good turnout by those allies of the political operation otherwise known as the Elizabeth Board of Education. (Pizarro/PolitickerNJ)

Fulop, of course, is an incipient 2017 candidate for governor. So is Murphy. As long as Fulop – mayor of the biggest city in Hudson – runs for governor, Murpy can expect not to compete for the support of the HCDO. The question is whether he intends to play now to pickpocket support where he can, or decides simply to leave Hudson alone rather than antagonize. (Pizarro/PolitickerNJ)

There is increasing vocalized speculation within the New Jersey Republican Party about the possibility of Gov. Chris Christie leaving open a self-appointment to a United States Senate seat in the event that the seat becomes open. U.S. Senator Bob Menendez (D-NJ) faces a 14-count indictment and, according to veteran criminal defense attorney Joe Hayden, a “fighting chance” at trial. (Pizarro/PolitickerNJ)

MANCHESTER, N.H. – During a critical trip to New Hampshire that could shape the fate of his potential 2016 Republican presidential bid, New Jersey Governor Chris Christie has faced a flurry of questions from residents and reporters. But in a state where many campaigns have gone off the tracks, Christie dodged a cuisine-based derailment.

New Jersey prides itself on being the homeland of some of America’s best pizza. Dedicated devotees of certain cherished pizzerias will allow no disrespect for their favorite spots. (Bonamo/PolitickerNJ) 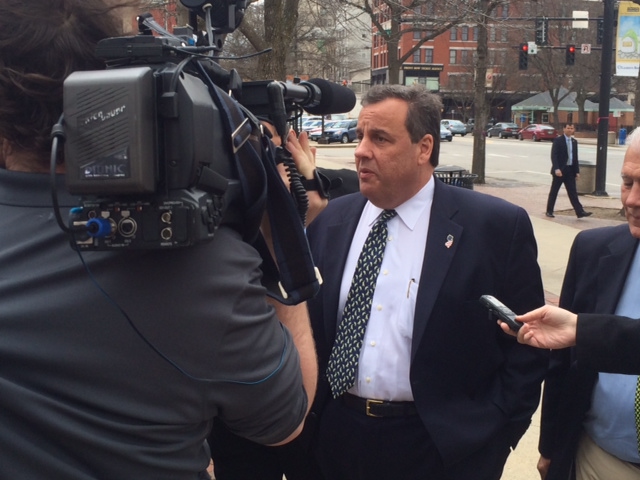