Former Governor Kean, feted at 80th birthday party, on N.J. politics: “We’ve got to clean up our act”

NEWARK – In the midst of his 80th birthday soiree at the downtown Newark arts center he was instrumental in building, former New Jersey Governor Tom Kean, noted for his public service, served notice to the state’s troubled political world. (Bonamo/PolitickerNJ)

From the “Where Are They Now” bin comes a story that reveals a strange quirk. By January 2017, one of the most prominent New Jersey Republicans on the national scene could very well be a guy in West Virginia.

West Virginia Sen. Joe Manchin will not be running for governor in 2016, according to a Facebook posting by the West Virginia Democratic Party. An item in Politico’s “Morning Score“ this morning noted that this is good news for national Democrats hopes to regain the majority in the US Senate in either 2016 or 2018 when the popular Mountain Stater runs again. But his decision not to run for Governor opened up an opportunity for Republicans who hope to succeed Democrat Earl Ray Tomblin, who became acting governor when Manchin ran for Senate and then won two terms on his own. (Kurson/PolitickerNJ)

Wisconsin Gov. Scott Walker saw his approval rating drop last week to 41 percent, among the lowest its been since taking office back in 2010. Louisiana Gov. Bobby Jindal’s support at home consistently dips below a third, making the Republican one of the least popular sitting governors in the country. (Brush/PolitickerNJ)

Bridgegate indictments might come, but will N.J. politics change?

A legal sword of Damocles hangs over New Jersey’s body politic as sources have told PolitickerNJ that indictments are expected soon regarding the 2013 access lane closures at the George Washington Bridge, a.k.a. Bridgegate, which could ensnare aides and allies in Governor Chris Christie’s administration.

Recent weeks have seen Bob Menendez, a powerful Democrat who is New Jersey’s senior U.S. Senator, get indicted on one set of federal corruption charges while former Bergen County Democratic Chairman Joe Ferriero was convicted on another set. And there is a long litany of New Jersey politicos, Democrat and Republican, whose historical hijinks have leached enough ethical toxicity into the soil of the Garden State to transmute it into what many observers see as the Gangster State.

So PolitickerNJ, surveying this stricken scene, asked around to find out if any new indictments will change the way politics are practiced in New Jersey, or will the proverbial sword of Damocles prove to have an effect as dull as a butter knife. (Bonamo/PolitickerNJ)

With a second court battle over the state’s failure to put up a full payment into its public pension and benefits system pending,  Democratic leaders of the legislature are looking to send the judge presiding over the case a statement that they’re on the side of the plantiffs. (Brush/PolitickerNJ)

Can Chris Christie Stanch the Bleeding?

To put it mildly, this is not the presidential campaign Chris Christie would have envisioned for himself.

No wonder the New Jersey governor and one-time Republican rock star is heading to Washington D.C. on Tuesday. At the State Department, where he’s scheduled to deliver a foreign policy speech at the Washington Conference on the Americas, he’ll get a break from Monday’s double barrel shot of bad news on the home front: The defection of a longtime political ally and personal friend to a political rival and a Quinnipiac poll showing him with a record-low approval rating of 38 percent in his state.  (Knowles/Bloomberg)

As Gov. Christie pitches himself nationally as a straight-talking leader, fewer New Jersey voters than in the past are associating him with certain positive traits, according to a Rutgers-Eagleton poll released Tuesday.

Asked how well trustworthy described the Republican governor, for instance, 17 percent of the state’s voters said “very well” – a decline from 22 percent in October and 27 percent in January 2014, after the scandal over the George Washington Bridge lane closures broke. (Hanna/The Philadelphia Inquirer)

Fares for most riders would increase about 9 percent under a New Jersey Transit proposal announced on Monday in an effort to close a large budget gap at the agency.

Service on several rail and bus routes would also be reduced under the plan.

The agency’s board of directors is expected to vote on the plan at its July 8 meeting after a series of public hearings. The fare increase would take effect on Oct. 1, and the service reductions would happen in September. (Fitzsimmons/New York Times)

Today, let’s talk about what I have decided to call time-bomb bonds: securities that blow up in the issuer’s face years or decades after being sold to investors.

The case in point: $1.14 billion of pension bonds that my home state of New Jersey sold in 1997, securities that I came across while working with Cezary Podkul of ProPublica for an article about New Jersey’s finances that was published Saturday by The Washington Post. (Sloan/Washington Post)

New Jersey’s black, Hispanic, and mixed-race children are much more likely than Asian and white children to live in poverty, suffer poor health, struggle in school, and to become involved in the state’s child protection system, according to a new Kids Count 2015 report released Monday by Advocates for Children of New Jersey.

The annual report compiles statistics on key indicators of child well-being and ranks counties according to their performance. (Mulford/Courier Post)

New Jersey’s second-in-command will help send off about 1,200 Raritan Valley Community College students when they get their degrees next month.

Lt. Gov. Kim Guadagno will deliver the commencement address 10 a.m. May 16 at the ceremony on the soccer field of the college’s Branchburg campus, 118 Lamington Road.

She will also receive an honorary degree, according to a news release. Guadagno is in her second term as lieutenant governor. She leads Gov. Chris Christie’s administration’s efforts to improve the state’s economy. (Peters/The Express-Times)

Acting Commissioner Elizabeth Connolly said at an Assembly budget hearing that the KPMG report, at a cost of $850,000, will be used by Xerox to develop the new process.

The state ended a $118 million contract with Hewlett-Packard last year over missed deadlines and took a $15 million loss on the contract, Connolly said. (Associated Press)

A federal judge on Monday said Revel’s bankrupt corporate parent can shed leases it had with gourmet restaurants and other tenants of the resort, setting the stage for another legal battle to sort out their rights to space at the beachfront property. (Kramer/Press of Atlantic City)

The Chelsea in Atlantic City hopes to hire nearly 100

If you’re looking for a job, The Chelsea in Atlantic City says it has almost 100 of them to fill through a job fair set for Wednesday afternoon.

Another morning, another two polls sizing up Christie’s NJ skid

State Senator Joe Kyrillos (R-13) isn’t the only one.

According to Fairleigh Dickinson University’s PublicMind Poll, Christie’s approval numbers remain unchanged from late February, the last time voters were asked their opinion about his job performance. Right now a third (36%) say they approve of the governor, with an even half (50%) who disapprove. A little over a month ago the numbers were virtually the same – upside down with disapproval (51%) higher than approval (35%). (Pizarro/PolitickerNJ)

State Senator Joe Kyrillos (R-13) is backing former Florida Governor Jeb Bush for president, according to a report in the Washington Post.

From the Post’s Robert Costa: “As New Jersey Gov. Chris Christie tries for a political revival with New Hampshire town halls and Iowa diner stops, he won’t have one of his longtime friends and political advisers at his side.” (Pizarro/PolitickerNJ)

A Christie administration contract will pay Ernst and Young – which employs the governor’s brother Todd – more than $250,000 to provide financial analysis of Atlantic City.

Founded in 2011 by Matthew Krayton, PubliticsPR+Digital is a public relations, strategic communications and creative firm that specializes in developing innovative messaging campaigns for clients across sectors. (Pizarro/PolitickerNJ)

Coming off a two-day tour of the first-in-the-nation primary state of New Hampshire, Gov. Chris Christie is returning to his town hall schedule at home — holding his 136th public forum on Thursday at the Essex County College Police Academy in Cedar Grove, NJ.

On Friday, Christie close his NH tour out with a town hall held in a local bar. (Brush/PolitickerNJ)

In a race that looks like it’s decidedly hers to lose, could Hillary Clinton face competition for the Democratic nomination in 2016 after all?

The answer might be yes, according to a report this morning in the New York Post — and the challenge could come from an a former Clinton underling she helped vault to his current post across the Hudson. Crediting an anonymous “national party operative,” the Post writes that New York City Mayor Bill de Blasio is positioning himself as the progressive alternative to the former secretary of state ahead of the 2016 primaries. (Brush/PolitickerNJ) 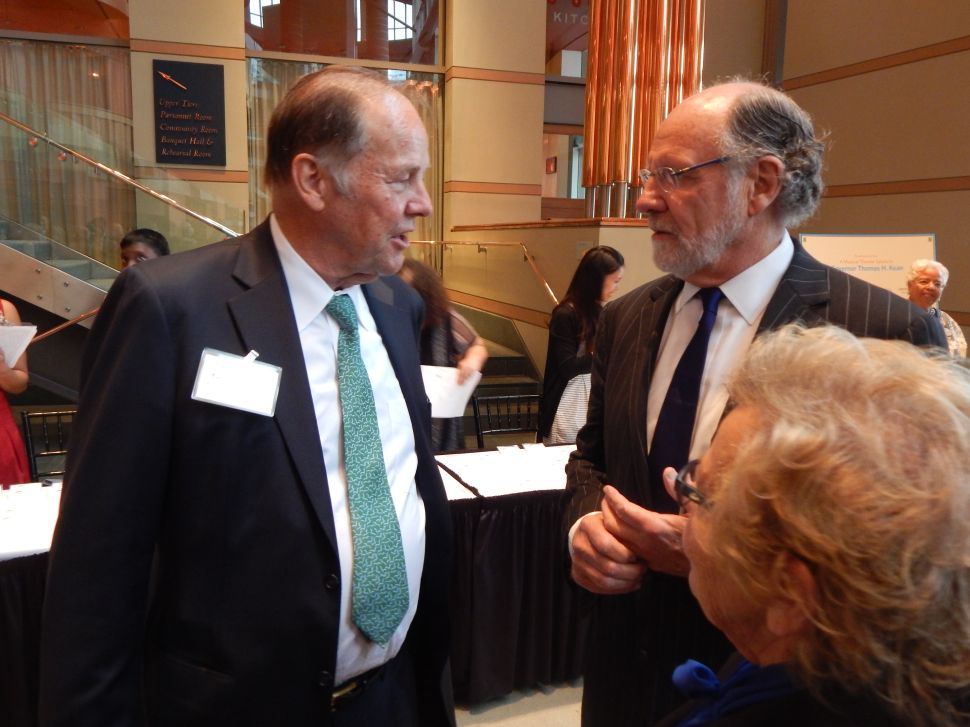