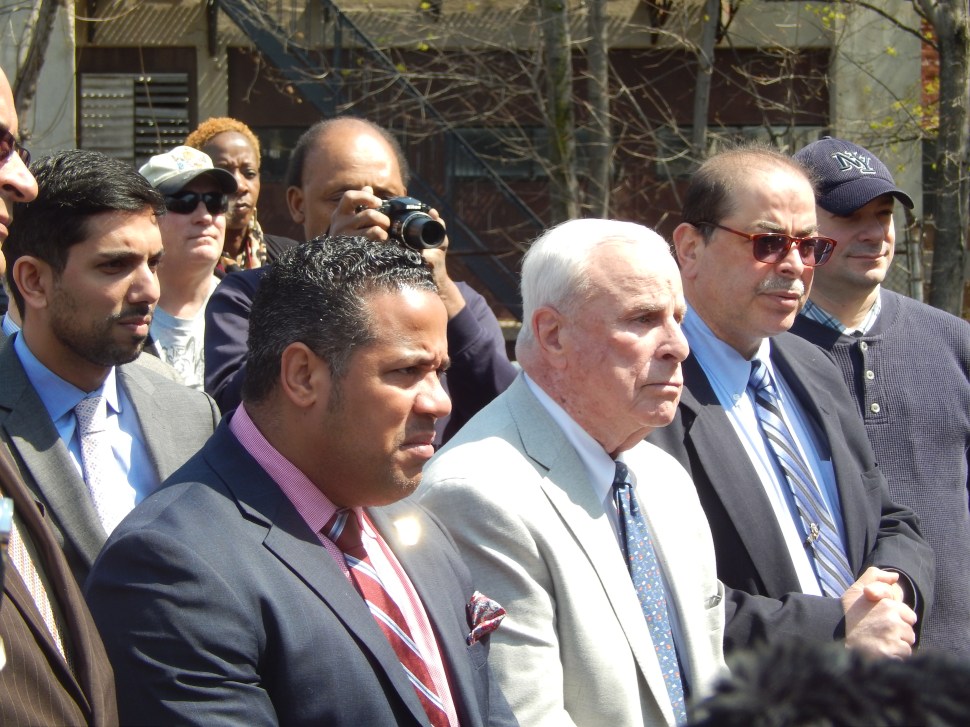 Governing in Local Hell: Board of Ed Prez Amin won’t back down amid a hail of jeers

ELIZABETH – An ancient slugfest continued with a brutal campaign that spilled over into a post-election season maelstrom of emotions born of bad intentions, an old battle with a fresh target: Board President Ana Maria Amin, a City Hall ally of convenience in 2014, gone rogue in 2015. (Pizarro/PolitickerNJ)

Governing in Local Hell: Board of Ed Prez Amin won’t back down amid a hail of jeers | New Jersey News, Politics, Opinion, and Analysis

NEWARK – The “Children First Team” slate backed by Newark Mayor Ras Baraka swept to victory in the Newark Public Schools Advisory Board election on Tuesday, with each candidate winning a three-year term. (Bonamo/PolitickerNJ)

In Bramnick, Christie still has a staunch defender

It’s only Tuesday, and already this has been a very bad week for Gov. Chris Christie.

The prospective presidential candidate returned from a two day retail politicking tour of the first-in-the-nation primary state of New Hampshire last week only to be met by a barrage of bad news at home. On Monday morning, Quinnipiac University released a poll that found him sinking to new lows among voters in the Garden State, with just 31 percent saying they approve of the job he’s doing compared with a whopping 56 who say they don’t. This afternoon, the New Jersey Education Association — the massive teacher’s union with which he was supposed to be working on a new round of pension reform and with which he brandished “unprecedented accord” at his latest budget address — announced they were backing out of talks with the Republican’s administration on the issue. (Brush/PolitickerNJ)

TRENTON – The head of New Jersey’s largest public workers union made it clear after a review of the legal history of the ongoing court battle over the future of the state pensions and benefit program that the union’s position is not up for review. (Bonamo/PolitickerNJ)

“It’s very disturbing,” Torres said of the federal prosecution of Menendez on corruption charges. “I’m going to say it was a witch hunt.” (Pizarro/PolitickerNJ)

PATERSON – A table crammed with male Democratic Party insiders last week considered the presidential candidacy of Hillary Clinton with all the enthusiasm of a confab of mediating Buddhist monks.

Blank or sublimated distressed stares met the mere mention of the name. (Pizarro/PolitickerNJ)

‘Show us the money’: Bramnick and Prieto go at it over pension problems

UNION — Assembly Minority Leader Jon Bramnick (R-21) said today that he is puzzled by the legislature’s Democratic leadership’s decision to submit an amicus brief with the Mercer County Superior Court in support of public unions in their legal battle over the state’s failure to fund its pension and benefit system, asking why they haven’t offered up a plan themselves to solve the problem in Trenton. (Brush/PolitickerNJ)

Bramnick to Dems on pension issue: ‘Show us where the money is’ | New Jersey News, Politics, Opinion, and Analysis

In a rollicking press release today that is either penetratingly witty or downright distasteful, depending on what side of the aisle you’re on, Assemblyman Declan O’Scanlon (R-13) “praised” the “miraculous efforts” of the house’s top Democrats for proposing a plan to solve the state’s gaping budget shortfall and public pension crisis. Full of adjectives like “joyful” and “ebullient”, the Republican thanked Senate President Steve Sweeney (D-3) and Assembly Speaker Vinnie Prieto (D-32) for finding the money to fix the state’s fiscal issues somewhere “down in the basement of the statehouse.” (Brush/PolitickerNJ)

New Jersey Gov. Chris Christie on Tuesday called for the U.S. to “take another look” at the North American Free Trade Agreement.

Mr. Christie, who is considering launching a 2016 presidential campaign, didn’t offer specifics about how he’d seek to alter the 1994 trilateral trade deal, but he would hardly be the first White House contender to propose changing it. (Epstein/Wall Street Journal)

A state politician giving $10,000 to a super PAC for a presidential candidate is hardly unusual. But news of New Jersey Sen. Joe Kyrillos giving that sum to a group supporting Jeb Bush earlier this year surprised many in New Jersey.

Mr. Kyrillos and Gov. Chris Christie were once close friends. Mr. Christie set up the longtime state senator with his future wife. In 2009, Mr. Kyrillos headed Mr. Christie’s gubernatorial election campaign and later called the Republican governor one of his political heroes. The other was President Ronald Reagan. (Dawsey/Wall Street Journal)

Maybe New Jersey voters aren’t so opposed to an increase in the gas tax.

A new Quinnipiac University poll finds 50% would agree to a gas tax to fund road improvements and mass transit, while 47% are opposed to the tax.

The poll marks the first such Quinnipiac survey that shows support for a gas tax, according to its authors. In January, a poll showed New Jersey residents were overwhelmingly opposed to the tax. (Dawsey/Wall Street Journal)

So, this is awkward.

Jim Marchese, the provocateur from “The Real Housewives of New Jersey,” last year secured $8.5 million for his mortgage company after blowing the whistle on what he believes was widespread wrongdoing at Bank of America Corp.BAC -0.45%

Around the same time, his co-stars Joe and Teresa Giudice were sentenced to prison after pleading guilty to, among other things, mortgage-related fraud.

Mr. Marchese, known for being blunt and brash, is characteristically outspoken about the Giudices: He wants them off the show. Keeping them on, he said, might generate buzz but will only glorify their crime. (Rexrode/Wall Street Journal)

At an unveiling this morning of the Paterson Great Falls National Historical Park’s new Welcome Center and gift store, Paterson Mayor Jose “Joey” Torres made a point of paying tribute to two retired Paterson politicians, both of whom were in attendance. (Pizarro/PolitickerNJ)

Amoroso was a founding partner of Nowell Amoroso Klein Bierman, P.A. The move is effective May 11, 2015. (Pizarro/PolitickerNJ)

The initial slate of endorsees included U.S. Rep. Bonnie Watson Coleman (D-12), who will receive thousands of dollars of support for her campaign from the PAC. (Pizarro/PolitickerNJ) 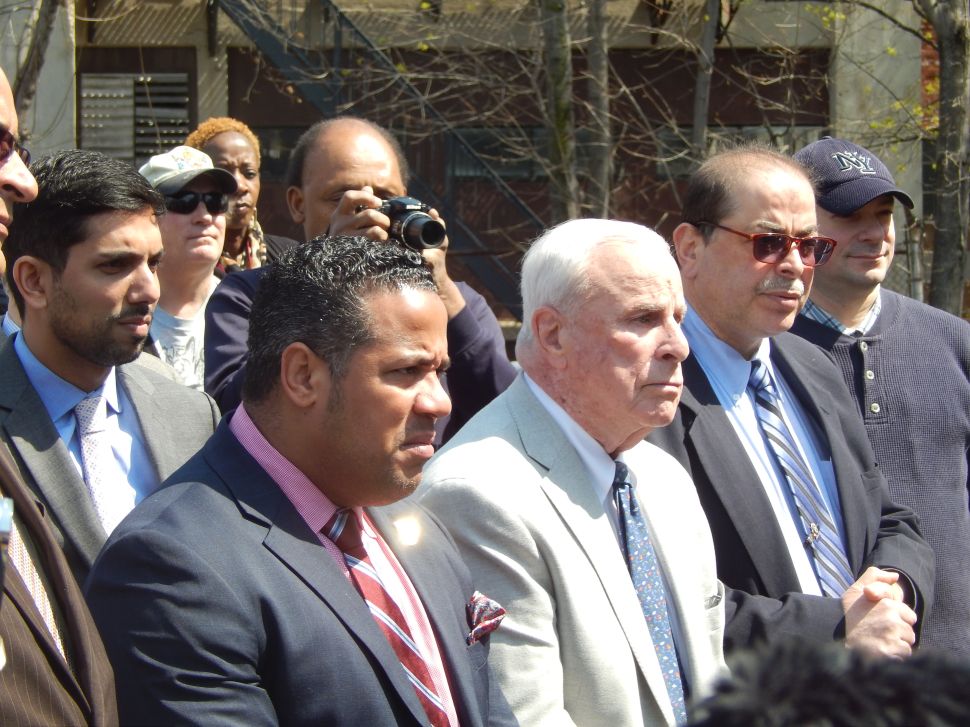