TRENTON — Leaning back in a leathery chair in his statehouse office, Senate President Steve Sweeney (D-3) says it was his father who first taught him how to embrace personal and political differences between people. “He always taught me to be happy for someone when they do well, don’t begrudge somebody because they got something that you wanted,” the 55-year-old Democrat says. Now in his sixth year as leader of the legislature’s upper chamber — and 13th since arriving in Trenton a little-known iron worker from South Jersey — Sweeney has carried that philosophy with him, working to apply it in his dealings with ideologically dissimilar parties on issues crucial to the state. His job, as he plainly puts it, is “not to be an obstructionist.” It is, rather, to “bring people together.” (Brush/PolitickerNJ)

HACKENSACK – Braced against the federal corruption charges filed against him, U.S. Senator Bob Menendez (D-N.J.) stood up to a bracing breeze at the Bergen County commemoration of the 100th anniversary of the Armenian genocide and criticized President Barack Obama’s handling of the issue. (Bonamo/PolitickerNJ)

Some Groups Cool on Christie

Gov. Chris Christie worked hard to win endorsements of blacks and Latinos in his re-election campaign and has frequently touted his inroads in minority communities in the buildup to a potential presidential run. (Dawsey and Haddon/Wall Street Journal)

NJ’s long term jobless rate among highest in the nation

New Jersey had one of the highest rates of long-term unemployment in the nation in 2014, even as the state job market slowly improved, figures released last week showed.

The percentage of the state’s workforce out of work for 15 weeks or more in 2014 — on average, 3.8 percent — was higher than all but six states, according to the U.S. Bureau of Labor Statistics. The national long-term jobless rate was 3 percent. New Jersey’s rate tumbled from an average of 5.1 percent in 2013. (Morely/The Record)

CAMDEN —  Camden County police led the state last year in the number of excessive-force complaints, according to a newspaper analysis.

The county force took over policing duties in Camden in May 2013, and The Philadelphia Inquirer (http://bit.ly/1GwZOzK) reports that 35 excessive-force complaints were filed for the remainder of that year. (Associated Press)

Given the economic challenges facing the region, residents have been asking that all levels of government tighten their belts, including county government. (Brunetti/Press of Atlantic City)

NEWARK – Several high-ranking figures in the 2016 presidential campaign of Democrat Hillary Clinton descended on downtown Newark on Thursday night to begin laying out their plan of attack before a room packed with New Jersey Democratic power players, according to a high-level Democratic source who was in the room. (Bonamo/PolitickerNJ)

First Lady Mary Pat Christie has quit her Wall Street job, according to the governor’s office.

“Mrs. Christie has decided to take a hiatus from her work in the finance world to spend more time with her family and young children,” Christie Spokesman Kevin Roberts said, according to published reports.

Christie resigned her position as a Managing Director at Angelo Gordon. (PolitickerNJ)

Before you head out for the weekend, make sure to read or re-read the following offerings from this week’s PolitickerNJ: (Pizarro/PolitickerNJ) 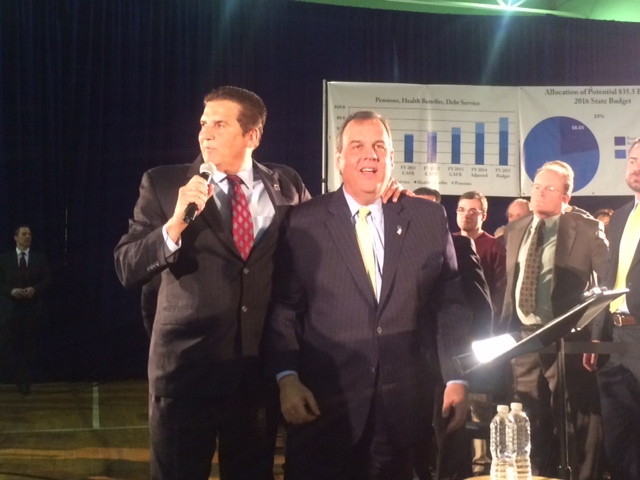