NEWARK – Following his federal court appearance this afternoon, U.S. Senator Bob Menendez (D-NJ) made his way down the front steps and positioned himself at a podium in front of reporters.

“As I said yesterday, these allegations are false,” said Menendez, who stood beside his attorney Abbe Lowell. “I am confident they will be proved false. I look forward to proving it in court.” (Pizarro/PolitickerNJ)

NEWARK — U.S. Senator Bob Menendez (D-NJ) and the man he stands accused of using his office to illegally benefit both strode silently with their posses into a courtroom at the U.S. District Court today for the first hearing in a federal corruption case that has rocked the New Jersey political scene.

Menendez and Salomon Melgen, the Florida eye doctor whom allegedly donated nearly $1 million worth of gifts and campaign donations to the ranking Democrat in exchange for personal and business interest benefits, both pleaded not guilty to the 14-count indictment handed down by the Justice Department yesterday. (Brush/PolitickerNJ)

Read more at NEWARK – Making his first appearance in court since absorbing a 14-count indictment on corruption charges yesterday, U.S. Senator Bob Menendez (D-NJ) moments ago arrived and entered the downtown federal building amid the clamor of cordoned off cameramen and assorted media types chronicling his every wordless move.

Striding briskly up a corridor of press, Menendez made his way inside with his attorney Abbe Lowell. (Pizarro/PolitickerNJ)

SOMERSET — The Somerset Republican Organization’s annual Lincoln Day Dinner on Wednesday night was mostly about paying tribute to the party’s early conservative hero, but there was a moment amid the idol worship and wining and dining that showed there was something else –something more timely — on the minds of guests in attendance.

“Is the PolitickerNJ guy still here? I do have one little announcement. One tiny little announcement,” cracked a whimsical Lt. Gov. Kim Guadagno, who took the stage in pink sweater to begin the night’s proceedings. “But that’s not what you think I’m going to say. I’m not going to say that. I’m not even going to comment on that because that would be too much fun. (Brush/PolitickerNJ)

Sen. Bob Menendez pleads Not Guilty to All Charges

NEWARK, N.J.—Sen. Robert Menendez pleaded not guilty to corruption charges including bribery Thursday, the day after he was indicted by a federal grand jury. Prosecutors say the New Jersey Democrat accepted nearly $1 million in gifts and campaign contributions from a Florida eye doctor in exchange for political favors.

“These allegations are false and I am confident they will be proven false,” Mr. Menendez said in a brief statement at the federal court in Newark. “I look forward to doing so in court.” (Dawsey and Grossman/Wall Street Journal)

Was it friendship or bribery? Menendez case may be hard to prove

Sen. Michael Bennet will give $10,000 to charity, an amount equal to campaign contributions the Colorado Democrat received from a political action committee associated with Sen. Robert Menendez several years ago, POLITICO has learned. (Everett/POLITICO)

LIVINGSTON, N.J.—While many Republicans are wondering if New Jersey Gov. Chris Christie will enter the 2016 race for president, his former high-school classmates have a more immediate question: Will he attend their 35th-anniversary reunion?

Mr. Christie has been a devoted member of Livingston High School’s class of 1980, helping to organize reunions before he became governor and keeping up with his classmates through Facebook. (Haddon/Wall Street Journal)

A group of technology entrepreneurs and former Mitt Romney donors will throw a fundraiser for New Jersey Gov. Chris Christie’s political-action committee in Virginia in May.

The event has 22 co-hosts, according to the invitation, and constitutes one of the larger events for the potential Republican presidential candidate’s PAC as he seeks to regain momentum in the crowded 2016 field. (Haddon/Wall Street Journal)

Where are your education dollars going in New Jersey?

The data shows $8,588 dollars a year is used for classroom costs including teacher salaries, books and supplies, while the rest goes for staff pensions and benefits, administrative costs, debt service, operational costs and transportation.

Lindsey Burke, an education policy fellow at The Heritage Foundation, believes it’s a system that appears to be spiraling out of control. (Matthau/NJ101.5

Where are your education dollars going in New Jersey? |

Sen. Bob Menendez made his first appearance in court today one day after his indictment on federal bribery charges and pled not guilty on all 14 counts against him.

His alleged co-conspirator, Dr. Salomon Melgen of Florida, also pled not guilty on all counts. (Aron/NJTV)

Transportation Commissioner: Fund Will Be Broke Next Year

Ferriero decides not to testify in his racketeering trial

At the beginning of Joseph Ferriero’s trial on racketeering charges, his lawyer had promised jurors that the former power broker would take the stand in his own defense and “tell you who, what, where and why the government’s evidence is wrong, and doesn’t make sense.”

In sum, Ferriero’s lawyer said, they would hear from Ferriero himself that he was simply a guy trying to make a living and not, as federal prosecutors claim, someone who once used his position as head of the Democratic Party in Bergen County to enrich himself through a series of bribery and extortion schemes. (Sampson/The Record)

CAMDEN — Three years to the day after Atlantic City’s $2.4 billion Revel casino opened — and seven months to the day after it closed — a bankruptcy court judge on Thursday approved its sale to a Florida developer for about 4 cents on the dollar.

Judge Gloria Burns approved the deal, which did not address the rights of former business tenants at the casino to operate there when it reopens. The approval came after Glenn Straub’s Polo North Country Club agreed to drop its demand that the sale go through “free and clear of encumbrances” like the tenants’ leases — an issue that had helped scuttle several prior attempts to sell the casino. Burns said the issue of whether tenants can remain there should be worked out with Straub outside of bankruptcy court. (Parry/The Record)

U.S. Senator Bob Menendez (D-NJ) is expected in U.S. District court today in Newark by 1 pm to face charges that he used his seat to illegally benefit a personal friend and wealthy campaign donor, Salomon Melgen.

The 68-page, 14-count federal indictment released yesterday lists the Democrat’s alleged crimes, including claims that he advocated for Melgen’s personal and business interests in exchange for travel and political and legal-defense contributions, as well as for failing to disclose gifts from the Florida eye doctor. (Brush/PolitickerNJ)

Read the feds’ indictment against Menendez

Menendez, a U.S. Senator, and Salomon Melgen, a Florida ophthalmologist, were indicted today in connection with a bribery scheme in which Menendez allegedly accepted gifts from Melgen in exchange for using the power of his Senate office to benefit Melgen’s financial and personal interests, announced Assistant Attorney General Leslie R. Caldwell of the Justice Department’s Criminal Division and Special Agent in Charge Richard M. Frankel of the FBI’s Newark, New Jersey, Division. (PolitickerNJ) 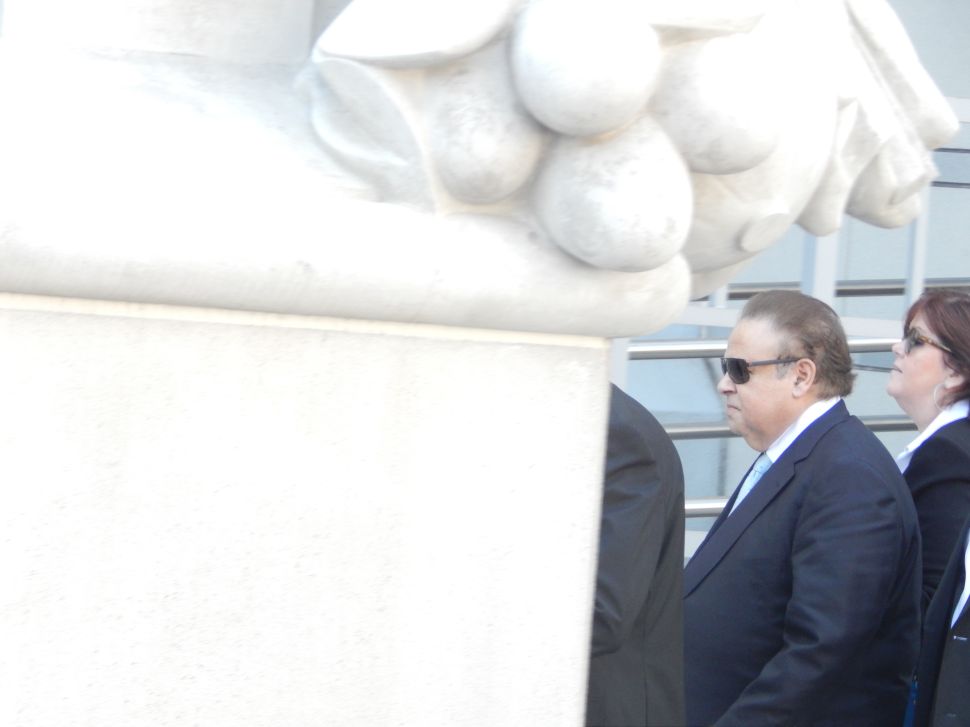